DOUGLAS, Ariz. (RNS) — We the People Ride is a 3,200-mile bike ride along the southern edge of the U.S., from San Diego, California, to St. Augustine, Florida. Led by Vote Common Good, members of the public are invited to join any length of the journey, both in person and online.

As the group rides, participants are finding and telling the stories of those most impacted by U.S. immigration policy and are sharing their experiences and treatment. Religion News Service will publish their dispatches from the road.

We pledge to look to those living on the borderland for answers, opportunities and changes to immigration policy.

We hope to connect and learn from immigrants to deepen our nation’s understanding and ability to call for just action at our border. In traveling to the border, we hope to remind the public that immigration is a human story, and that it is a Christian duty to fight for fair immigration policy.

We’re 800 miles into our ride and meeting the mayor of Douglas, Arizona, a town that shares a border with Mexico.

Douglas has one of the highest crime rates in the country, with 37 violent and property crimes per thousand residents. But this statistic, which on the surface seems like a political talking point, tells a much deeper story of resilience, faith and community.

RELATED: Dispatches from the U.S.-Mexico border: A ride for immigration justice

Mayor Donald Huish said during our conversation: “It’s a safe town. People across the country have this impression that it’s lawless. But nothing could be further from the truth. The values that people have here are based on family, belief in Christ. That permeates throughout our community, and allows us to reach out and try to help others.” Douglas residents recently called the town’s alleged dangers “hype” in interviews with Arizona reporter Tim Steller.

Views from the We the People Ride experience along the U.S.-Mexico border. Photo courtesy of Vote Common Good

But Douglas has taken an economic hit in the last decade, with skyrocketing unemployment rates and low property values. It relies heavily on the commerce that comes with being on the border — an industry that is negatively impacted by rising sentiments of border hysteria, often perpetuated by Republicans (including former United States presidents) who employ these kinds of narratives to further their “law and order” agenda. The border, Douglas’ main advantage, becomes a hindrance when viewed with unfounded fear.

Granted, a primary goal of the U.S. immigration enforcement system is to maximize compliance with the law. But, in order for a person to be compliant, they must first be presented with a digestible, accessible legal system that provides realistic pathways to follow. Our current system simply does not permit this. We offer immigrants impossible-to-maneuver legal barriers that only further exacerbate frustrations at the border and bar thousands from being able to enter the country legally.

“The policies that are made in Washington, D.C., affect us personally, day in and day out,” Huish said. He argues that common-good immigration practices would benefit the people of his town. Fearmongering tactics only further hurt border towns like Douglas.

“I would encourage the federal government to install more judges (and fair processes) for these people who are simply seeking a better life,” Huish continued. “We need these people to have a hearing within a week, so that they can go on and be with their families. And if it’s a ‘no,’ it’s a ‘no.’ But at least they’ll know.” We the People Ride participants bike near the U.S.-Mexico border. Photo courtesy of Vote Common Good

It was instructive to hear the mayor of a border town with a high crime rate calling for immigration policy that treats migrants and asylum-seekers as exactly who they are: human beings. The members of our ride were in complete agreement with him when he noted: “These people are hungry for freedom. Some are spiritually hungry, physically hungry. If you see little children who are starving, what are you going to do? You’re going to take the chance to get them up here.”

In Douglas, we learned how border hysteria has a material impact on American citizens. Despite this, the people of Douglas continue to call for the humane treatment of immigrants. Huish said to us: “If you want a wall, build a wall. But we need to open a gate and allow people to enjoy the blessings we have here in the United States.” 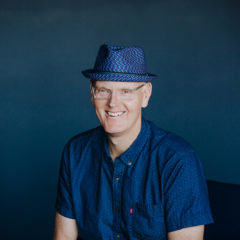 When we embarked on our ride, we committed to following the lead of those living on the borderland for the answers, opportunities and changes to border and immigration policy. This week, the mayor of Douglas, in his proximity to these issues, voiced his support for the fight for common-good immigration reform.

(Doug Pagitt is an evangelical pastor and the executive director of Vote Common Good. The views expressed in this commentary do not necessarily reflect those of Religion News Service.)

White Christian progressives can be nationalists too, ecumenical panel says

Pope to the Roman Rota: Listen with a pastoral heart

‘There was no real interest in their suffering’: Cardinal Marx apologizes to victims in wake of Munich abuse report

White Christian progressives can be nationalists too, ecumenical panel says