Matt Gaetz calls out US Soccer for reversal on anthem kneeling

Matt Gaetz calls out US Soccer for reversal on anthem kneelingcloseVideo

The U.S. is better off without a national soccer team than with one whose players won’t stand for the national anthem, U.S. Rep. Matt Gaetz, R-Fla., said Thursday.

The lawmaker was responding to news that the U.S. Soccer Federation — which oversees the men's and women's national teams — voted this week to repeal a policy requiring players to stand during the playing of "The Star-Spangled Banner" before their matches.

"You shouldn’t get to play under our flag as our national team if you won’t stand when it is raised,” Gaetz tweeted.

U.S. Soccer's ban on anthem kneeling took effect in 2017, after women's team player Megan Rapinoe kneeled during the national anthem in support of former NFL quarterback Colin Kaepernick, who started taking a knee before games in 2016 to protest police brutality. 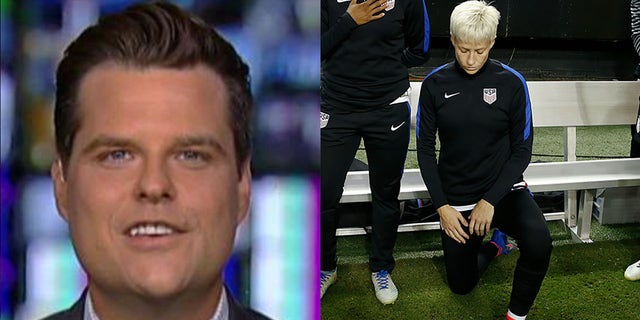 U.S. Rep. Matt Gaetz, R-Fla., would prefer that U.S. national soccer team players like Megan Rapinoe stand instead of kneel during the playing of the national anthem.

Kaepernick has been a free agent since his contract with the San Francisco 49ers expired in 2017. No teams have signed him since, raising allegations that the league was deliberately blackballing him.

Following the May 25 death of George Floyd in police custody in Minneapolis — and the protests and riots that erupted across the U.S. in response — NFL Commissioner Roger Goodell said last week that the league was “wrong” for how it handled national anthem protests.

“We, the National Football League, admit we were wrong for not listening to NFL players earlier and encourage all to speak out and peacefully protest,” Goodell said in an Instagram video.

The NFL overturned its own policy last week that called for punishing players who kneeled during the anthem.

He also added, “Defund US Soccer!” — his apparent answer to the "Defund the Police" movement.