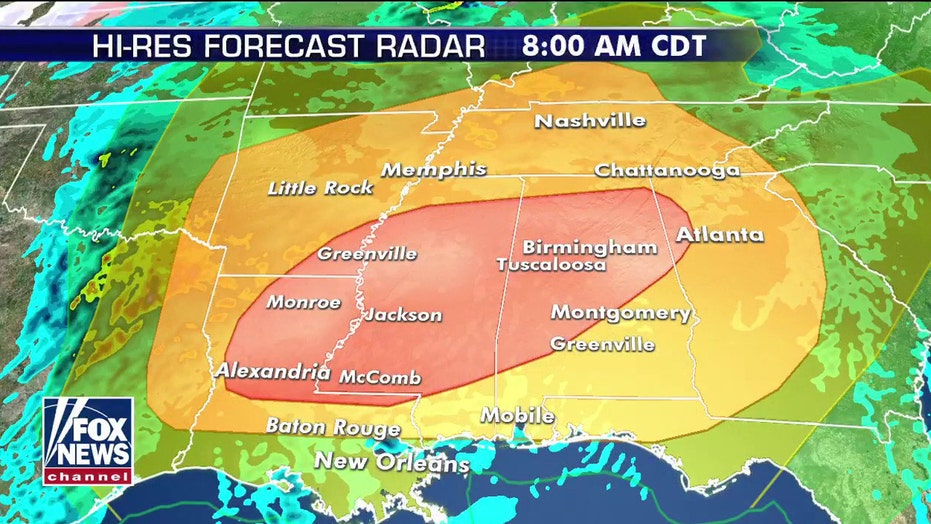 Millions of Americans in the Southeast are at risk as a powerful storm system mars the Easter holiday, bringing heavy rain, tornadoes and hail.

The National Weather Service's Storm Prediction Center said severe thunderstorms are likely into Sunday night, with the greatest threat in Louisiana through the Tennessee Valley.

"Big weather going on today," Fox News Chief Meteorologist Rick Reichmuth said on "Fox & Friends Weekend." "So many people across the South here on this Easter Sunday looking at the threat for some really severe weather."

According to Reichmuth, a "really complex storm system" across the central part of the country is also bringing "significant snow," up to a foot, in the upper Midwest. 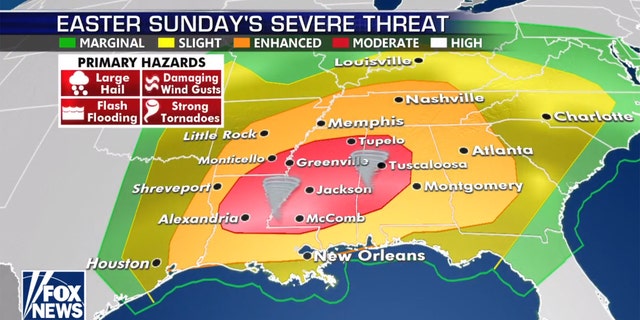 A severe weather outbreak is forecasted for Easter Sunday across the Southeast, with the greatest threats in Louisiana, Mississippi, and into Alabama. (Fox News)

"It's the southern side of this where we are going to be talking for some really potentially strong tornadoes throughout the afternoon and evening, everyone needs to watch," he said Sunday.

The storm center said some 95 million people may be impacted by the storms. More than 5.8 million people live in the area where the most dangerous weather was most likely, including Birmingham, Ala., and Jackson, Miss. 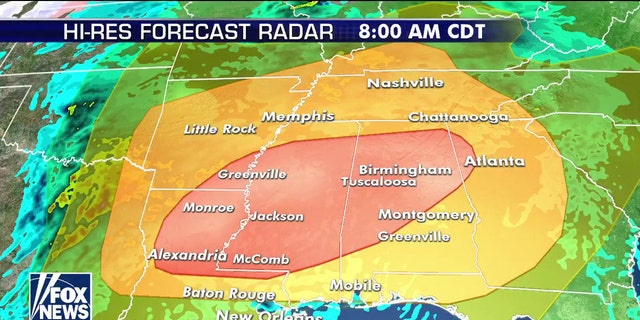 The greatest threat for severe storm si across Louisiana, Mississippi, Alabama, and into Georgia. (Fox News)

In those areas, thunderstorms may produce long-lived supercells "capable of producing significant tornadoes," the center said.

The NWS office in Jackson told residents to brace for the possibility of long-lasting tornadoes, wind gusts up to 70 mph and tennis ball-size hail through Sunday evening. Waves of storms with occasional lulls could continue into early Monday, with as much as 3 inches of rain possible.

"This could be one of our bigger events we’ve had in a long time around here," Weather Service forecaster Gary Goggins said in a public briefing on Facebook. "Take this seriously." 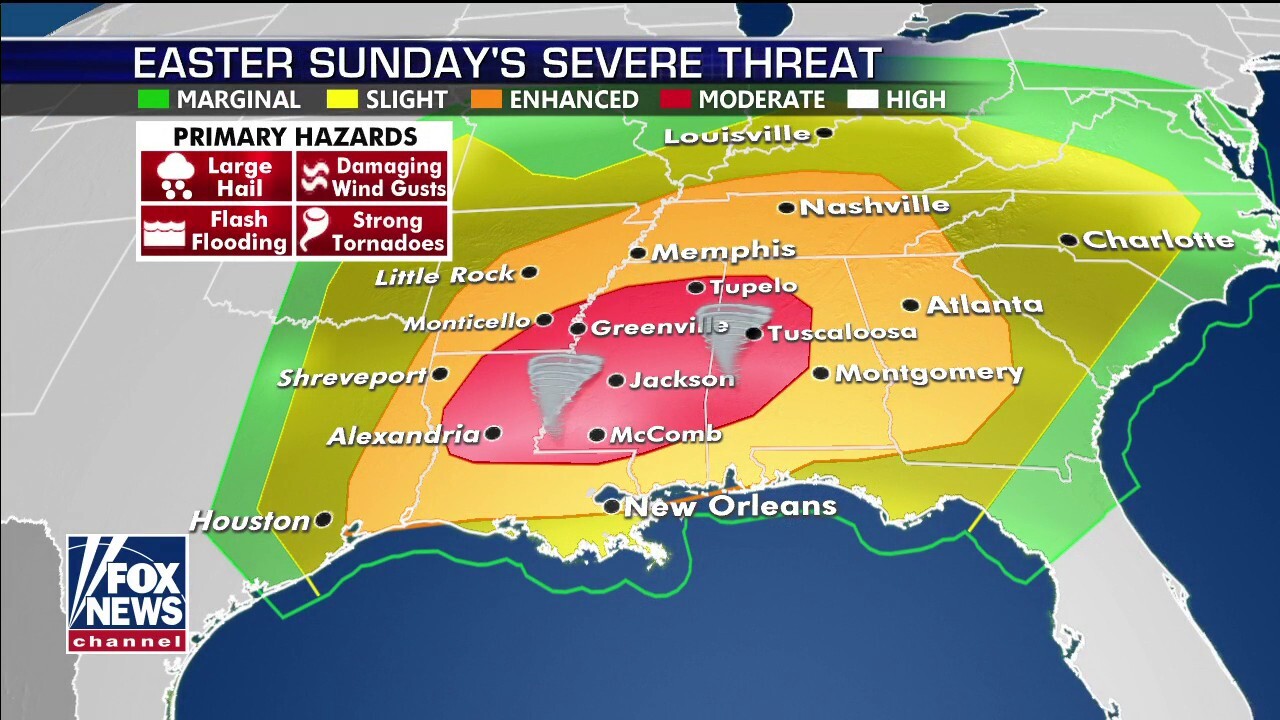 Communities around the region also prepared to open storm shelters, even though there was confusion in some municipalities over COVID-19 concerns.

In a video message posted on the town's Facebook page on Friday, Alexander City Mayor Thomas Spraggins said residents of the central Alabama town needed to find a safe place on their own since public buildings wouldn't be open as shelters because of the coronavirus.

“I'll be praying for everyone to have a safe and happy Easter,” he said. 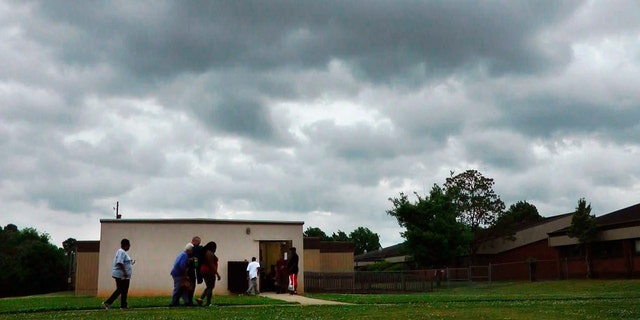 In this April 29, 2014 file image taken from video, people enter a community storm shelter during a tornado watch in Tuscaloosa, Ala. (AP Photo/Jay Reeves, File)

But by Saturday, the city's police department said shelters were opened after all, with temperature checks performed and gloves and masks being provided to anyone entering.

"Those that seek shelter will ENTER AT THEIR OWN RISK," the city said.

The initial decision against opening shelters was at odds with a message from Gov. Kay Ivey.

"Both the National Weather Service and the State Public Health Department remind Alabamians that the use of shelters and other resources take precedent, should the need arise," Ivey said in a statement Saturday, according to WBRC. 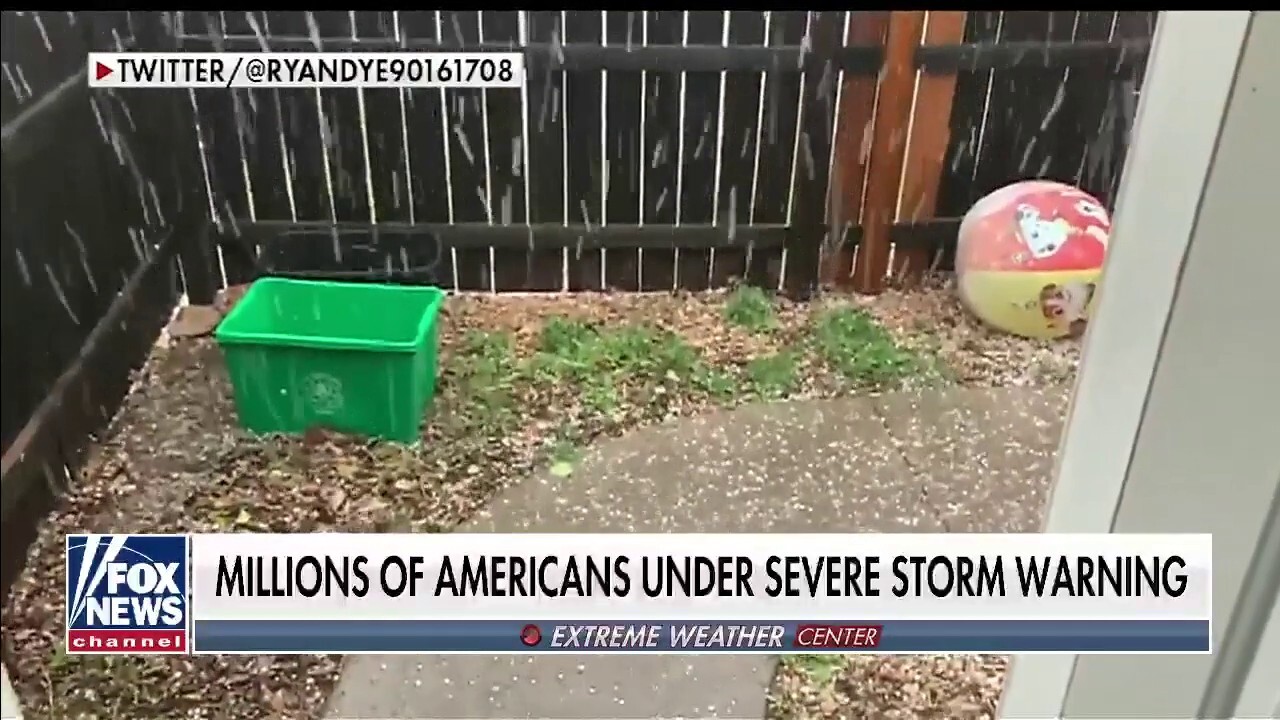 Forecasters and emergency officials in several states have offered guidance about using shelters as tornado season approaches during the pandemic. The NWS office in Birmingham.said in a statement that health officials are recommending during the pandemic the first priority during a tornado warning should be "to protect yourself."

Even with that guidance, some in the region said they were staying put even with strong storms in the forecast.

“I will not go to a storm shelter because of COVID-19,” Jackie Hill-Gordon told WBRC, adding that she and her husband feel they are secure at home with helmets, weather radios and other equipment in case they need it.

Severe thunderstorms began erupting Saturday in Texas, with residents in the town of Del Rio reporting hail the size of baseballs.

"This is gigantic. They're just falling from the sky," one person said on Twitter.

Another person reported that large hail had smashed through a skylight in their home.