Dubai: A UAE resident whose nap at Dubai Airport has now left him stranded inside Terminal 3 for two days is desperately calling on authorities to just quarantine him.

Arun Singh, 37, has been left to shower in the toilets and eat out of terminal restaurants after he fell asleep and missed the last flight back to India on Sunday. All flights in and out of the UAE have been suspended due to the ongoing coronavirus crisis.

Despite being a UAE residency visa holder he also can’t just exit the airport through arrivals because of the suspension of visa entrance amid the current lockdown.

“Since Gulf News published the first article on my situation on Monday there have been no developments,” said Singh, an IT professional at a UAE bank, who is originally from Pune, India.

“I’ve managed to meet up with six to eight other Indians in a similar situation and the Aide Service Office, which usually assists deported people has taken up to 15 passports including my own.

“The airport shuts tonight for two weeks due to the suspension of flights so I don’t know what I will do. The Indian consulate have no clue what happens next.

“My fear is that I’m being exposed to people from all over the world in one terminal and if I didn’t have coronavirus before I might have now.

“I made a mistake, I fell asleep and missed my flight I know, but I shouldn’t be punished like this. Isolate me, take me somewhere, quarantine me but don’t leave me like this,” he added, claiming that immigration officials had told him to go and sleep for 15 days when he tried to re-enter.

A spokesperson from the Indian Consulate told Gulf News, “Of Arun Singh we are not aware, but apart from that there are 22 people right now stranded at Dubai Airport and we are fully aware of their plight. The case has been taken up with UAE authorities to find a solution for these passengers.

“The consulate has provided ex gratia financial relief to meet their expenses at the airport and we are in constant touch with them.” 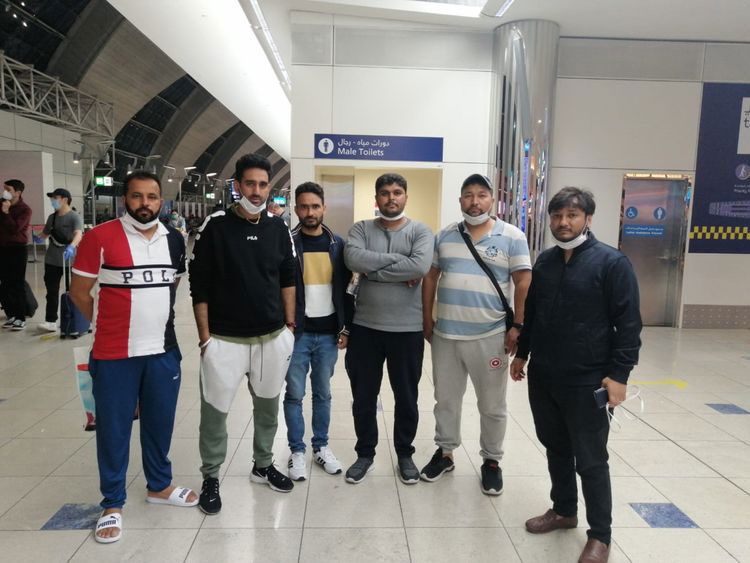 Elsewhere, for a fifth straight night, Deepak Gupta slept rough on a bench at Dubai Airport. An executive at a multi-national company, Gupta is among six Indian passengers stranded at Terminal 3 since March 18. The men arrived from European countries and had a connecting Emirates EK 510 flight to New Delhi later that evening.

However, they weren’t allowed to board the plane as India had imposed a ban on all incoming passengers from Europe, UK and Turkey following a travel advisory issued over coronavirus fears two days earlier.

“My wife is pregnant and needs me back. Please get us out of here,” pleaded Gupta when Gulf News spoke to him over the phone late Monday afternoon.

Another passenger, Ajmer Singh from Kangra, Himachal Pradesh, said he’s on the edge of a nervous breakdown. “Our situation is really bad and it doesn’t look like improving any time soon. Our families are worried about us.” he said.

The passengers said they are disheveled and desperate. “We have contacted the Indian consulate for help but all what they have got so far are assurances and some money towards meal allowance,” said Gupta

Vipul, Consul General of India in Dubai, said they are in constant touch with the men. “It’s unfortunate that they were allowed to board flights from Europe despite travel advisories issued on March 11 and then again on March 16,” he said.

Neeraj Agrawal, head of chancery and consul (Press, Information and Culture) at the Indian Consulate in Dubai earlier told Gulf News they are trying to resolve the issue. “We are aware of the case but there is only so much that we can do at this stage. The airport hotels are full so we can’t accommodate them there. We can’t fly them to India either. That said, we coordinating with the airlines and local authorities to relieve the plight of the stranded men,” said Agarwal.