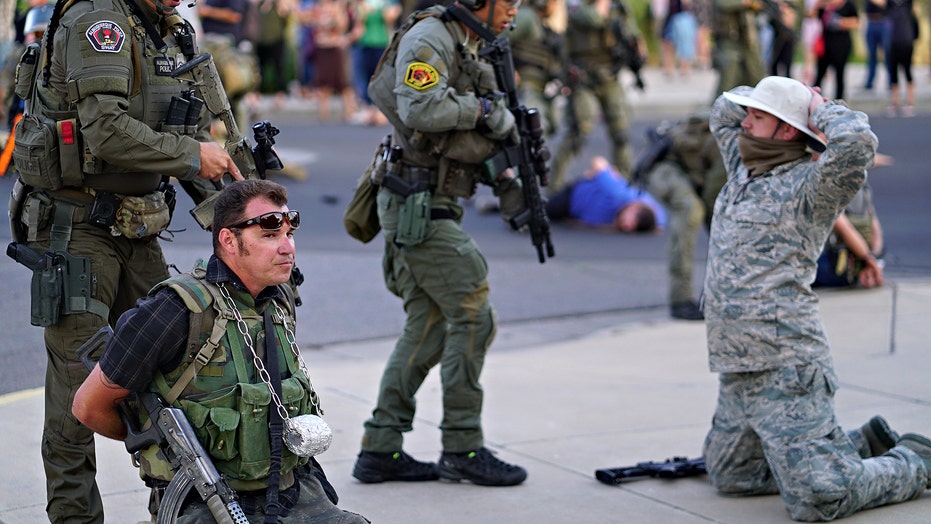 A man was shot after gunfire erupted at a demonstration in New Mexico on Monday, where protesters attempted to topple a bronze conquistador's statue outside an Albuquerque museum, authorities said.

The man was taken to a local hospital where he was listed in critical but stable condition, police said.

“The shooting tonight was a tragic, outrageous and unacceptable act of violence and it has no place in our city,” Albuquerque Mayor Tim Keller said in a statement. 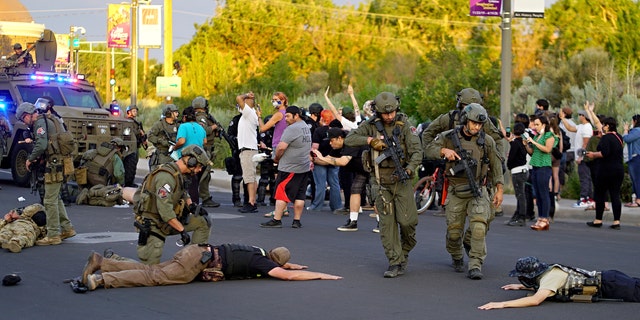 The shooting occurred during a clash between protesters and the New Mexico Civil Guard, a heavily armed civilian group armed who attempted to protect the controversial sculpture — a monument that features Spanish conquistador Juan de Oñate, according to the Albuquerque Journal. 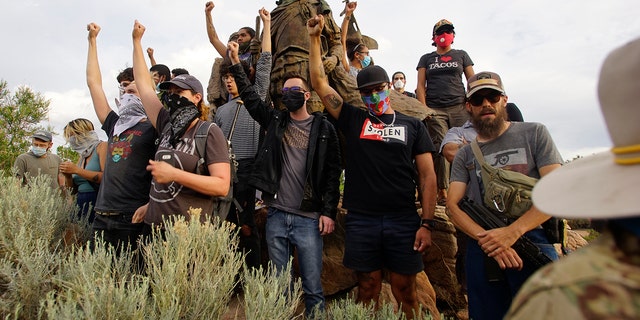 Protesters reportedly wrapped a chain around the statue and started tugging on it amid chants of: “Tear it down.” At least one person swung a pickaxe at the statue of New Mexico’s 16th-century colonial governor.

Gunshots could be heard down the street just moments later, with several people yelling "Somebody got shot," according to the Journal. At least five shots were fired by a single gunman after protesters started advancing on him, the paper reported. 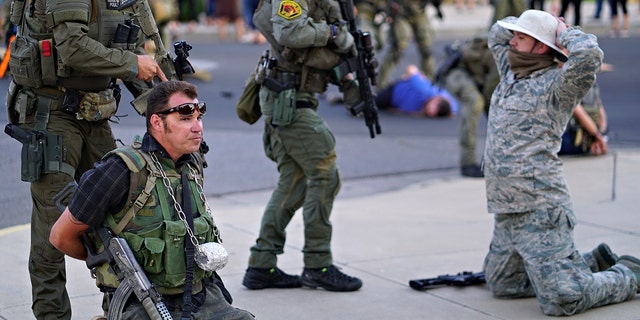 Albuquerque police detain members of the New Mexico Civil Guard, an armed civilian group, following the shooting of a man during a protest over a statue of Spanish conquerer Juan de Oñate on Monday, June 15, 2020, in Albuquerque, N.M. (Adolphe Pierre-Louis/The Albuquerque Journal via AP)

“We are receiving reports about vigilante groups possibly instigating this violence. If this is true will be holding them accountable to the fullest extent of the law, including federal hate group designation and prosecution," Albuquerque Police Chief Michael Geier said on Twitter late Monday.

Gov. Michelle Lujan Grisham, a Democrat, said in a statement that the armed individuals were there to menace protesters.

"There is absolutely no space in New Mexico any violent would be 'militia' seeking to terrorize New Mexicans," she said. "The instigators this evening will be rooted out, they will be investigated, and they will be held accountable to the fullest extent of the law."

Confederate statues and monuments to European conquerors have been removed in recent weeks following the death of George Floyd in police custody on May 25.

CHRISTOPHER COLUMBUS STATUES TORN DOWN, DRENCHED IN PAINT, DEFACED IN CITIES ACROSS COUNTRY

The violence came just hours after activists in northern New Mexico celebrated the removal of another likeness of Oñate that was on public display at a cultural center in the community of Alcalde. A forklift pried the bronze statue on horseback from a concrete pedestal to the cheers of bystanders. Several people also arrived to defend the tribute to Oñate. 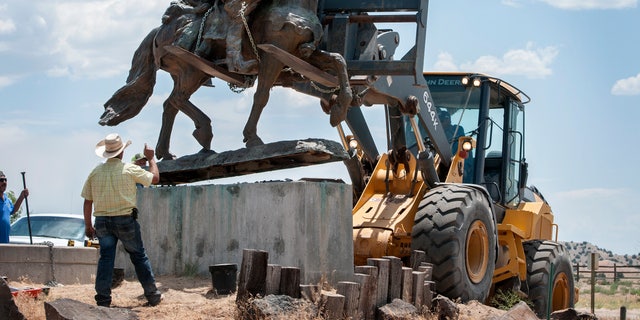 Rio Arriba County workers remove the bronze statue of Spanish conqueror Juan de Oñate from its pedestal in front of a cultural center in Alcalde, N.M., Monday, June 15, 2020. Crowds of people for and against the removal lined Highway 68 near the center. (Eddie Moore/The Albuquerque Journal via AP)

The Oñate statues have been a source of criticism for decades.

Oñate, who arrived in present-day New Mexico in 1598, is celebrated as a cultural father figure in communities along the Upper Rio Grande that trace their ancestry to Spanish settlers. But he’s also reviled for his brutality.

To Native Americans, Oñate is known for having ordered the right feet cut off of 24 captive tribal warriors that was precipitated by the killing of Oñate’s nephew.