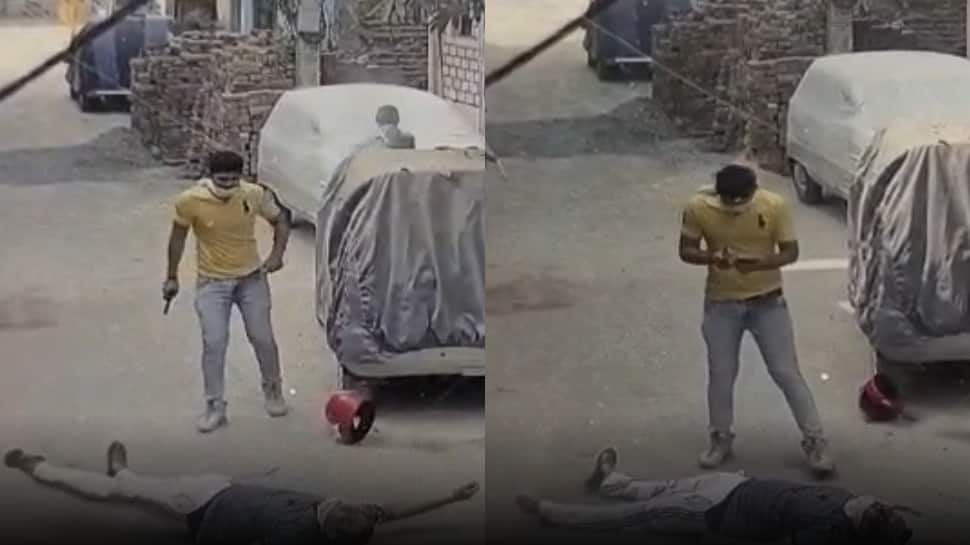 New Delhi: In one of the shocking incidents in the national capital, a man has shot dead a person in the Mohan Garden area and clicked photographs following the gruesome murder.

The incident that took place on October 22, 2020, on the 55 ft road near Nawada Housing Complex in Uttam Nagar has been recorded in a CCTV camera.

The 17-second long video shows the accused firing at the deceased from the point-blank range. He is seen firing two to three bullets following which he takes out his mobile phone and clicks the photograph of the body.

Watch: (Viewer discretion advised as the video contains visuals that some viewers may find disturbing)

According to Delhi Police, the accused Pawan Gahlot has been arrested and has confessed that he murdered Vikas Mehta to take revenge for his brother's death.

The police registered an FIR at the Mohan Garden station after a statement of an eye witness who stated that Praveen Gahlot (Pawan's brother) was murdered by a person named Vikas Dalal in May 2019 and Dalal had also died during the cross firing by the police.

Dalal was an associate of Pradeep Solanki, who had a link with deceased Vikas Mehta. Therefore Pawan Gahlot suspected that Vikas Mehta was involved in the conspiracy of murder of his brother. Due to the same, Gahlot wanted to take revenge from Mehta and murdered him on October 22.

Also read | Kingpin of 'namaste' gang involved in over 100 robberies in Delhi, held

"Pawan told that prior to his brother's death, his brother used to tell him that Mehta could harm him, so he always suspected Mehta's involvement in his brother murder," said Delhi Police.