Sales figures for the month of February for Mahindra & Mahindra are out and going with the trend the company has seen a major cut in sales. M&M has reported a 42 per cent fall in its total vehicle sales in February at 32,476 units while also reporting 58 per cent drop in sales of passenger vehicles. 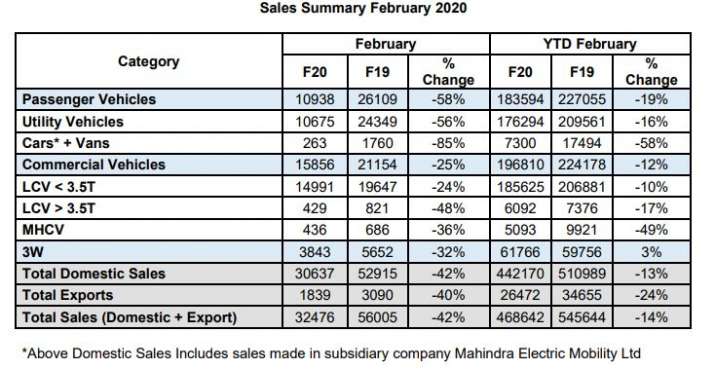 Mahindra sold 436 vehicles in the medium and heavy commercial vehicles segment in February 2020, compared to 686 units during the same month last year.

Commenting on the performance, Veejay Ram Nakra, Chief of Sales and Marketing, Automotive Division, M&M Ltd said: "The ramp-down of BS-IV vehicle production has been in line with our plan for February. However, because of the unforeseeable challenges on the parts-supply from China, our BS-VI ramp-up has been affected."

"This has resulted in a high de-growth in our billing volume for February and our dealer inventory is, now, under 10 days. Going into March, we anticipate the challenge on parts-supply to continue for another few weeks, before we get back to normalcy," he said.

Government plans to auction 22 mineral blocks in next two months