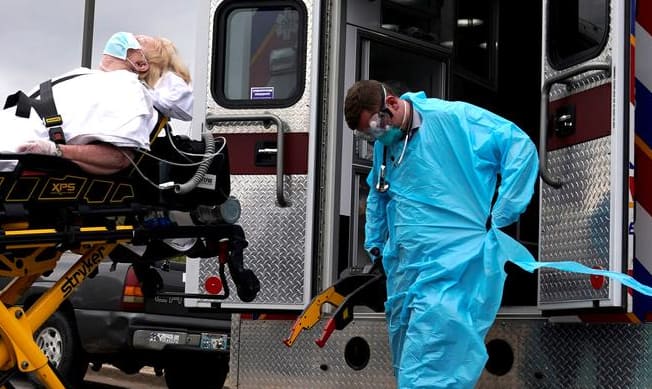 Mumbai city, however, reported 2,360 new infections on Wednesday, which pushed its case count to 1,90,264, while the death toll rose to 8,604 with 49 coronavirus patients dying in the state capital.

Out of 479 fatalities recorded on Wednesday, 251 were reported in the last 48 hours while 127 had taken place a week back. Another 101 deaths had taken place more than a week ago, the health department said.

1,392 COVID-19 patients from outside Maharashtra have received treatment in the state, while 120 such patients have died. A total of 18,75,424 people are currently under home quarantine in the state while 34,457 are in institutional quarantine.

Four COVID-19 centres to be upgraded in Aurangabad

At least four COVID-19 care centres in Aurangabad will be upgraded as dedicated health centres with increased bed capacity amid the rise in infections in the city.

The civic body has shut its testing centres at the city's entry points, as it is not possible to test everyone in the Unlock phase, municipal commissioner Astik Kumar Pandey told PTI.

Four COVID-19 care centres in Aurangabad city will be upgraded to dedicated COVID-19 Health Centres and at least 1,000 beds will be added at their facilities, the official said, adding that extensive testing will continue in the city and almost 20 per cent of the adult population in the city limits has been tested so far.

Maharashtra Chief Minister Uddhav Thackeray on Wednesday expressed confidence that his governments just launched My family – my responsibility campaign would strengthen the fight against COVID-19 in the state which has recorded more than 12 lakh cases so far.

In a video conference meeting with Prime Minister Narendra Modi, Thackeray said case fatality and COVID-19 positivity rates are also expected to come down due to the mass health campaign aimed to curb the coronavirus spread.

Thackeray told the PM his government was in the process of setting up tele-ICU system in rural areas of Maharashtra and also post-COVID care centres for those who have recovered from the infection.

The 'My family, my responsibility campaign launched on September 15 is aimed at effective healthcare education for control of the pandemic.

It is being conducted in two phases- spread over September and October- with target to reach out to 2.25 crore households twice. Besides creating public awareness about COVID-19, the campaign envisages conducting health checks to identify symptoms followed by proper treatment of patients.

Thackeray requested the PM to address the nation regarding the country's fight against COVID-19 in the backdrop of upcoming festivals, apprising the PM about steps being undertaken by his government to curb the spread of COVID-19 and said the target is to have 1.5 lakh tests every day.

Breonna Taylor Decision Live Updates: One Officer Charged, but Not for Her Death

Breonna Taylor Decision Live Updates: One Officer Charged, but Not for Her Death