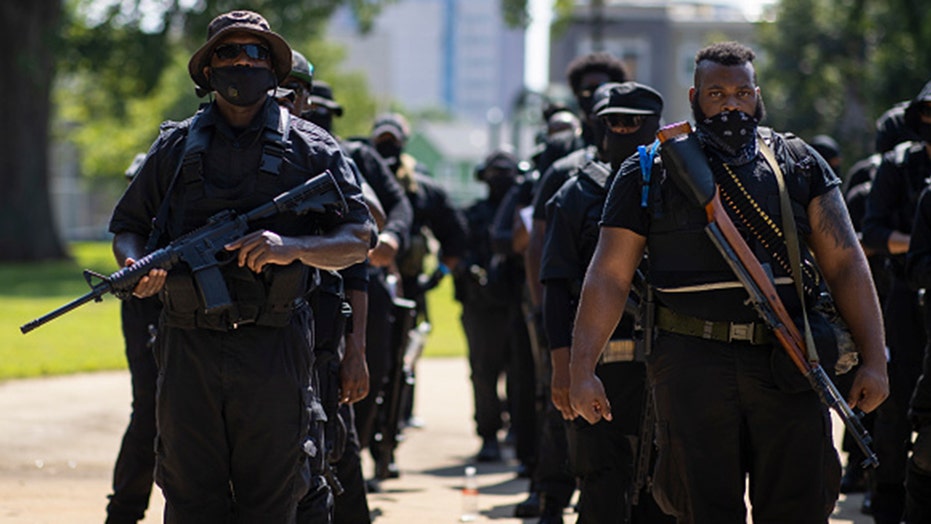 Gunshots erupted during a planned protest in Louisville, Ky. Saturday, as heavily armed militia from the “Not F—ing Around Coalition” (NFAC) took to the streets to decry the death of Breonna Taylor.

Multiple people were injured in the shooting near Baxter Square Park and several were transported to the hospital, MetroSafe confirmed to Wave 3.

At least two people were taken out of the protest on stretchers near Jefferson St., WHAS11 reported on Twitter.

Protesters ducked behind cars and scattered to flee the area, the reports said.

Initial reports suggested an NFAC militant accidentally shot himself with a shotgun, but reports are unconfirmed.

One of the members of the NFAC spoke to throngs of protesters and said “we had a little accident, it happens,” a WHAS11 reporter wrote on Twitter.

Earlier in the day, police from the Louisville Metro Police Department were on high alert, aware of the possibility of violence from highly armed militants dressed in all black–many of whom are not from Kentucky– claiming they are defending the Constitution.

Members of a protestor group affiliated with NFAC, most carrying firearms, gather to march on July 25, 2020 in Louisville, Kentucky. The group is marching in response to the killing of Breonna Taylor. (Photo by Brett Carlsen/Getty Images)

Other racial justice protesters who have staged peaceful marches daily since the death of Taylor in March faced off with NFAC militants, saying they don't agree with their tactics of displaying guns and weaponry.

The Louisville organization of Black Lives Matter has distanced itself from the coalition, accusing the armed group of being “outside agitators," WDRB reported.

Protesters across groups have demanded justice for Taylor, a 26-year-old EMT, who was shot eight times as officers burst into her home on Springfield Drive, firing off over 20 rounds, as they were conducting a narcotics investigation on March 13

No drugs were found in the house.

One of the three officers involved in the deadly instance was fired from the department last month, and two other officers have been placed on administrative leave.

Kerala plus one results 2020 results to be announced soon; know how to check on keralaresults.nic.in

Kerala plus one results 2020 results to be announced soon; know how to check on keralaresults.nic.in