Arsenal's class of 2003-04 can breathe easy: Liverpool will not be joining them as Premier League “Invincibles.”

“Phew…” was the immediate reaction from Arsenal's Twitter account after Liverpool collapsed to its first league loss of the season on Saturday, a 3-0 defeat at Watford – a team languishing in the relegation zone.

It marked the end of a 44-match undefeated streak and a record-tying 18-match winning run for Liverpool in the league.

Juergen Klopp's team headed to Vicarage Road as the champions-in-waiting – with its record 22-point lead – and needing to get through 11 more matches to also become only the second side after Arsenal to complete a full season unbeaten since the start of the Premier League in 1992. Preston also went through the 1888-89 season undefeated. 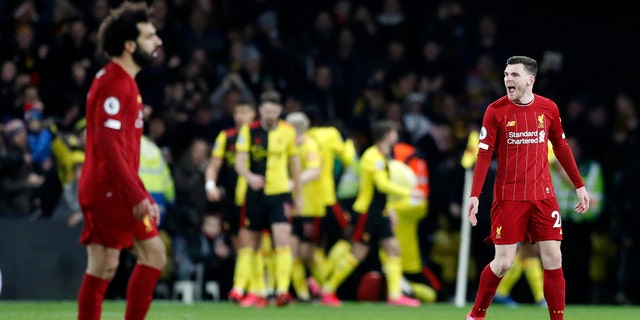 Liverpool was five games short of matching Arsenal's 49-match unbeaten streak in the Premier League from May 2003 to October 2004. That run ended when Arsenal lost 2-0 at Manchester United.

Few could have foreseen the manner of Liverpool's meltdown against Watford, which scored all of its goals in the second half through Ismaila Sarr (two) and Troy Deeney.

Thankfully for Liverpool fans desperate to see their team back on top of English soccer for the first time in 30 years, the loss is far from terminal. 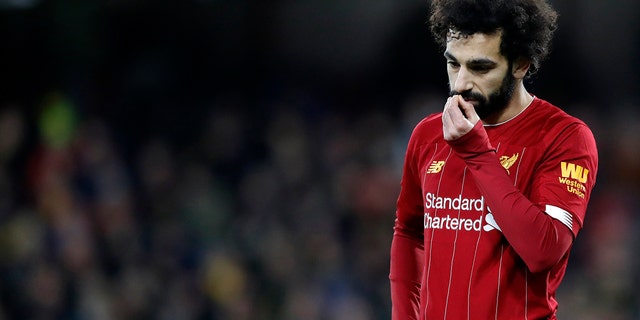 Four wins from their last 10 games will see the Reds become champions for the 19th time.

“There is no reason for panic,” Liverpool defender Virgil van Dijk said.

“The (unbeaten) record, and the talk of the records, is all media. We just try to win every game ahead of us.”

The performance will be a major concern, though, coming soon after a 1-0 loss to Atletico Madrid in their first leg in the Champions League's last 16.

Indeed, Liverpool's players have been far below their usual high standards since returning from the Premier League's first midseason break, having edged past last-place Norwich 1-0 and coming from behind to beat another team fighting relegation, West Ham, 3-2 on Monday. The loss to Atletico was sandwiched between those league matches.

The absence of captain Jordan Henderson, who sustained a hamstring injury against Atletico, has been significant, while the defense looked ragged against Watford with Dejan Lovren filling in at center back for Joe Gomez.

Liverpool's next game is at Chelsea in the FA Cup on Tuesday.

“We want to strike back, we want to show what we’ve been doing the whole season,” Van Dijk said. “That’s the only way forward.” 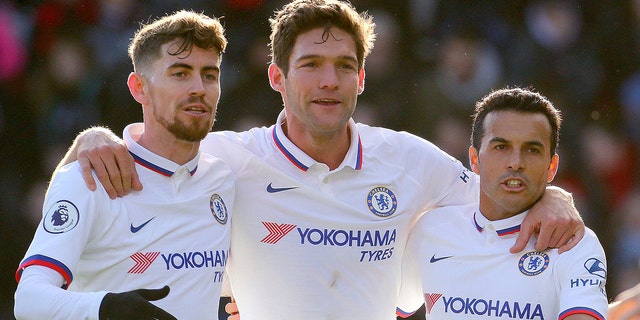 Chelsea's Marcos Alonso, centre, celebrates with team-mates Jorginho, left, and Pedro after scoring his side's first goal of the game against Bournemouth, in the English Premier League soccer match at the Vitality Stadium in Bournemouth, England, Saturday Feb. 29, 2020. (Mark Kerton/PA via AP)

While Chelsea’s forwards continue to struggle to score, at least the team can rely on its left back to find the back of the net.

Marcos Alonso made it three goals in two games since returning to the lineup after a two-month absence when he scored twice – including an 85th-minute equalizer – in a 2-2 draw at Bournemouth.

"Marcos Alonso has had a big week,” Chelsea manager Frank Lampard said, “but I don't want my left back top of the scoring charts. I want our attackers scoring goals and they haven't.”

Alonso netted what proved to be the winning goal against Tottenham last weekend, only to get sent off in the 3-0 loss to Bayern Munich in the Champions League’s last 16 on Tuesday.

United visits Everton on Sunday. They are two of the eight teams within nine points of Chelsea. 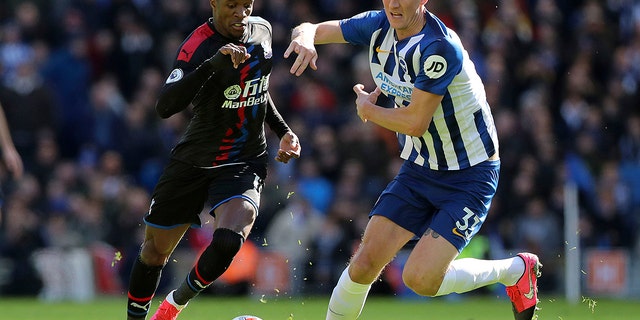 Just when his team looked like being sucked into a relegation battle, former England manager Roy Hodgson has inspired Crystal Palace to back-to-back victories and most probably another season in the Premier League.

The 72-year Hodgson is poised for talks with the Palace board about a contract extension next week, and can go into them feeling fairly content about another solid season’s work in the wake of a 1-0 win at Brighton.

“If they go well,” Hodgson said about upcoming games against relegation candidates Watford and Bournemouth, “we can kiss relegation goodbye.”

The same cannot be said for Brighton after being hit by the sucker-punch of a goal against the run of play by Jordan Ayew.

Brighton is now only one point above the relegation zone. 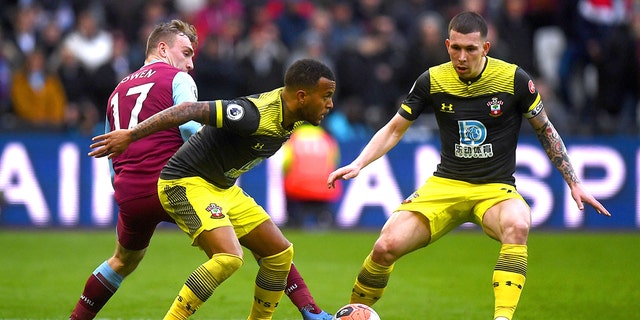 Can the signing of a player from the second-tier League Championship be the catalyst for West Ham in its bid to secure safety in the Premier League?

Jarrod Bowen’s lively performance in the 3-1 win over Southampton suggested so.

Handed his first start since joining from Hull in the January transfer window, Bowen opened the scoring with a deft chip over goalkeeper Alex McCarthy and was a constant danger with his movement and pace in behind.

"That's the way it went in my dreams last night,” Bowen said.

West Ham manager David Moyes has eased Bowen into the team, despite the player’s superb scoring record – he struck 16 goals for Hull this season – and the team’s lack of potency of late.

Sebastian Haller and Michail Antonio also scored for West Ham, which moved out of the bottom three and above Bournemouth and Aston Villa in the standings with its first win since Jan. 1.

If only Hasenhuettl had a defense boasting the tenacity of Newcastle and Burnley. Clear-cut chances were at a premium in their match at St. James’ Park, which finished 0-0.