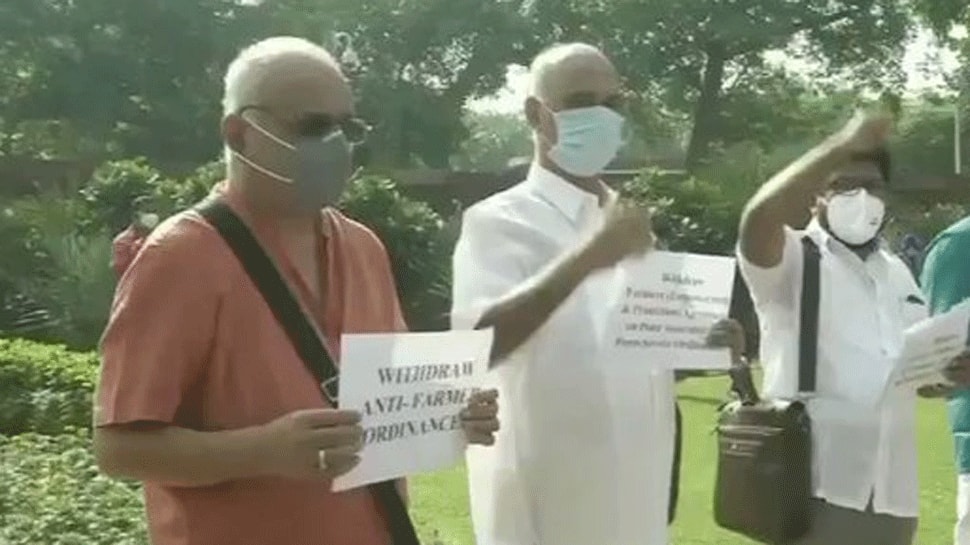 New Delhi: Members of the Left parties on Tuesday (September 15, 2020) staged a protest inside the Parliament premises over their demand for the withdrawal of `anti-farmer policies`.

According to the reports, the Left MPs staged the protest near the Mahatma Gandhi statue and raised slogans in favour of the farmers of the country. They were demanding the withdrawal of `anti-farmers policies` brought by the Centre through ordinances.

The protest comes a day after Union Agriculture Minister Narendra Singh Tomar introduced the Farmers` Produce Trade and Commerce (Promotion and Facilitation) Bill, 2020 for the creation of an ecosystem where the farmers and traders enjoy the freedom of choice relating to the sale and purchase of farmers` produce.

The Agriculture Minister also introduced the Farmers (Empowerment and Protection) Agreement of Price Assurance and Farm Services Bill, 2020 to provide for a national framework on farming agreements.

It protects and empowers farmers to engage with agribusiness firms, processors, wholesalers, exporters or large retailers for farm services and sale of future farm produce at a mutually agreed remunerative price framework in a fair and transparent manner.

Explained: Why vegetable prices are soaring in Delhi

Explained: Why vegetable prices are soaring in Delhi