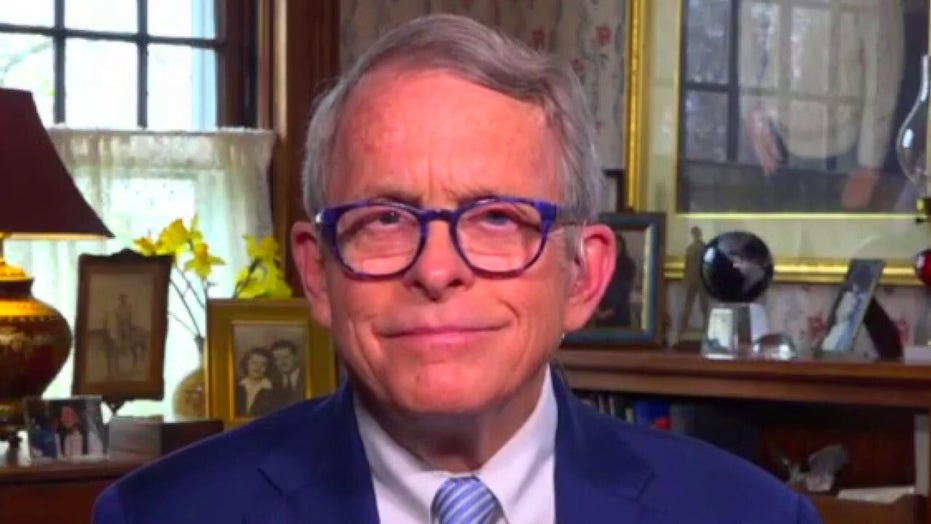 A large crowd of at least 100 protesters gathered Monday outside the Ohio Statehouse in Columbus, demanding Gov. Mike DeWine end a statewide stay-at-home order meant to curb the spread of the coronavirus, according to reports.

Meanwhile, DeWine — a Republican — is also facing pressure from several GOP lawmakers in the Ohio General Assembly to reopen the economy to relieve jobless Ohioans, even if some social distancing measures must continue in the coming months, The Columbus Dispatch reported.

Holding signs that read “The cure is worse than the virus,” some demonstrators outside in the statehouse atrium were seen on video banging on the windows of the media room, WCMH-TV in Columbus reported.

Other protesters waved American flags and chanted “We are not afraid” and "O-H-I-O Acton's got to go.” They held signs with other messages, including: “Open Ohio: We want our rights back" and "My inherent rights don't end where your fear begins."

The protest was meant to interrupt DeWine, Lt. Gov. Jon Husted and Ohio Department of Health Director Dr. Amy Acton’s daily press conference. But to adhere to social distancing measures, the officials are positioned in another room in the courthouse separate from members of the press. By Tuesday, the Ohio Statehouse had installed black curtains to block the windows so protesters wouldn’t be able to look inside the media area, WBNS-TV reported.

It appeared that most protesters were not wearing personal protective equipment (PPE) and did not adhere to the Centers for Disease Control and Prevention’s (CDC's) guidelines to stand at least 6 feet apart, according to Cleveland Scene. Scott Shoemaker, a well-known "anti-vaxxer" advocate, began a Facebook Live showing the rally.

It was not the first protest organized outside the Ohio Statehouse amid the stay-at-home order. Last week, a group of about 75 people gathered to protest business closures, Ohio State University’s WOSU Public Media reported.

Ohio schools have been closed since March 12. DeWine issued a statewide stay-at-home order by March 22. The measure is set to expire May 1, but the governor has said he’s considering an extension.

DeWine has been championed for his success in flattening the curve, as he was one of the first officials to implement statewide social-distancing restrictions amid the global coronavirus pandemic. Now, some GOP lawmakers claim the governor is deciding to keep businesses closed based on projections that are no longer or were never accurate, according to The Dispatch.

Ohio recorded at least 7,153 confirmed cases of coronavirus, with at least 309 deaths by Tuesday, according to the Ohio Department of Health.

“We need to get the economy open, even if that means social distancing of some sort for months to come,” Sen. Andrew Brenner, a Republican representing the state's 19th District, wrote in a Facebook post. “We can’t stay like this much longer, and the hundreds of thousands of Ohioans who’ve lost their jobs or the thousands of small business owners can’t keep doing this either, or their lives will be irreparably destroyed.”

“Many of the earliest predictions were based on what we now know to be flawed data models,” state Rep. Todd Smith, R-Germantown, wrote in a letter to the governor. “We now have actual data that has shown the effect of the virus to be much less than anticipated.”

“Here in my district and across the state, our small business owners are being crushed under the current restrictions. They do not think it necessary to destroy their businesses and the state economy for the actual effect they are seeing due to the virus.”

Woman walking turtle in Rome is fined during coronavirus lockdown