Police say the gangsters achieved their intention of creating panic.

Residents set up makeshift checkpoints with burning tyres in border communities between Lagos and Ogun states after forming vigilante groups to protect themselves from the imaginary armed robbers.

For days, groups of anxious residents – young and old, and mostly male – kept night vigils on their streets, armed with machetes, bottles and other household items.

They were braced for an attack that never came.

There were rumours that a group of up to 200 armed robbers were on the rampage.

But the police have told the BBC that it was a widespread hoax by gangsters to create panic before attacking residents and that people had unwittingly assisted them by posting messages on social media.

However, the police insist that no-one was actually attacked.

Nigeria's President Muhammadu Buhari on Monday announced a two-week extension of a lockdown in three states, including the capital Abuja, to curtail the spread of coronavirus, but made no mention of the security situation in states where residents are concerned that the economic hardship caused by the lockdown has led to an escalation in crime.

How did the rumours start?

Pictures and videos of residents bracing for attacks started surfacing last Thursday with the hashtags #OgunUnrest and #LagosUnrest trending for days on Twitter.

But there was no proof of armed robbery attacks in the neighbourhoods, according to the police.

The first wave of reports said there were attacks around the Agbado, Sango and Ijoko areas of Ogun state that borders Lagos.

On social media some residents claimed they had heard gunshots and others said they had seen people breaking into homes and in some cases maiming occupants.

This user said she was not able to sleep as her "hood was being robbed."

This video showed residents of a community sharpening their machetes and "preparing for battle".

It’s World War3 in Ogun State as Residents are preparing for battle, this will be highly unnecessary if our security agents act fast. It's broad daylight and people don't feel secured what if it's midnight?#OgunUnrest
pic.twitter.com/XoqomvGMkV

Ogun state police spokesman Abimbola Oyeyemi told the BBC that they received more than 300 calls of "fake attacks" on Saturday.

"On one occasion, someone called to report the death of seven people but when police got there, there was nothing.

"The caller was miles away from the purported incident he was reporting," he said.

He said a gang war had started in Ogun state after the death of one of the leaders in a fight, leading to the arrest of 150 gang members, while hundreds of them fled into Lagos state.

Rumours of armed attacks spread to Lagos by Friday and there were videos and photos online, some showing bloodied "gangsters" with their civilian captors who accused them of being robbers.

Things further escalated on Sunday as there were reports of daytime attacks in the Ogba area of Lagos, a popular neighbourhood for middle-class workers.

So were there armed robbery attacks?

The police say there have been no armed robbery attacks, at least on the scale that has been reported on social media.

Lagos police spokesman Elkana Bala told the BBC that they had arrested 100 gang members who came into the state from Ogun following the gang war.

He said that the gangsters had created panic by distributing messages to frighten people.

"They know it is difficult to hit an organised community so they [gangsters] want to first disorganise them [residents]," he said. 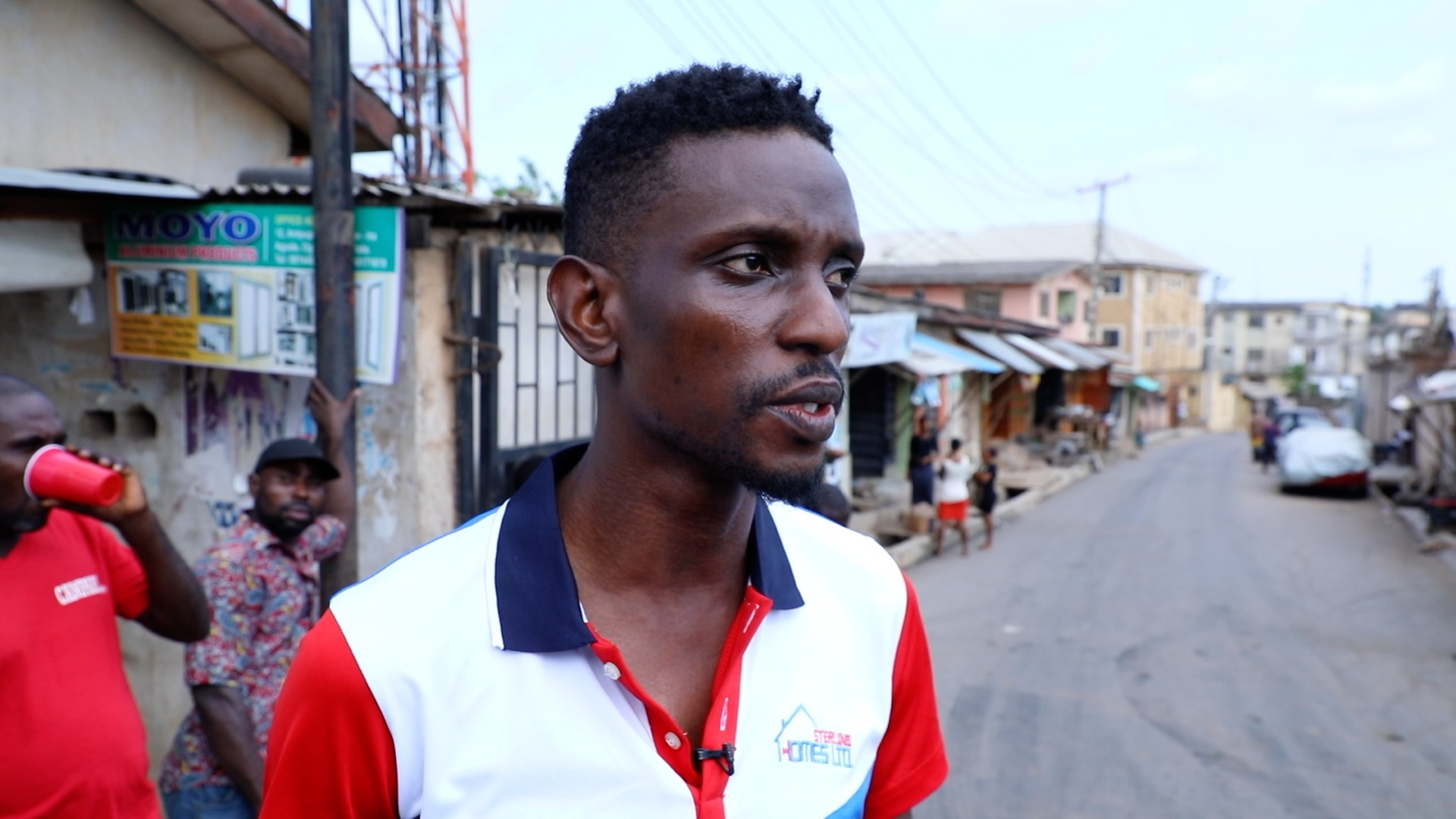 We heard that there were some guys robbing around the area, so there was panicking."Deji Francis
Ogba resident

He said the vigilante groups compounded the problem as their weapons and the tyres they burnt let to further panic, with some residents mistaking them for robbers.

What did residents say?

On social media, the reaction has been almost hysterical, with one resident claiming she had gone into a dog's cage to hide from the robbers.

The post was later deleted as she said it was a joke.

Others said the robbers were either at their doorsteps or at the neighbours and that the police had not responded to calls.

On the streets the rumour-mill was in full flow. Everyone had heard about attacks in other streets, but not at theirs. No-one had witnessed a robbery incident.

Jamiu Ayofalaji, who lives in the Ogba area of Lagos, said he heard gunshots and mobilised other residents to burn tyres to let the "robbers know that we are not sleeping".

He said he did not see any armed robbers in his three days of keeping a night-vigil.

Deji Francis also heard gunshots and that "some guys were robbing in the area so there was panicking," but he did not see anything.

"We heard from reliable sources that the gangsters were in a neighbouring street so we came out to protect themselves," said Olajide Boladale at Ogba, as a group of men scrummed around him.

"We are with sticks and other things to defend ourselves," he said.

Who are the gangsters?

Lagos has long had a problem with organised youths called agberos, or area boys, who extort levies from businesses and residents.

Their petty thievery are generally ignored by authorities in a state struggling with high youth unemployment.

But the recent "attacks" were allegedly masterminded by more organised gangs with a militia-styled chain of command.

These gangs, called cults in Nigeria because of their diabolic initiation processes and body scars, seek to control territories and commit crime.

There are fears that with businesses shut because of the lockdown, the gangs might resort to more daring attacks on homes to get money.