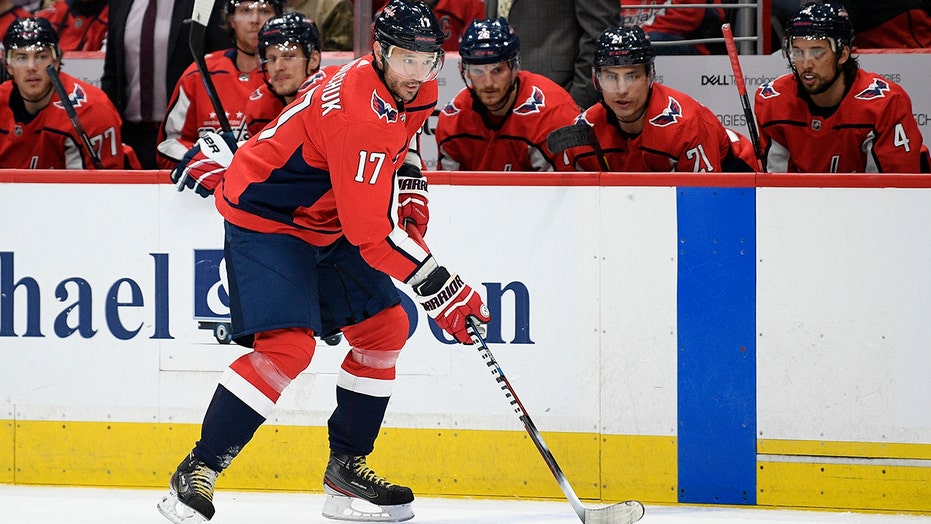 Ilya Kovalchuk and Brenden Dillon broke bread in a Northern Virginia restaurant, leaving their temporary home away from home hotel and swapping stories.

The Washington Capitals' two newcomers bonded over their shared experience of playing in the NHL and adjusting to a new life. That’s just about where the similarities end because Kovalchuk's journey has taken him to the ends of the earth and back.

Kovalchuk’s trade to the Capitals marked another twist in a career ranging from national hero to aging reclamation project. A gold medal winner and Olympic MVP in 2018, the once-feared Russian sniper was a disappointment in Los Angeles, a revelation in Montreal and is now just one of the guys with the Capitals in his pursuit of the Stanley Cup.

“It’s no more trade deadlines,” the 36-year-old winger said with a wry smile. “It’s always new. You come, you meet the new people. For me it was easier because I knew the coach, I knew a lot of guys on the team. But still to learn the system and get used to the way the guys play and all the routine, it’s a lot. But it’s OK. I love it.”

Kovalchuk is loving the sport again on a team with good friend Alex Ovechkin and their fellow countrymen, Evgeny Kuznetsov, Dmitry Orlov and Ilya Samsonov. He also knows coach Todd Reirden because the two played together with the Atlanta Thrashers in 2001-02 and became fast friends.

A homesick Kovalchuk left the NHL in 2013 and played five seasons back home in the Kontinental Hockey League. Once he decided to return, the road back wasn't smooth.

Kovalchuk didn’t play up to the expectations of an $18.75 million, three-year contract signed with L.A in the summer of 2018; he put up just 43 points in 81 games while struggling under two coaches. He agreed to mutually terminate his contract in December after it was clear the fit with the Kings wasn’t a good one.

“It just didn’t work,” Kings general manager Rob Blake said. “You’ve got to be able to cut a tie and move on.”

Kovalchuk signed with the Canadiens for a pro-rated league minimum $700,000 salary and thrived. He saw more ice time, scored three game-winning goals and recouped his reputation in NHL circles.

Montreal coach Claude Julien called Kovalchuk “the ultimate pro” and “an easy guy to like.” A pre-trade deadline game at Washington gave Capitals brass a chance to see what Kovalchuk could do and ponder what he might bring to a title contender.

It was clear this wasn’t the same Kovalchuk who languished in a limited role in L.A.

“To completely turn it around the way he did, to be as productive and to have as much impact as he had on the Montreal team both on and off the ice, their manager (Marc) Bergevin, he couldn't say enough good things about the character of the guy and the way he handled himself,” Capitals GM Brian MacLellan said. “So many good things have been said about him on and off the ice in Montreal that we basically thought it was a no-brainer to add him."

Kovalchuk also had to make a decision. Montreal had deals worked out to trade him to Boston or Washington, and he chose the Capitals over the NHL-leading Bruins.

Kovalchuk said he liked the way the Capitals played. It also didn’t hurt that he’d be the team’s fifth Russian player and has talked with Ovechkin about being teammates from the time they were teenagers.

“You never know what’s gonna happen, but yeah sometime in the summer (we said) it would be nice like if you’re gonna be one day on Washington Capitals team,” said Ovechkin, who MacLellan consulted before trading a third-round pick for Kovalchuk. “I said: ‘Yeah, let’s do it. If we can take him, why not?’”

Reirden, who learned all his Russian from Kovalchuk (and helped teach his friend English), has already experimented with a line of Ovechkin, Kuznetsov and Kovalchuk at times, and the trio combined to produce a goal in a win at Minnesota.

“He may be old for hockey player, but inside it doesn't seem like he's much older than us,” said Kuznetsov, who is nine years younger than Kovalchuk. “We feel like we're same age and that's always easy to find a way and it's always translate on the ice. If you can find out how to communicate with a guy off the ice, then it will be much easier on the ice."

Kovalchuk is trying to blend in and stay out of the way. He has connected with Dillon in large part because his Russian friends already have established lives in the D.C. area. Kovalchuk doesn’t want to interfere with that and is biding time until his family, still living in California, visits over spring break.

Playing mostly on the third line with Carl Hagelin and Lars Eller, Kovalchuk is making a bigger impact that he perhaps realizes.The Caps' 23-year-old rookie goaltender, Samsonov, needs to only observe Kovalchuk to learn more about how he conducts himself.

“It's important for me because I see how he get practice or warmup, how he’s ready in the game,” Samsonov said. “He's very good for our team.”

Only 22 active players have played more regular-season games than Kovalchuk without winning the Cup, and that’s a hunger Reirden sees in his former teammate. That experience is something Capitals players remember before winning it all two years ago.

“He's experienced, so it make us better, make us deeper and stronger,” Orlov said. “It's only gonna help us.”