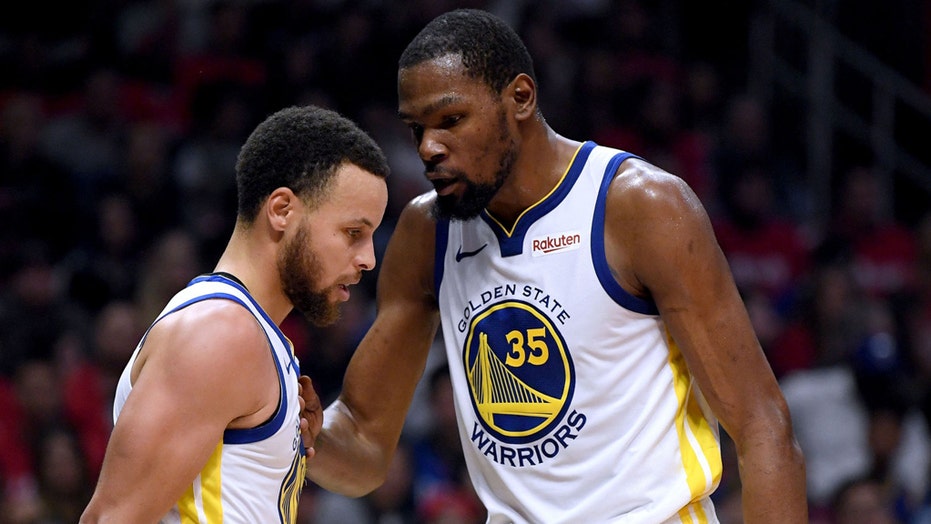 Kevin Durant is known to have a rocky relationship with the media, but Golden State Warriors beat reporter Ethan Strauss recently revealed in his new book that the two-time NBA champion’s bitterness had turned into jealousy toward former teammate Steph Curry.

From creating burner accounts on Twitter to directly responding to his critics, Durant has never shied away from voicing his opinion. Strauss experienced this firsthand during the 2018-2019 season, when Durant took aim at him over an article he wrote, CBS Sports reported, citing an except from Strauss' book.

KEVIN DURANT EXPLAINS WHY HE RESPONDS TO EVERYONE, INCLUDING TROLLS, ON SOCIAL MEDIA

"I tried to make a few points, saying I didn't begrudge him for having leverage with his contract, and insisted that I had good reason to write what I wrote. KD wasn't impressed and accused me of trying to ‘rile up Steph's fans,’” Strauss wrote in his book "The Victory Machine: The Making and Unmaking of the Warriors Dynasty.”

He continued: “He expressed that this was a constant theme in the Bay. All of us local guys just wanted to kiss Steph's a– at his expense. This was KD's consistent lament.”

Despite his own reservations with the media and fanbase, Durrant appeared to be well-liked in the Bay Area after three successful seasons with the Warriors in which he helped the franchise win back-to-back championships.

After the championship runs, Durant hit free agency and left the team after the 2018-19 season.

Durant signed a four-year, $164 million contract with the Brooklyn Nets prior to the 2019-20 season but has yet to play due to an Achilles injury.

Swath of snow to bring wintry blast from Rockies to Northeast

Michael Jordan: 1997-98 title team knew it would be their ‘Last Dance’ together

Michael Jordan: 1997-98 title team knew it would be their 'Last Dance' together