Kent State University shooting: What happened on this day in history

Kent State University shooting: What happened on this day in historyclose

The 50th anniversary commemoration of the Kent State University shooting, which killed four students and injured nine others, was largely pared down on Monday due to coronavirus restrictions, but the events of that day are never forgotten.

On May 4, 1970, members of the Ohio National Guard opened fire on droves of college students who were protesting the U.S. bombing neutral Cambodia during the Vietnam War. 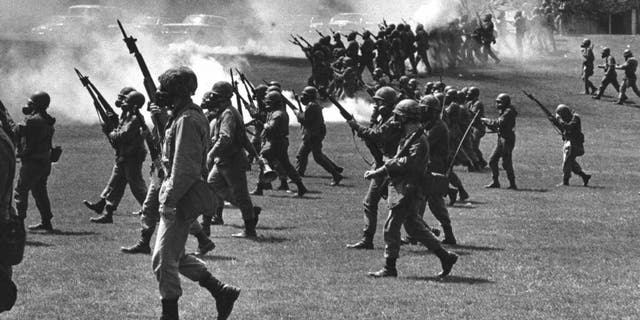 Nearly 1,000 protestors were surrounded by at least 30 guardsmen and hundreds were throwing rocks and chunks of concrete at them. At one point, the Army ROTC building on campus was destroyed by a fire that investigators believed was intentionally set.

Despite the deep divide in the nation about the war in Vietnam — which left 58,000 Americans dead — President Nixon condemned the attack on Kent State's campus.

“This should remind us all once again that when dissent turns to violence it invites tragedy. It is my hope that this tragic and unfortunate incident will strengthen the determination of all the nation’s campuses, administrators, faculty and students alike to stand firmly for the right which exists in this country of peaceful dissent and just as strongly against the resort to violence as a means of such expression," he said at the time.

Initially, guardsmen said they shot at the students after a police helicopter spotted a sniper in the crowd. This theory was later disproven by investigators.