We’ve all heard stories about soldiers saved from a bullet by the Bible they were carrying in their pocket.

In a Twitter post Wednesday, Lehner showed the crucifix mark left on his skin following Tuesday night’s game against – who else? — the New Jersey Devils.

“When you take a slap shot to the chest … worth it tho. god is good,” Lehner captioned the post.

The photo showed the golden crucifix that Lehner wears on a chain around his neck, and the red mark it left behind on his skin.

As of late Wednesday, the post had nearly 9,000 likes and had been retweeted more than 500 times.

“Jesus on your heart / as it should be,” one fan commented.

“That just means you are permanently blessed, big boy!” another wrote.

Lehner shut out the Devils 3-0 in Las Vegas. 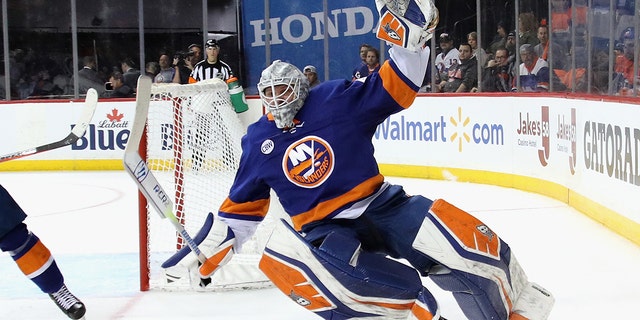 The 28-year-old netminder from Sweden joined Vegas in February after being traded by the Chicago Blackhawks.

He had spent last season with the New York Islanders, winning the Bill Masterton Trophy for sportsmanship and finishing as a finalist for the Vezina Trophy, the leagie’s top award fr goaltenders.

This Day in History: March 5

This Day in History: March 5