A Japan Airlines cabin attendant has tested positive for coronavirus, Reuters reported Monday.
Local media reports say one person in Kanagawa prefecture has died from the virus, raising the country’s death toll to 15.
UK-BASED FLYBE AIRLINE COLLAPSES, DECREASED DEMAND AMID CORONAVIRUS OUTBREAK SAID TO BE A FACTOR
Some airlines – including United – have cut back on flights both within the United States and internationally. The industry, already reeling from the grounding of Boeing’s 737 Max, stands to be severely damaged by the viral outbreak, especially if travelers stay away for months to come, the report said. 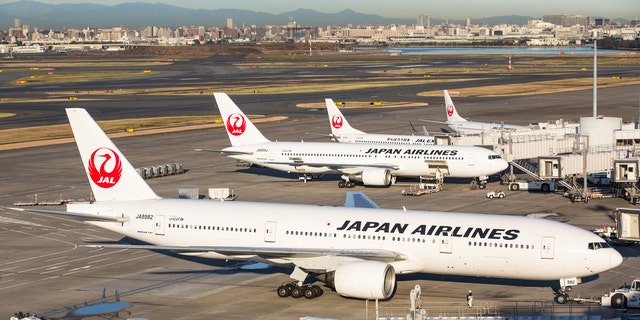 In Europe, Germany’s largest airline, Lufthansa, says it will cut up to 50 percent of its flights in the next few weeks after suffering a drastic drop in reservations. In addition, struggling British airline Flybe collapsed last week as the outbreak quashed ticket sales. Air France and Scandinavian Airlines are freezing hiring and offering unpaid leave and shorter work hours as they endure a drop in passengers and cargo.
CLICK HERE FOR COMPLETE CORONAVIRUS COVERAGE
The pullback in air travel has led to the cancellations of high-profile conferences, from the Geneva auto show to a global health conference in Orlando, Fla., to South by Southwest, the annual festival of music, film and technology in Austin, Texas. Those cancellations, in turn, are dealing financial setbacks to the cities that normally host them and count on the financial windfalls they bring.
The Associated Press contributed to this report.