Isaias forecast to become hurricane again, target Carolinas before spreading impacts all the way to Maine

Isaias forecast to become hurricane again, target Carolinas before spreading impacts all the way to Maineclose 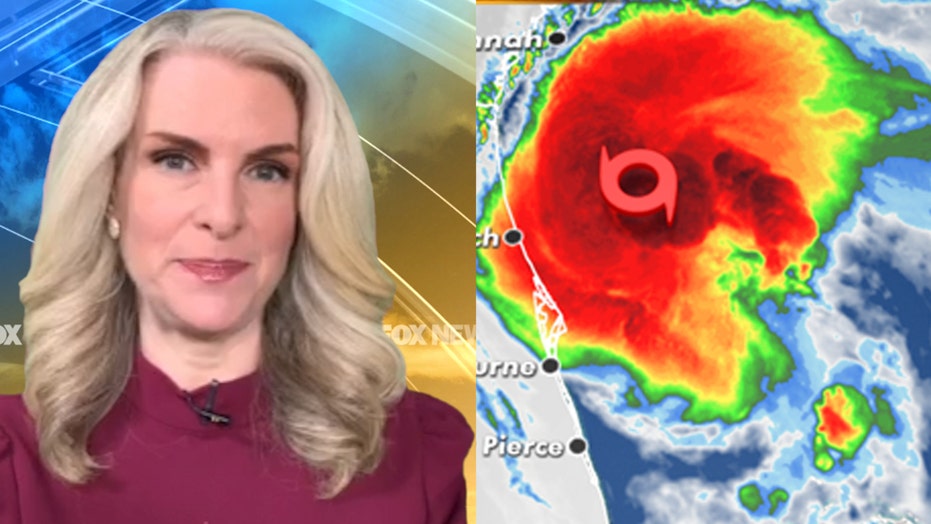 A re-energized Tropical Storm Isaias is now expected to make landfall in the Carolinas as a hurricane on Monday before spreading its impacts to over 50 million people along the Eastern Seaboard as far as Maine.

The U.S. National Hurricane Center (NHC) in Miami said the storm now has maximum sustained winds of 70 mph — just 4 mph shy of officially being a hurricane — and is located about 250 miles south-southwest of Myrtle Beach, S.C. Isaias is moving north at 13 mph.

"The bottom line is the track really hasn't changed but we could see a hurricane again with Isaias later on in the next 24 hours," Fox News Senior Meteorologist Janice Dean said on "Fox & Friends First."

The latest NHC forecast calls for Isaias to continue its recent strengthening into a hurricane once again before moving into South Carolina by Monday night and then moving quickly north along the Eastern Seaboard through Wednesday. 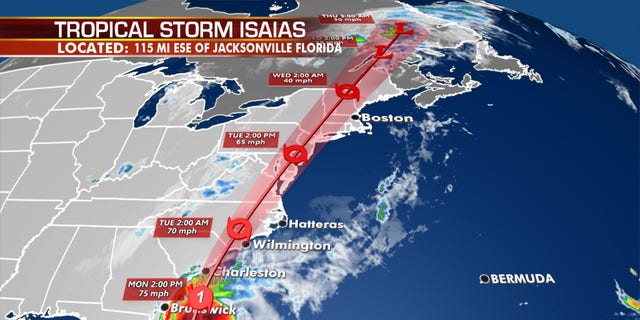 The forecast track of Isaias which is forecast to become a hurricane once again before making landfall. (Fox News)

"We think around Myrtle Beach later on this afternoon into this evening, and then moving on towards the Northeast," Dean said. 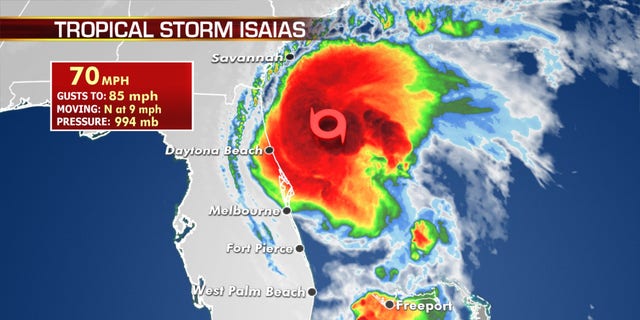 Isaias is forecast to become a hurricane once again before making landfall in the Carolinas. (Fox News)

Strong winds, storm surge, and flash flooding will be the primary risks with this tropical system from Florida up into New England as it moves north.

Widespread rain totals will reach between 3 and 6 inches with some isolated higher amounts. 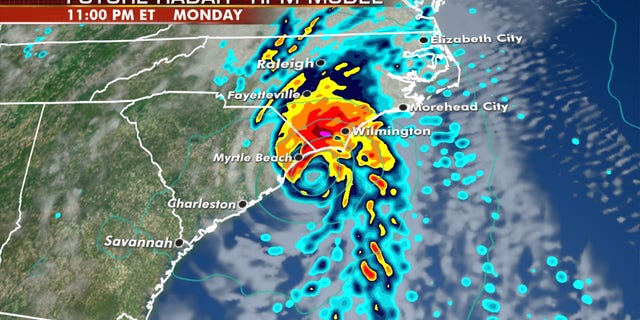 Isaias is forecast to become a hurricane once again before making landfall in the Carolinas. (Fox News)

Those heavy tropical downpours will bring the threat of flash flooding from the Carolinas through the Mid-Atlantic to the Northeast through Tuesday night, as a wide swath of rain with isolated rainfall up to 10 inches, especially across Mid-Atlantic, is expected. 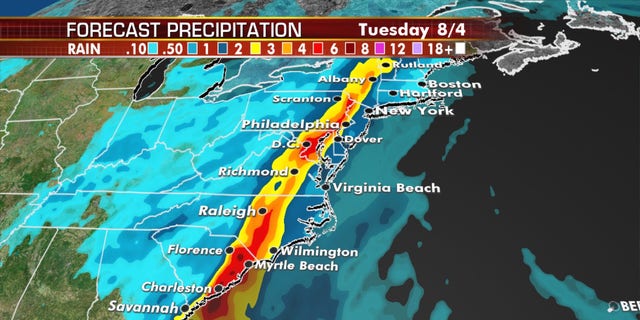 A few tornadoes will also be possible along the path of Isaias across the Carolinas on Monday into the evening hours.

As of 5 a.m. EDT, a hurricane warning has been issued from South Santee River, S.C. to Surf City, N.C. 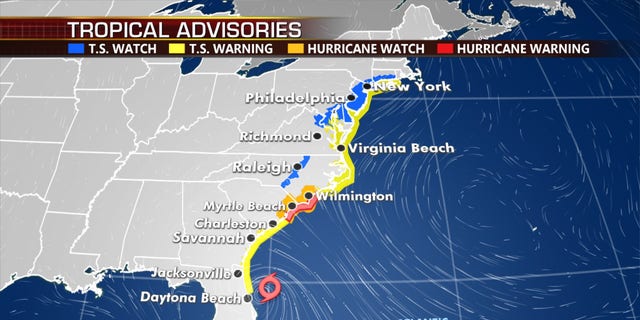 Over 56 million Americans are under a tropical storm warning, with another 55 million in the watch area.

The NHC is also warning that up to 5 feet of storm surge is possible from South Santee River, S.C., to Cape Fear, N.C., as well as in other coastal locations as far north as southern New Jersey.

"The deepest water will occur along the immediate coast in areas of onshore winds, where the surge will be accompanied by large waves," the NHC stated.

Before the tropical impacts arrive, showers and thunderstorms will get rolling on Monday over the Mid-Atlantic ahead of Isaias along a front draped along the Ohio Valley and Great Lakes. 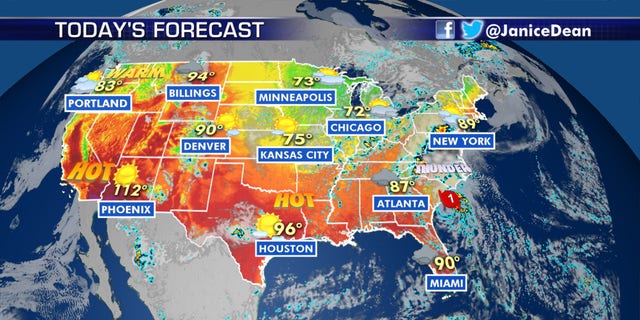 Over the weekend, Isaias brought heavy rain and flooding to Florida's east coast as officials kept a close eye on the storm.

The storm had weakened from a hurricane to a tropical storm on Saturday afternoon. 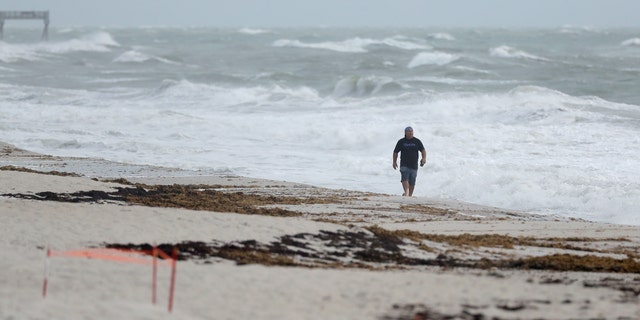 About 150 people went to shelters in Palm Beach County, where a voluntary evacuation was issued for those living in mobile or manufactured homes, or those who feel their home can't withstand winds. 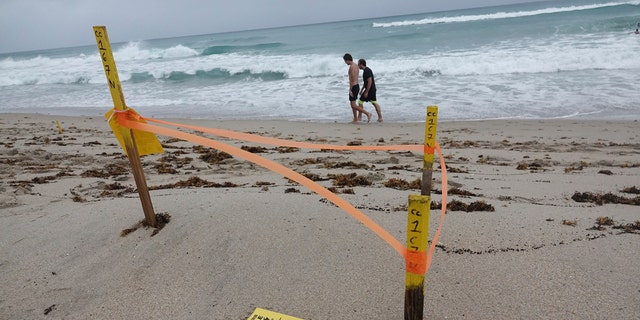 A turtle nest which was washed away in Delray Beach is seen, Sunday, Aug. 2, 2020, as Tropical Storm Isaias brushes past the East Coast of Florida. (Joe Cavaretta/South Florida Sun-Sentinel via AP)

In Indian River County, north of West Palm Beach, Fla., emergency shelters were clearing out Sunday after Isaias was downgraded to a tropical storm.

The storm did not affect the successful return of two astronauts aboard the SpaceX Dragon capsule, which splashed down into calm waters in the Gulf of Mexico off the coast of Pensacola. 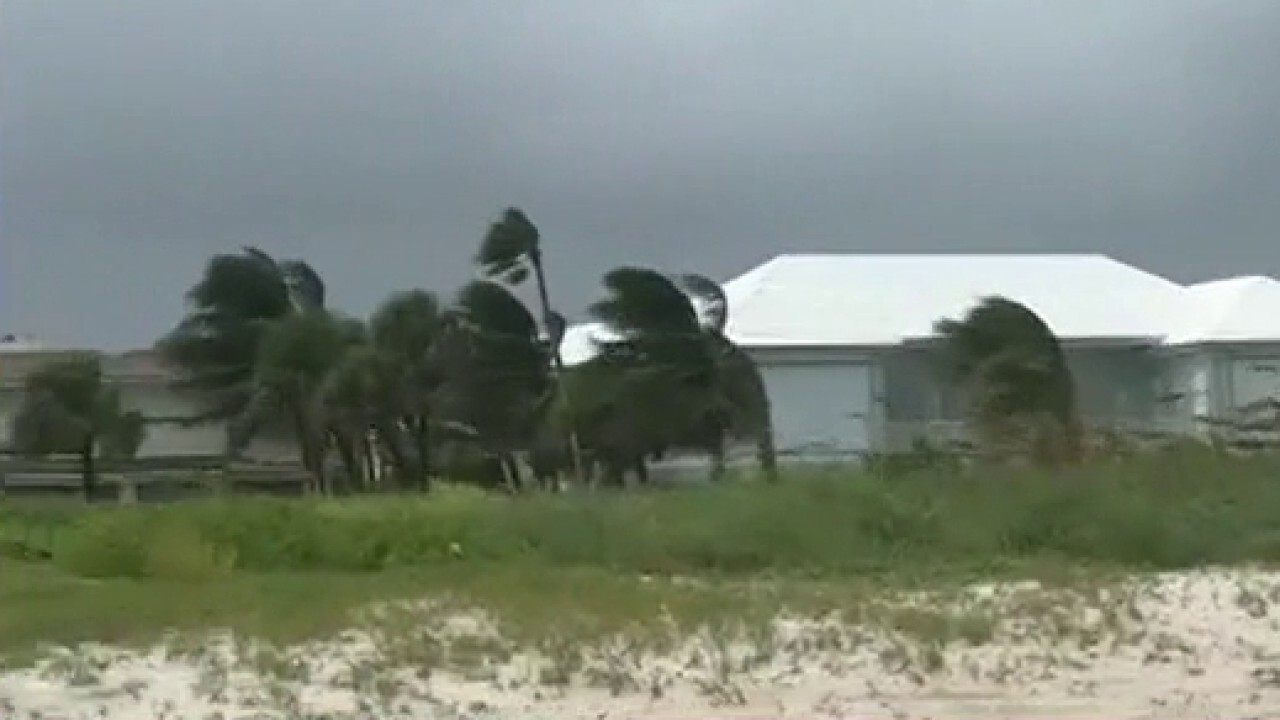 Test pilots Doug Hurley and Bob Behnken rode the capsule back to Earth less than a day after departing the International Space Station and two months after blasting off from Florida.

In the Caribbean, the storm caused destruction and widespread flooding. One man died in the Dominican Republic.

Fox News' Brandon Noriega and The Associated Press contributed to this report.