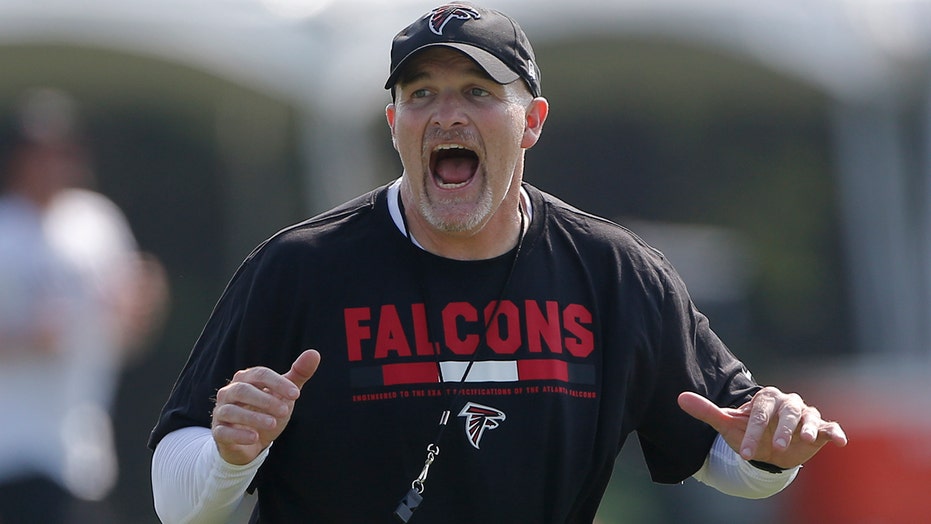 So what if the NFL is still on lockdown because of the coronavirus pandemic?

That just gives Quinn a chance to find new ways to reach his players and deal with various concerns.

“There’s a lot of things we don’t know and we can’t do,” Quinn said Tuesday during a video call with Atlanta-area media. “I’ve flipped it around to what we do know and we are able to do.”

This week, he's putting his rookies through a virtual camp while the veterans take a few days off. He’s also dealing with all the usual issues that are on a coach’s mind at roughly the midway point of the offseason, but take on even more importance for someone who, in all likelihood, must make the playoffs to keep his job.

For instance, the Falcons left a spot open on their 90-man roster because they want to sign an additional kicker before training camp.

Quinn is mindful of what happened a year ago, when the Falcons handed Giorgio Tavecchio the job with no other kicker in camp, only to have him flop badly during the preseason. That forced the team to bring back longtime kicker Matt Bryant, but he also struggled and was cut.

Younghoe Koo finally brought some stability to the position, going 23 of 26 on field goals, but the Falcons want to make sure he doesn’t become complacent.

“We are definitely considering adding a kicker into that spot,” Quinn said, though it’s not likely to happen until teams are allowed to open their training facilities. “You can imagine that some of those decisions involve workouts and things that aren’t available in this space. But we’ll keep that spot available and see what happens in the next couple of weeks.”

The coach also addressed the team’s decision not to pick up the fifth-year contract option on defensive end Takk McKinley, meaning the 2017 first-round pick can become an unrestricted free agent after the upcoming season.

Even though McKinley managed just 3.5 sacks last season and is recovering from offseason shoulder surgery, Quinn is still hopeful that McKinley can help address one of the team’s biggest problems last season: getting pressure on the quarterback.

After cutting ties with Vic Beasley, the Falcons also will give a long look to another first-round disappointment from the 2017 draft. Charles Harris was acquired by Atlanta a couple of weeks ago for the mere pittance of a seventh-round draft pick, having managed just 3.5 sacks in three years with the Miami Dolphins.

“We're still learning about him, things like what’s the best weight for him so he can really explode and be at his best," Quinn said. “He’s about a week behind the others, but he’s getting to know the guys and getting connected.”

Quinn was also pleased to get a full allotment of home games in 2020 after the league called off its international series. The Falcons has been scheduled to trade one of their games in Atlanta for a trip to London.

“We can do tea with the queen another time,” Quinn quipped.

As for working with his players mostly through video chats, Quinn said it's given him a chance to brush up on his teaching skills — especially when it comes to keeping everyone involved.

“I start off most meetings with questions we talked about the day before,” he said. “I'm usually pretty specific. These are not group questions. I will tell a player, ‘This one's for you.’"

If the players is having trouble with the answer, Quinn will turn to the format used on the game show “Who Wants To Be A Millionaire."

It's all part of the NFL's new reality, at least until an easing of restrictions.

“I love teaching,” Quinn said. “It's so much fun to find different ways to do it.”

Digital payments fraud concerns up in India amid COVID-19

Digital payments fraud concerns up in India amid COVID-19