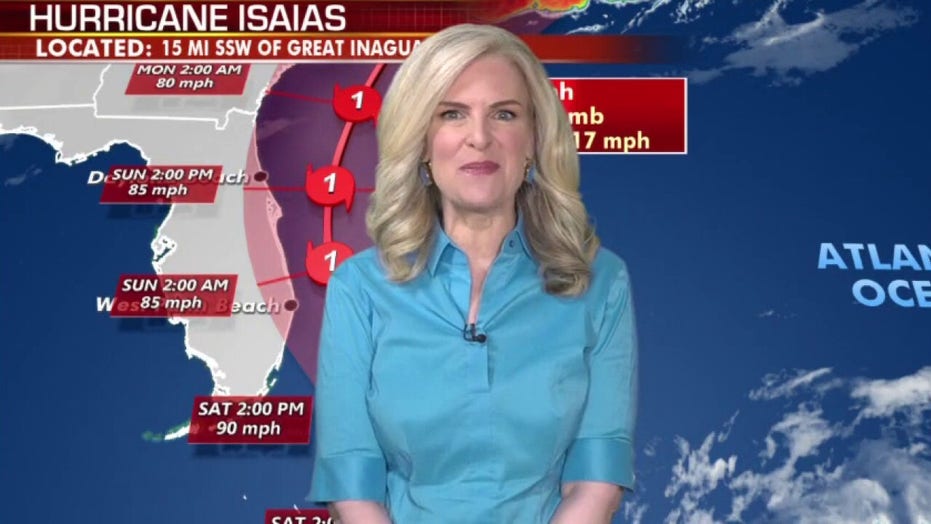 Some east coast states are bracing as Hurricane Isaias approaches the southeastern U.S., expecting it to impact the region this weekend and early next week.

Florida Gov. Ron DeSantis declared a state of emergency in all of Florida's eastern coastal counties on Friday. The declaration affects 19 of Florida’s 67 counties, and all beaches, marinas and parks have been closed in those areas. Twenty evacuation centers are on standby as well.

The storm, which forecasters say could reach the shores of Florida first, is expected to hit “as early as late tonight into tomorrow morning, with the potential to increase in strength to Category 2 [hurricane]," DeSantis said from a press conference Friday.

The storm is currently a Category One hurricane with winds up to 75 mphs, but it is expected to strengthen Friday evening or later into the weekend.

The governors of North Carolina and Virginia both declared a state of emergency as well.

"With the right protection and sheltering, we can keep people safe from he storm while at the same time trying to avoid making the pandemic worse," Cooper said Friday afternoon. "A hurricane during a pandemic is double trouble but the state has been preparing for this scenario so that we can do our best to keep people safe from the weather as well as the virus."

Virginia Gov. Ralph Northam said that the storm is expected to affect the coastal areas of the state as well, and he has activated the state of the emergency response as a precaution.

“Hurricane Isaias is a serious storm, and current predictions indicate that it may impact parts of Virginia as early as this weekend,” said Governor Northam in a press release. “This state of emergency will ensure localities and communities have the assistance they need to protect the safety of Virginians, particularly as we continue to deal with the COVID-19 crisis.

The Virginia Emergency Support Team (VEST) is monitoring the situation and preparing for extreme weather, but Virginians have been advised to make a plan if their area is in a coastal community, and to watch for weather alerts through the weekend.

A Better Year for Trump’s Family Business (Last Year, That Is)