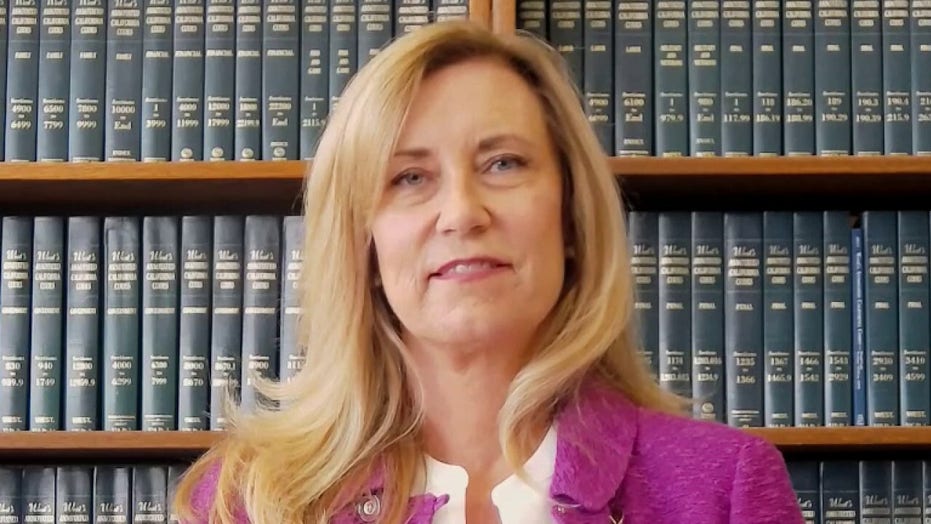 Lyn Semeta joins Martha MacCallum on 'The Story' to explain her decision to file a challenge against Gov. Gavin Newsom's order to close Orange County beaches.

California's Huntington Beach saw another wave of protesters on Saturday as discontent grew in response to the state's stay-at-home order during the coronavirus pandemic.

Huntington Beach Police Department said around 1,500 people were in the area, according to KABC. While it's unclear how many of those were protesters, footage from social media indicated the protests were expansive.

KABC reported that none of the protesters were arrested at the demonstration, which included many flags and signs.

The incident was just the latest of many to occur throughout the nation as Americans grew frustrated with the impact that restrictions had on everyday activities. Huntington Beach previously filed a lawsuit trying to get its beach reopened, but a judge refused to immediately block the order.

California Gov. Gavin Newsom’s administration gave approval Tuesday to plans by Huntington Beach and two smaller cities to reopen beaches that fell under his order shutting down the entire Orange County coast after a heatwave recently drew large crowds to the shore.

Newsom previously faced protests over his decision to shutter the beaches.

Holding signs with slogans such as “Open Cali Now,” “All Jobs are Essential” and “Surfing Not a Crime/Newsom is a Kook” as they took to the street, the protesters — many without face masks and not practicing social distancing — backed up traffic along the Pacific Coast Highway for at least a mile.

Police on horseback worked to push the crowd out of the road, FOX 11 of Los Angeles reported.

Many participating were with the group Fully Reopen CA Now, according to FOX 11.

"We cannot survive two, three months on this timeline with this amount of businesses shut down and, quite frankly, the data at this point doesn't support it," group member Vivienne Reiten told the station.

The city said it would allow active recreation including walking, bicycle riding and surfing, but not sunbathing. The city’s popular pier and beach playground remained closed, as well.

The Newport Beach City Council previously voted 5-2 against a measure that would temporarily close the beach, but Newsom’s latest order overrides that vote. A judge later refused a Huntington Beach request for an injunction against the beach closure.

Newsom said last week he sympathizes with the protesters but warned the “only thing that is assured to advance the spread of the virus is thousands of people congregating together, not practicing social distancing or physical distancing,” according to the Los Angeles Times.

On Friday, the state implemented its "Early Phase 2" reopening process, which allowed curbside pickup for a variety of retail stores.

“We are encouraged by the State’s announcement today that certain businesses will now be opening,” Huntington Beach Mayor Lyn Semeta said in a press release.

“With this transition, we’re now starting the process of working to safely bring our economy back online, which is a long-awaited move that all of us here in Huntington Beach have been eagerly awaiting. I would urge everyone to continue to practice safe social distancing as businesses start to reopen in the coming days. All of us are anxious to see a rapid return to our pre-COVID-19 lives.”

Fox News' Brie Stimson and The Associated Press contributed to this report.

The best Apple TV remote cases for less than $10 – CNET