How the coronavirus pandemic threatens US national securityclose

Coronavirus isolation: A look at how American game and toy companies are keeping us occupied during self-isolation.

The ever-escalating global spread of the coronavirus is taking lives, shattering economies, decimating healthcare systems and ratcheting up panic at unprecedented levels. But with such attention fixated on the ever-complex, ever-unknown public health impasse touching every corner of the world, what drastic implications does this have on the U.S. national security apparatus?

"At times like these, we are rightfully focused on fighting the pandemic. But an adversary could take advantage of our leadership shift of focus away from long-standing threats," Robert Lariff, a retired U.S. Air Force Major and fellow at the University of Notre Dame Institute for Advanced Study, told Fox News. "With a move to telework, networks and computer systems become especially vulnerable, creating exponentially more attack surfaces for hackers or cyber warriors. An adversary might use this as an opportunity to take actions – like the movement or addition of forces and equipment into contested areas – to test our detection systems and our resolve." 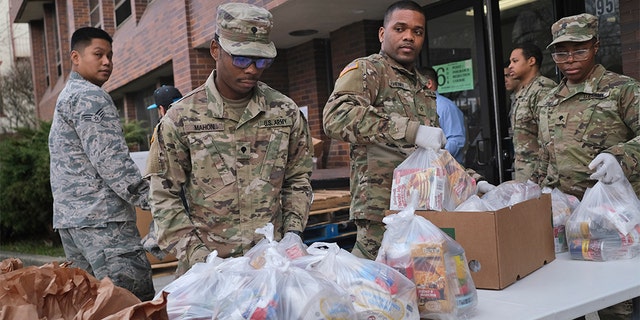 Members of the New York National Guard help to organize and distribute food to families on free or reduced school lunch programs in New Rochelle, N.Y., Thursday, March 12, 2020. State officials have set up a “containment area” in the New York City suburb, where schools and houses of worship are closed within a 1-mile radius of a point near a synagogue where an infected person with coronavirus had attended events. State officials stress it is not a lockdown. The vast majority of people recover from the new coronavirus. According to the World Health Organization, most people recover in about two to six weeks, depending on the severity of the illness. (AP Photo/Seth Wenig)

The underlying concern is that enemies could take advantage of the frenzied scenario to conduct physical and cyberattacks that would erode public confidence, further bankrupt security and health systems, and deepen the dire human and economic hardships with catastrophic consequences.

"A pandemic could easily lower the combat readiness of U.S. forces. We become so focused on fighting the effects of the virus that the attention of senior leadership is diverted from other continuing threats which didn't suddenly and magically disappear," Lariff continued. "The resources expended to fight the pandemic have to come from somewhere. People and dollars normally focused on other threats will be expended, placing stress on existing forces."

On top of the daily threat monitoring, U.S. intelligence agencies now also carry the extra burden of aiding in the piecing together of the virus's global and security impact, with particular importance on closed adversaries such as Iran and North Korea. A crucial aspect of the intel-gathering arena is to determine not only how impacted these nations are, but the health of their leadership and contingency plans should any regime's top echelons fall.

There is also the broader worry that nations could become failed states if their public health centers stretch and splinter, paving the way for nonstate actors to capitalize on the chaos with a deeper footprint in communities and government, and thus pose a direct threat to the U.S. and its allies.

And while little has hit the headlines in recent times, acts of terrorism and provocation are continuing to go on. Late last month, Iran orchestrated an attack – via its proxy militias in Iraq – on a U.S. base north of Baghdad, killing two Americans and one British soldier, igniting a U.S. retaliatory response. Iran has vowed to continue seeking revenge following the death of its top commander, General Qassim Soleimani, earlier this year. 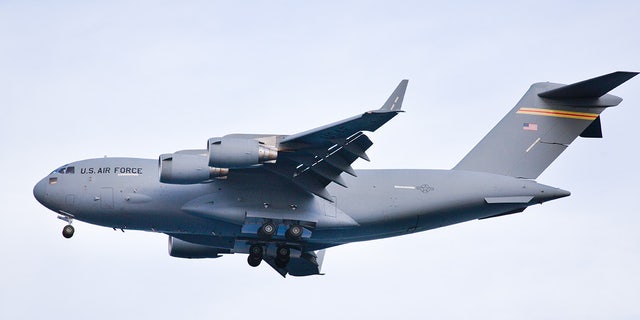 The Syrian government remains intent on recapturing the last rebel stronghold of Idlib as the blistered country's war moves into its 10th year, and Afghanistan is not only embroiled in daily attacks by the Taliban and a litany of other terrorist outfits. And North Korea, which is denying the existence of coronavirus on its soil altogether, has not abandoned its nuclear weapon ambitions.

Hal Brands, resident scholar and defense strategy expert at the American Enterprise Institute (AEI), concurred that "an adversary could take advantage of U.S..S. preoccupation with internal challenges to behave more aggressively," and the outcomes are manifold.

"Another possibility might be increasing Chinese coercion of Taiwan, or increasing activity in the South China Sea, at a time when China has largely emerged from the grip of coronavirus, but we and others are still in peak crisis mode," he said. "[A pandemic] consumes immense amounts of one precious resource – the time and attention of senior leaders. Conceivably, if we were to witness a breakdown of internal order in the United States, or the military was required to deliver food, man hospitals, deliver aid, or otherwise help deal with the pandemic, we might have less capacity to deal with overseas crises as they emerge.

And Samuel Brannen, senior fellow, International Security Program and director, risk and foresight group at the Center for Strategic and International Studies, additionally pointed out that "Russia, China, and Iran already are actively exploiting the situation through the spread of deliberately false information that is trying to blame the United States for the virus."

"This is false; the virus came from China and became a pandemic principally because of Chinese mismanagement of the initial response. It is possible that one or more of these countries is also behind a recent hack of the Department of Health and Human Services and the spread of misinformation suggesting a nationwide quarantine in the United States was underway likely to increase panic among U.S. citizens," he continued. "It is possible that if these states feel the United States is distracted or weakened in the coming weeks or months, they could also take other actions including seizing disputed territory of their neighbors or other aggressive actions." 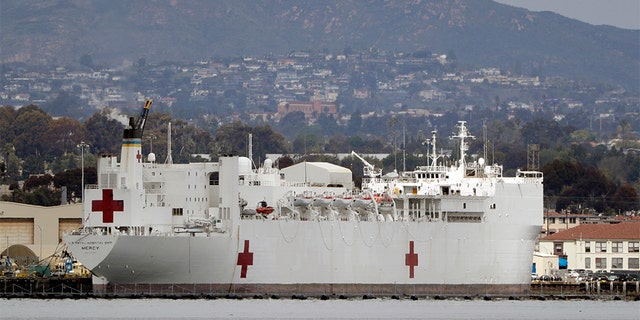 The USNS Mercy, a Navy hospital ship is seen docked at Naval Base San Diego Wednesday, March 18, 2020, in San Diego. Defense Secretary Mark Esper said Tuesday he has asked the Navy to prepare its two hospital ships — the USNS Mercy and the USNS Comfort in New York — for deployment to aid against the coronavirus outbreak. (AP Photo/Gregory Bull)

Nonetheless, the potential of a pandemic has always sat in the back pocket of the U.S. intelligence community. A threat assessment by the Office of the Director of the National Intelligence released early last year drew specific attention to such a health modality.

"We assess that the United States and the world will remain vulnerable to the next flu pandemic or large-scale outbreak of a contagious disease that could lead to massive rates of death and disability, severely affect the world economy, strain international resources, and increase calls on the United States for support," it said.

The report surmised that "the United States and the world will remain vulnerable to the next flu pandemic or large-scale outbreak of a contagious disease that could lead to massive rates of death and disability," underscoring that such an occurrence would "severely affect the world economy, strain international resources, and increase calls on the United States for support."

The report explicitly highlighted that a growing area of concern was the animal to human transmission of deadly pathogens, which is how the coronavirus is believed to have emerged out of the sprawling China city of Wuhan.

"The intelligence community has issued public warning after public warning about the threat of a pandemic reaching our shore," noted Ned Price, the director of policy and communications at National Security Action. "What's more, China has always been a high-priority intelligence target, and it is a safe assumption that U.S. intelligence had its sights trained on the emergence of this novel strain from its very first days."

On Wednesday, Immigration and Customs Enforcement (ICE) announced that it was halting the vast majority of arrests amid the coronavirus eruption. Bring Our Troops Home, a national group helmed by Iraq and Afghanistan war veterans, are also joining the push for President Trump to downsize foreign deployments and bring home all National Guard troops to assist state and local governments in responding to the ever-spiraling pandemic.

Matthew Schmidt, national security and political science professor at the University of New Haven, stressed that the changes to come in terms of how the U.S. approaches national security would be both vast and dizzying.

"A pandemic will likely make the government face the question of invoking Posse Comitatus, which would allow the military to operate domestically. Remember, a core component of the Constitution and the Revolution was to build a system where the government could not easily use the military internally," he said. "In this case, the military could be used to build field hospitals if the civilian healthcare system gets overloaded, to enforce quarantines, etc. I can't see this not impacting deployments in some way. If nothing else, troops will get sick too, and barracks, like cruise ships, are the perfect place to spread germs." 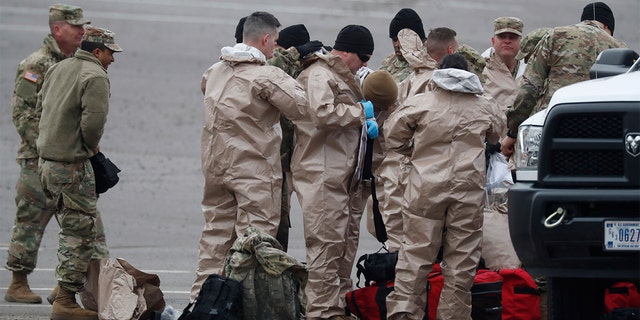 Colorado National Guard medical personnel suit up to perform coronavirus tests on motorists at a drive-through testing site outside the Denver Coliseum Saturday, March 14, 2020, in Denver. Officials planned to administer 150 tests but the line of vehicles wrapped around three city blocks. For most people, the new coronavirus causes only mild or moderate symptoms. For some it can cause more severe illness.(AP Photo/David Zalubowski)

Indeed, some Pentagon officials in recent weeks have sounded the alarm that the virus posed a significant "threat" to U.S. troops and associated defense contractors stationed in vulnerable areas abroad, heightened by close-living quarters and border shutdowns quickly ensnaring most parts of the globe.

The FBI also announced this week that the necessary social distancing heralded by the coronavirus crisis means that it has had to shutter its electronic public records operations, informing any member of the public seeking transparency and information related to terrorist or security concerns, that they can longer file requests online.

And in the case of any unforeseen strike on American soil, FEMA – which itself looks to be depleting its disaster relief fund and will require Congressional approval for more money – would be gravely hamstrung in its quest to help.

As of Thursday afternoon, the United States had more than 10,000 confirmed cases of coronavirus, officially termed COVID-19, up more than 500 percent over the past week as testing ramps up around the country. The number of cases globally has exceeded 230,000 – with six nations documenting a surplus of 10,000 infections.

"Finally, there is the danger that extreme social distancing measures could interfere with the basic continuity of operations of organizations like the Department of Defense or the intelligence community," Brands added. "Where remote work is often not possible."

Coronavirus concerns rise over past month — but 3 in 10 still not worried, poll finds

Look: Reader’s photo story: A tale of Common Hoopoe, a colourful bird with a distinctive “crown” of feathers

Look: Reader's photo story: A tale of Common Hoopoe, a colourful bird with a distinctive "crown" of feathers