How Blacks and Jews are bound together in ‘great replacement’ theory

(RNS) — The man authorities say opened fire in a Buffalo grocery store Saturday (May 14), killing 10 mostly Black shoppers, was an avowed white supremacist. But his agenda went far beyond Blacks.

In the 180-page manifesto posted online two days before he carried out his attack, the 18-year-old gunman wrote that he chose the Tops Friendly Market on Buffalo’s east side because it is in an area with many Black residents. Eleven of the 13 people shot there were Black, law enforcement officials said.

Blacks, wrote Payton Gendron, come from a culture that sought to “ethnically replace my own people.”

But at the root of this xenophobic plan, known as replacement theory, are Jews to whom the alleged shooter devotes as much vitriol. Traditionally, Jews are depicted as stealth invaders who manipulate Western elites to disempower and replace white Americans.

Both Blacks and Jews are bound together in white supremacy, watchers of the movement say.

“You can’t separate the racism and antisemitism,” said Amy Spitalnick, executive director of Integrity First for America, the nonprofit that successfully sued organizers of the 2018 Unite the Right rally in Charlottesville, Virginia, where marchers chanted “The Jews will not replace us.”

“There needs to be some conspiracy responsible for everything terrible that these white supremacists think is happening to this country as a result of Black and brown people, immigrants and refugees,” said Spitalnick.

Dozens of pages in the Buffalo shooter’s manifesto are devoted first to Blacks and then to Jews, replete with photos, drawings, graphs and caricatures.

RELATED: From Charleston to Pittsburgh to Buffalo, their blood cries out

On Sunday and Monday, scores of American Jewish organizations loudly denounced the massacre, which the U.S. Justice Department is investigating as “a hate crime and an act of racially motivated violent extremism.”

The Anti-Defamation League, the National Urban League and others called on President Biden to convene a summit on hate and extremism and to develop a plan to combat hate crimes, white supremacy and violent extremism.

The “great replacement theory” that binds racism and antisemitism was once an obscure extremist idea relegated to white supremacist forums. But in recent years it has become mainstream, especially as Fox TV host Tucker Carlson has made the Democrats’ intent to dilute the white voting population a central theme of his show. Several congressional Republicans have echoed it or outright embraced the notion. 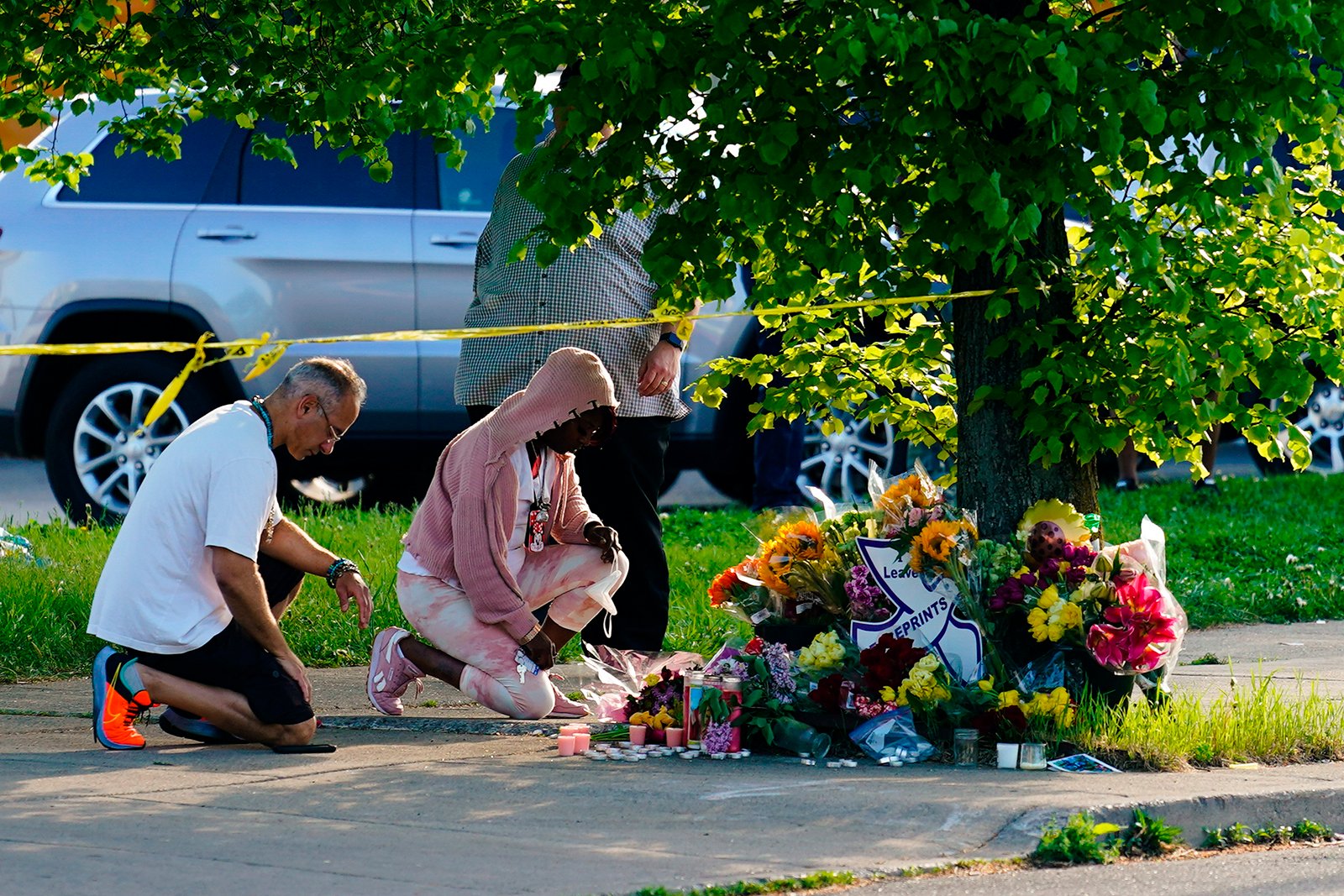 People pay their respects outside the scene of a shooting at a supermarket in Buffalo, N.Y., Sunday, May 15, 2022. (AP Photo/Matt Rourke)

At its root, the theory holds that not only is immigration to the United States crowding out whites, but that a cadre of elites, including Jews, are intentionally encouraging that to happen.

That charge is not new, said Samuel Perry, professor of sociology and religious studies at the University of Oklahoma and a leading expert on white Christian nationalism. It’s core to many authoritarian movements, stretching back to Nazi Germany.

The idea, said Perry, is that white people aren’t fertile enough and that it is “everybody’s responsibility to outbreed the negative elements we don’t want in our society,” he said. “It’s wrapped up in ethno-cultural outsiders: immigrants, Jews and Muslims. They are a threat to white hegemony,” Perry said.

The theory appeared to go dormant for some years but resurfaced in Norway in 2011 when Anders Behring Breivik killed 77 people. In 2019 in New Zealand, Brenton H. Tarrant killed 51 people in a pair of mosques while warning of “white genocide.”

About 20% of Gendron’s manifesto appears to be plagiarized from the declaration left by the New Zealand shooter, according to an analysis conducted by the Khalifa Ihler Institute, a Sweden-based think tank that seeks to combat extremism, The Washington Post reported.

In the U.S., white supremacy has a long history that has lately reemerged in mass-shooting sprees such as the 2015 massacre of nine people at a Black church in Charleston, South Carolina. Gendron praised Dylann Roof, the Charleston shooter, in his manifesto. Roof, like Breivik, he wrote, “fought for me and had the same goals I did.”

Three years later, Jews were the target when Robert Bowers gunned down 11 worshippers at Pittsburgh’s Tree of Life Synagogue, because he thought they were working to admit immigrant “invaders” into the United States.

For whatever reason, the Buffalo gunman sidestepped Jews this time, writing, “They can be dealt with in time.”

But he hardly spared them.

“The Jews are the biggest problem the Western world has ever had,” the manifesto reads. “They must be called out and killed, if they are lucky they will be exiled. We can not show any sympathy towards them again.” 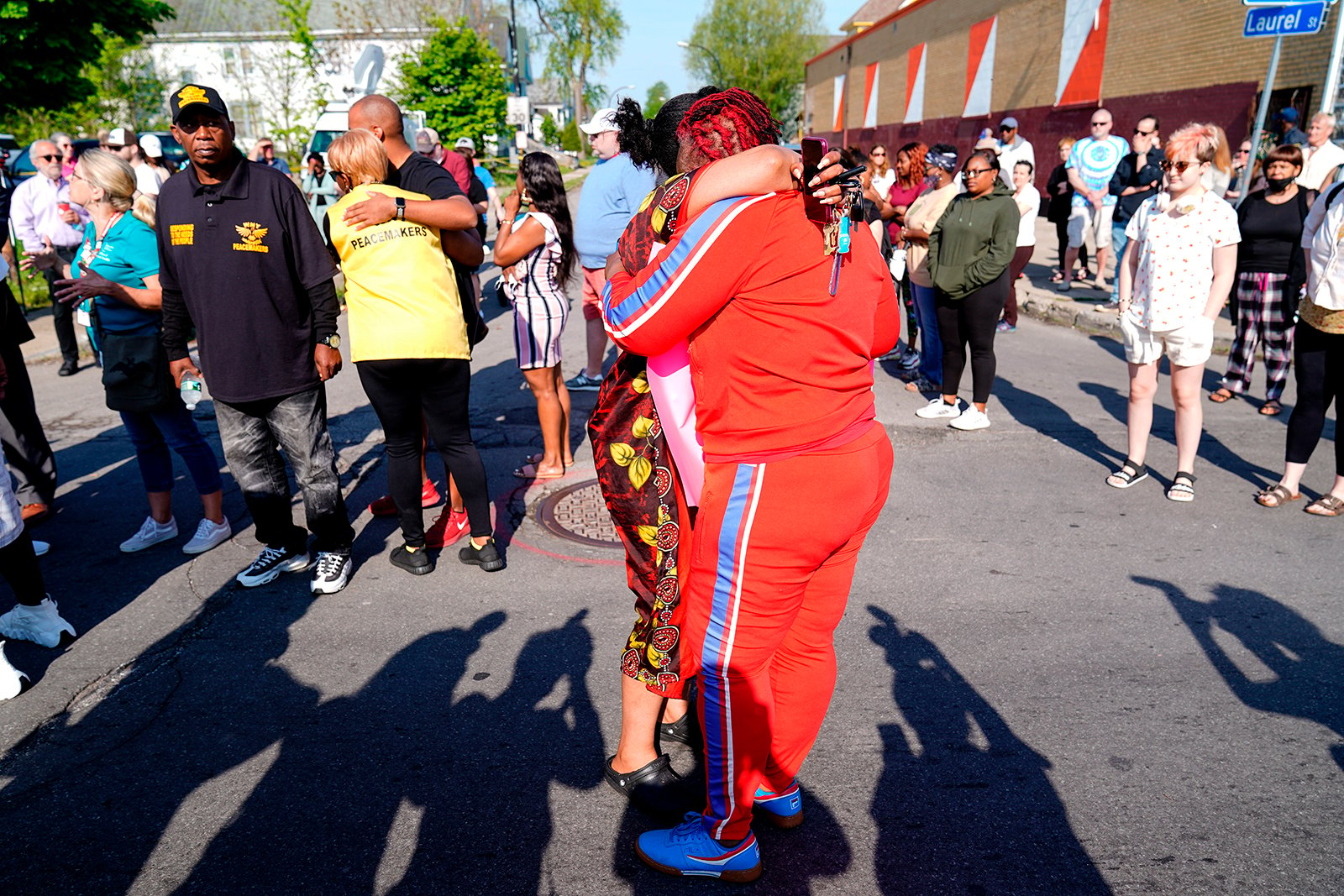 People embrace outside the scene of a shooting at a supermarket in Buffalo, New York, Sunday, May 15, 2022. (AP Photo/Matt Rourke)

White supremacists view American Jews as liberal, stereotypically tied up with institutions, such as government, media and academia, that are viewed as left-leaning and secular.

American Blacks, who are overwhelmingly Christian, are also on the wrong side of politics in the minds of xenophobes. Tending to vote Democratic, they are thought to support immigration — and to be a danger to white culture in themselves.

In the manifesto, Gendron writes about Blacks nearly the same way as about Jews. “We must remove blacks from our western civilizations,” his screed said.

Many Jewish groups issued statements of solidarity with Blacks Monday.

“Today, our multiracial Jewish community sits in grief, extending our love, solidarity, and support to the Black community in Buffalo and all who are in pain,” wrote Jamie Beran, interim CEO of Bend the Arc: Jewish Action. “Tomorrow, we rise in partnership to hold the politicians and corporations profiting from the spread of dangerous conspiracies accountable.”

Many are hoping the two groups can come together to fight the onslaught of hate.

“There needs to be clear recognition that you can’t take on antisemitism without taking on the various forms of hate bound up in white supremacy,” said Spitalnick. “All of our lives are intertwined.”

RELATED: The beloved community and the heresy of white replacement

DRC: Sister Claudia’s mission among the rejected in Kinshasa

Congolese community in Rome assures Pope Francis of Africa’s love for him.

Pope to Mediterranean Games: ‘Sport can create bridges between cultures’