Reps. Gil Cisneros, D-Calif., and Cedric Richmond, D-La., sent a letter signed by 28 congressional leaders to MLB Commissioner Rob Manfred and the Baseball Writers’ Association of America asking for the league and the journalists to reconsider the name on the prestigious awards.

“We recognize that Commissioner Landis’ namesake on the award is the result of his role in creating the system by which the Baseball Writers’ Association of America picks each league’s MVP recipient,” the letter read.

“However, given that Commissioner Landis perpetuated baseball’s ‘Gentlemen’s Agreement,’ to keep Black players out of the major leagues, we agree it is time to remove his name from the award, and move toward a more inclusive award designation.” 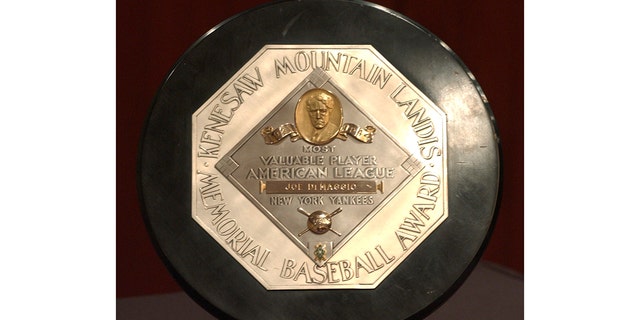 In this Jan. 22, 2006, file photo, a Joe DiMaggio 1947 MVP Award plaque is displayed at a news conference in New York. The plaque features the name and image of Kenesaw Mountain Landis. (AP Photo/Jennifer Szymaszek, File)

Every AL and NL MVP plaque since Landis’ death has carried his name — in letters twice as big as the winner — and an imprint of his face. Landis gave the BBWAA control of picking and presenting the MVPs in 1931. Landis’ name has been on the plaques for 75 years, but it is not pledged to remain there under the BBWAA constitution. A vote by the membership could lead to a redesign by the end of the coronavirus-delayed, 60-game season set to start in three weeks.

The change has already been endorsed by MVPs Mike Schmidt and Barry Larkin.

“I was always aware of his name and what that meant to slowing the color line in Major League Baseball, of the racial injustice and inequality that black players had to go through,” Larkin told The Associated Press.

No communication from Pakistan on Kulbhushan Jadhav case, we need unhindered and unimpeded consular access to him: India