Hofstra returns to NCAA Tournament for first time since 2001

Hofstra returns to NCAA Tournament for first time since 2001close 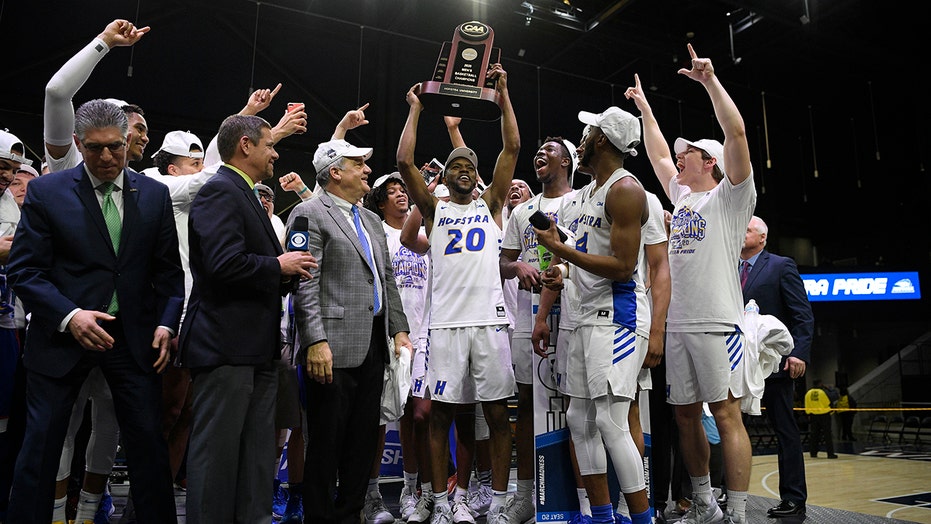 With March Madness approaching, get to know the history of the Colonial Athletic Association. Recent tournament champions include Northeastern and Charleston.

Eli Pemberton dreamed since he was 6 years old about playing in the NCAA Tournament.

He'll get to live that dream after helping end the Hofstra Pride's 18-year drought without an appearance.

Pemberton scored 12 of his 19 points in the second half and Hofstra came from behind to beat Northeastern 70-61 Tuesday night to win the Colonial Athletic Association Tournament and return to the NCAA Tournament for the first time since 2001.

"I knew that I always wanted to be there, and I’m glad that I’m going to be there with my brothers.” Pemberton said.

The top-seeded Pride (26-8) clinched the CAA's automatic bid and reached the NCAA Tournament for the fifth time in program history. It's Hofstra's first CAA title.

Coach Joe Mihalich's is back in the NCAA Tournament for the first time since 2007, when he was at Niagara. Players sprayed Mihalich with water on stage after receiving the CAA trophy.

“It is something to be proud of because we beat a bunch of champions," Mihalich said. "The championship goes through them. They are the defending champions, so to win the championship, you’ve got to knock out the champ.”

“My teammates were telling me to get the ball and make something happen,” Buie said. "That is what came from my coaches and teammates believing in me, and that is just what I did.”

Hofstra trailed at halftime and used a 17-4 run to pull away. The Pride held conference leading scorer Jordan Roland to just 11 points.

Hofstra was nearly unstoppable during tournament play and delivered an 18-point drubbing of Drexel in the quarterfinals. The Pride scored another double-digit victory against Delaware in the semifinals when they didn’t miss a shot for the game’s first five minutes.

Northeastern: The Huskies ran out of gas, and their Cinderella run at the CAA Tournament ended with a thud. Northeastern (17-16) upset third-seeded Towson and then beat Elon to reach the tournament championship game.

Hofstra: The Pride are expected to be a No. 13 or 14 seed in the NCAA Tournament and a big underdog in the first round. But the celebration is on in Hempstead, New York, because it has been so long since Hofstra made it.

“Growing up, that is always what I wanted to do, sitting at the TV and watching those games,” Buie said about advancing to the NCAA Tournament. “You dream of this as a kid. Kemba Walker was my role model, so I used to run home to see him and I just wanted to be a part of something special. I wouldn't trade these guys for the world.”

Hofstra: Looks to pull off a major upset and win its first NCAA Tournament game. The 2001 team lost to UCLA 61-48.