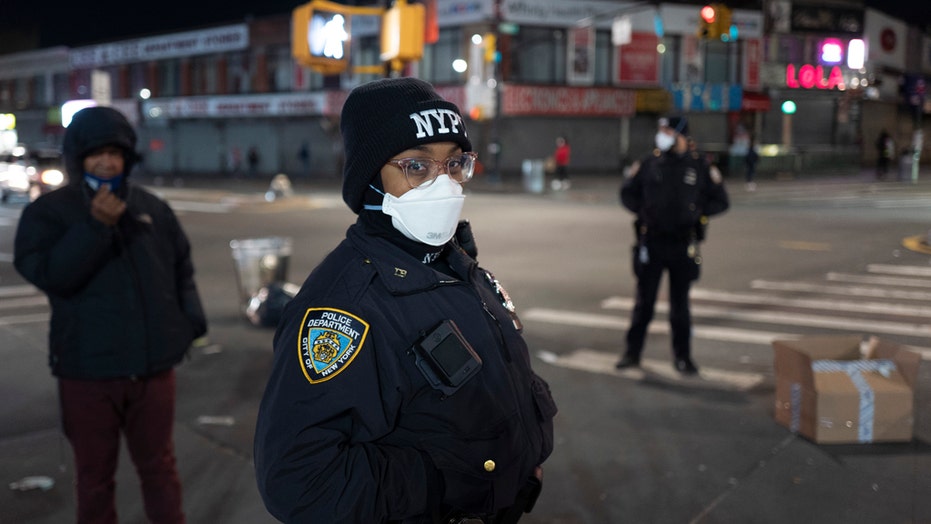 An increase in gun violence is fueling a rise in murders in some cities as coronavirus lockdowns drag on across America.

In Cincinnati, homicides have more than doubled amid the virus pandemic, from 12 at this time in 2019 to 28. “Of our 28 homicides, 25 of those are gun-related,” Police Chief Eliot Isaac told the City Council on Tuesday.

In Louisville, Ky., under a state coronavirus stay-at-home order since March 28, there have been 36 homicides as of Wednesday, up from 22 for the same period last year. 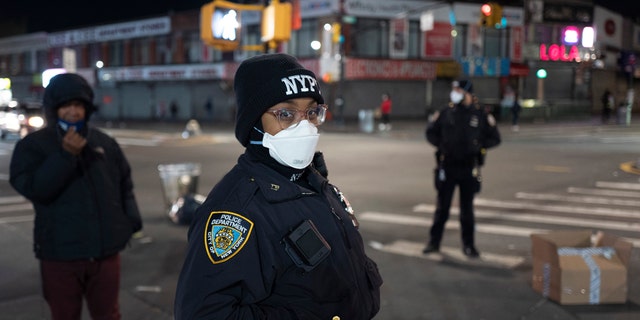 Police officers patrol a quiet street on foot April 22, during the coronavirus pandemic, in the Bronx borough of New York. As President Trump aims for a swift nationwide reopening, he faces a new challenge: convincing people it's safe to come out and resume their normal lives. (AP Photo/Mark Lennihan)

“What is clear to me, the people that are out there engaging in this violence don’t seem to care about the risks of the virus,” Louisville Metro Police Chief Steve Conrad told his city council, according to WFPL-TV. “This adds to the challenges for our officers and our detectives as they go about doing their jobs.”

On Thursday, The Trace, a gun-control news website, reported data showing that an increase in shootings was a glaring exception to a coronavirus crime drop in the U.S.

Crimes ranging from robberies to drug offenses have fallen in cites across the country, according to the news outlet, but gun deaths in the U.S. from March 1 to April 19 rose 6 percent over the same period in the past three years. The Trace based its report on data gathered by the nonprofit Gun Violence Archive, which tallied 2,094 firearm deaths over that seven-week period. 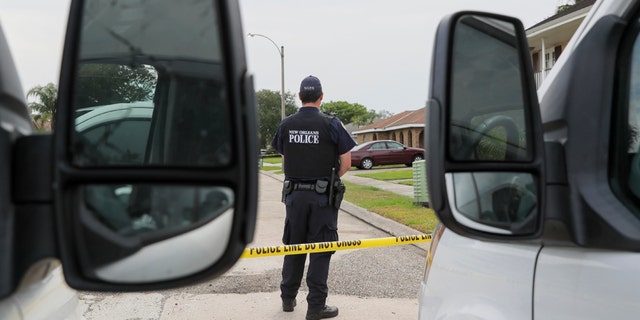 Citing data from various large city police departments, The Trace also reported that in four cities — Dallas, Nashville, Philadelphia and Tucson, Ariz. –shootings increased or stayed the same under stay-at-home orders, in comparison to the same period in previous years.

But, in five other cities — Baltimore, Chicago, Los Angeles, New Orleans and Washington, D.C. — gun violence decreased but remained elevated compared to other violent crime under stay-at-home orders, according to the news outlet.

“With more people hanging around and available to each other, I would expect shootings to stay the same or go up,” John Roman, a University of Chicago economist who studies crime patterns, told The Trace.

“People are not in school, not at work and not in training and other things that take them away from their neighborhoods.” 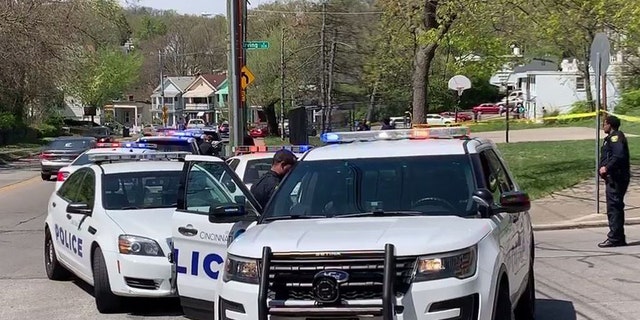 Cincinnati police Police at the scene of a recent homicide in the city's Avondale neighborhood. (Fox 19 Cincinnati)

Chicago is one of the most dangerous cities in the U.S., but on Friday, the Chicago Police Department released statistics showing that overall crime in the city in April in the midst of the city’s coronavirus stay-at-home order fell 30 percent compared to April 2019.

Police reported 56 murders in Chicago in April, five fewer than April 2019. They also reported 207 shootings as of April 13, a slight uptick from April 2019.

Another city where crime has been a problem, Jacksonville, Fla., saw a rash of shootings in April after Mayor Lenny Curry urged residents to stay home to contain the spread of the coronavirus

One of the shooting victims was a 5-year-old girl, Kearria Addison, who was shot in the head April 6 by a stray bullet fired during a beef over $180 at a convenience store, according to Fox 30 Jacksonville.

As of April 12, there have been 53 murders in Jacksonville, including Kearria's. For the same period last year, there were 47, according to reports. 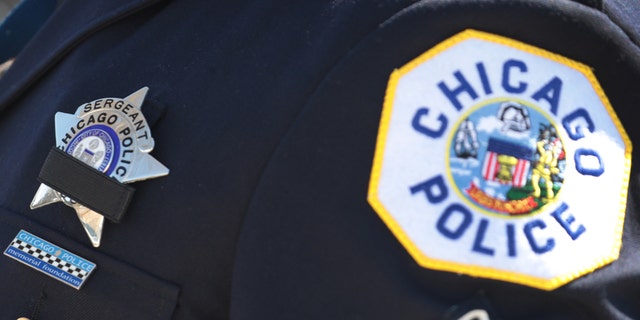 A police officer wears a button with a picture of Sgt. Clifford Martin, a 25-year veteran of the Chicago Police Department, while attending his funeral on April 21 in Chicago. Martin died on April 10, from complications from COVID-19. In accordance with the social distancing restrictions imposed by the state, only 10 family members were allowed inside the funeral home for the service and police officers joining in the procession were asked to remain in their cars outside of the funeral home during the service. (Photo by Scott Olson/Getty Images)

University of Maryland criminology professor James Lynch told the Florida Times-Union early in April that while social distancing measures might reduce in-the-moment violence, it was unlikely to prevent the types of targeted retaliation that police and prosecutors have said plague Jacksonville.

"The opportunity to commit crimes is restricted by the fact people aren't moving, but if you're out to get somebody particular, that's not going to stop you," Lynch told the paper.

“What is clear to me, the people that are out there engaging in this violence don’t seem to care about the risks of the virus.”

In New York City, where crime has declined to historic lows, the New York Police Department (NYPD) reported that overall crime fell in every borough and within the subway system between March 12 — when the city’s coronavirus order went into effect — and March 31. 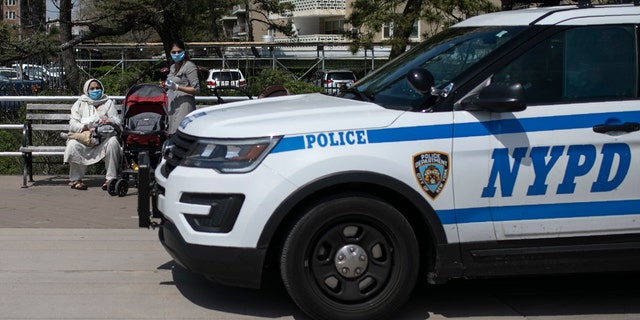 A New York City police car travels on the boardwalk along Brighton Beach with audio announcements blasting, reminding people to keep at least 6 feet apart in the Brooklyn borough of New York, on April 25. With the weather warming up, more people wearing personal protective equipment are seen venturing out to the parks and streets, though most still respecting the social distancing guidelines. (AP Photo/Wong Maye-E)

And New York City subway crime has spiked even as ridership has plummeted, leaving trains only to essential workers going to their jobs and the homeless.

“Some crimes are up in the subway even though ridership is down 90 percent,” Gov. Andrew Cuomo said at his coronavirus news briefing Wednesday. “I don’t even know how mathematically that is possible.”

Across the river from Manhattan in New Jersey, cops in Jersey City reported one murder this year from Jan. 1 to March 30. Since then, there have been five. New Jersey's lockdown began March 21.

CORONAVIRUS STAY-AT-HOME ORDERS: WHAT STATES HAVE ISSUED DIRECTIVES SO FAR?

On Sunday, pregnant chef Garima Kothari, 35, was found beaten to death in her Jersey City apartment, a victim of domestic violence, according to the New York Post.

Police said her husband, Man Mohan Mall, 37, murdered her before killing himself. His body was found floating in the Hudson River near a Jersey City train station.

The couple owned a trendy Indian eatery on the Jersey City waterfront that had been forced to close due to New Jersey’s virus stay-at-home order, the Post reported. Only within the past few weeks had Kothari and her husband reopened the restaurant for delivery and pickup.

Just before Kothari’s death, the Economist magazine reported tallying data from five big cities — Chicago, Kansas City, Los Angeles, Memphis and New Orleans — which all went into lockdown between March 19 and 24. The data showed a 5 percent increase in domestic violence reports even as total crime fell. 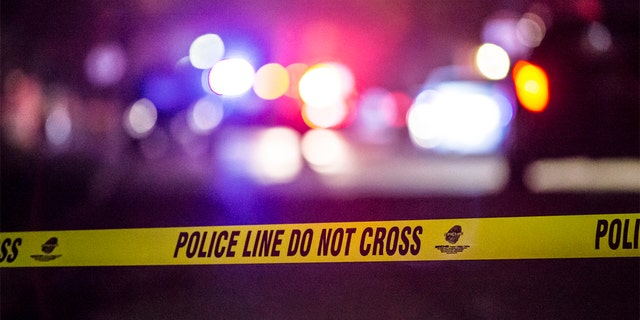 “While most violent crime is continuing to decrease during the pandemic, domestic violence calls for service are on the rise,” Jay Town, the U.S. attorney in Birmingham, Ala., said April 22. “People are more isolated. Abusive partners are under more stress. The options for escape are limited, if not cut off entirely.”

Milwaukee, Wisc., was the scene Monday of the worst domestic violence incident to occur since the coronavirus outbreak began.

Christopher Stokes, 43, a man with a history of domestic violence, was charged with shooting and killing five members of his family, including four teenagers, before calling police and saying: “I just massacred my whole family."

Wisconsin has been under a safer-at-home order since March 25.

"It feels like we're dealing with two pandemics at the same time," Reggie Moore, with the city of Milwaukee’s Office of Violence Prevention, told Fox 6 Milwaukee after the shooting. "We're seeing a lot of inner family conflict, which, with the 'Safer at Home' order, could be a contributing factor."

Coronavirus in Brazil leads to mass graves, fears country could become worst-hit in world: ‘We are in a state of utter disaster’

Coronavirus in Brazil leads to mass graves, fears country could become worst-hit in world: 'We are in a state of utter disaster'