Time names Greta Thunberg its 2019 Person of the Year

Teen activist Greta Thunberg said Saturday that climate change critics are getting “desperate” after a cartoon depicting her being sexually assaulted was printed on bumper stickers in Canada.

The image on the stickers, which circulated last week, depicts a naked woman from the back and a pair of hands pulling on her braids while engaged in an apparent sexual act. The name “Greta” is printed across the woman’s lower back.

The logo for X-Site Energy Services, a Canadian oil and gas services company, is printed on the bottom.

CLIMATE ACTIVIST GRETA THUNBERG GETTING HER OWN BBC DOCUMENTARY SERIES

“They are starting to get more and more desperate…,” tweeted the 17-year-old Thunberg. “This shows that we’re winning.”

X-Site General Manager Doug Sparrow told Canada's City News that he has received hundreds of complaints about the image, but claimed the company was not involved in making the sticker.

“It’s not from X-Site or any employee; someone has done this,” Sparrow said. “That’s all I know.”

Police in Red Deer, Alberta, the town where X-Site is based, opened an investigation into the sticker, which they initially called “distasteful.”

Investigators ultimately determined the sticker did not constitute a criminal offense since it did not meet the elements for child pornography or depict a non-consensual act that would be considered a direct threat to the person, police said in a news release. 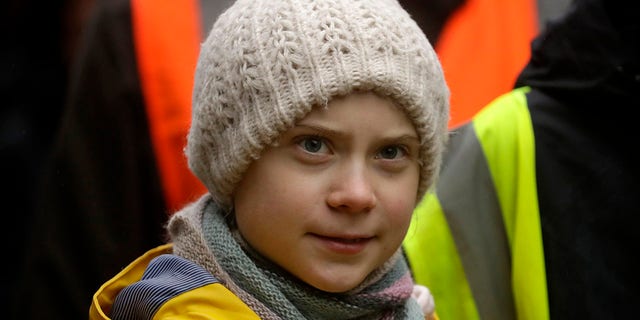 Thunberg, from Sweden, marches with other demonstrators as she participates in a school strike climate protest in Bristol, England, on Friday. (AP Photo/Matt Dunham)

Michelle Narang, an Alberta resident, called out the sticker on social media last week. She told HuffPost Canada that a friend in the oil industry sent her the image, which had been circulating at job sites.

The image has since been condemned by many on social media, including Leela Sharon Aheer, Alberta's minister of Culture, Multiculturalism and Status of Women.

“The graphic … is completely deplorable, unacceptable and degrading,” Aheer tweeted. “This is not what our province stands for. Whoever is responsible should be ashamed and apologize immediately. I stand with Albertans against this horrendous image.”

Thunberg, who has become a symbol for action against climate change, led a peaceful march on Friday through the southwestern British city of Bristol, where thousands of young people joined the Swedish activist.

In a speech, Thunberg said “nothing is being done to halt this crisis despite all the beautiful words and promises by our elected officials.”