Favourable conditions for monsoon over west UP, rest of Northwest India predicted

Favourable conditions for monsoon over west UP, rest of Northwest India predicted

New Delhi: With the formation of a cyclonic circulation/ low-pressure system over West Bengal and neighbourhood on 19th /20th June and its movement towards southwest Uttar Pradesh, conditions are becoming favourable for further advancement of monsoon over west UP and rest of Northwest India, according to India Meteorological Department.

It further said that a cyclonic circulation lies over East Uttar Pradesh and neighbourhood and extends up to 3.6 km above mean sea level.

Widespread rainfall with isolated heavy to very heavy falls very likely over Northeast, East, and adjoining Central India during the next 5 days. 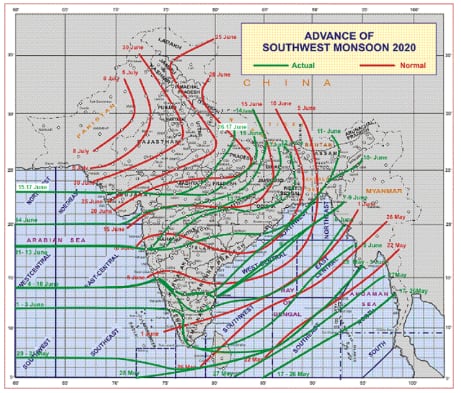 Meanwhile, India Meteorological Department (IMD) today said that the monsoon is likely to reach the national capital three to four days earlier than the usual date of June 27.

Kuldeep Srivastava, the head of the regional forecasting centre of the IMD, told PTI that a cyclonic circulation over West Bengal and the neighbourhood will move towards southwest Uttar Pradesh by June 19 and June 20.

"It will help in further advancement of the monsoon in west Uttar Pradesh, some parts of Uttarakhand, northeast Rajasthan and eastern Haryana between June 22 and June 24," he was quoted as saying.

The IMD has predicted normal rainfall (103 per cent) for northwest India this year.