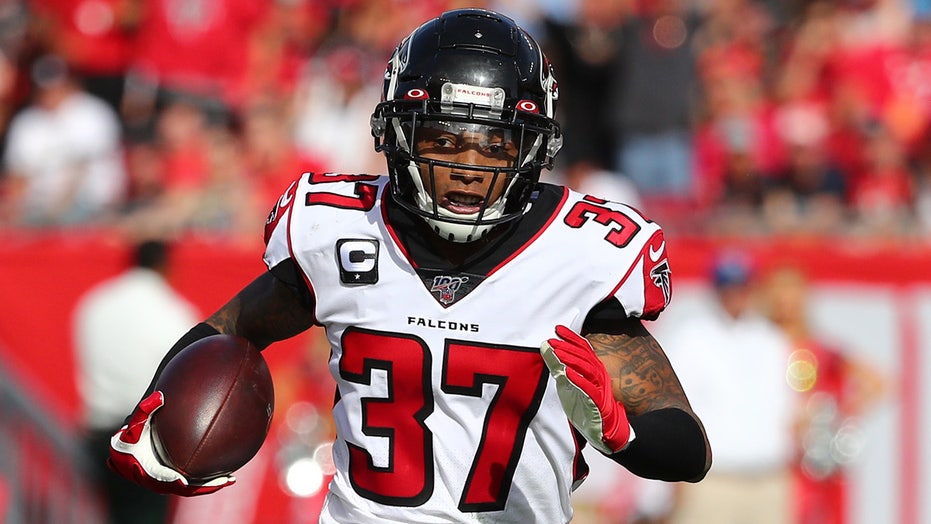 Ricardo Allen didn't budge when Georgia was one of the first states to open businesses during the coronavirus pandemic.

The Atlanta Falcons safety believes it is smart to stay home. He says he worries about the time when teams across the league open for practice.

RAVENS' EARL THOMAS GIFTED FLASHY NECKLACE BY WIFE AFTER SHE ALLEGEDLY HELD HIM AT GUNPOINT: REPORT

Restaurants, barber shops and other businesses were cleared by Gov. Brian Kemp in late April to open their doors. Allen believes the smart move is to stay home.

The NFL has set protocols for reopening team facilities and has made a 2020 season seem more real by releasing schedules this week. All of which makes Allen uneasy.

“This is nerve-racking,” he said this week. “This is different. This is something that us as players and us as human beings, we’ve never had to think about before.”

The NFL has not announced dates for when players can return to team facilities.

Allen sees daily reminders of lives lost to COVID-19 as he adheres to his quarantine. He knows the virus can kill anyone, even professional athletes.

BILL BELICHICK COMFORTABLE WITH PATRIOTS' QUARTERBACK SITUATION: 'WE FEEL LIKE WE HAVE FOUR GOOD PLAYERS'

“It’s tough to look at the news sometimes and see all the cases and all the trauma and the deaths that are going on in this world, and we know that we’re not like immune to it,” Allen said. “We know no one is immune to it.”

That's why Allen stays home. He says most of his teammates have taken the same safety-first stance “as much as possible.”

“Everybody is still trying to find ways to be creative and still work out, but really that’s all I’ve seen my teammates do," he said. "I haven’t seen many people leave the house other than to just go to a private workout.”

Falcons left tackle Jake Matthews' private workouts at his home near Houston have included time spent with his father, Pro Football Hall of Famer Bruce Matthews. Jake Matthews said last month his father puts him through "some old-school gasser conditioning run workout," and it's not easy.

Matthews relishes the extra time with his father but misses the team's traditional offseason program.

“When we were supposed to be showing up and reporting … it just felt weird,” Matthews said. “It felt like I was missing out, like everyone else was there and I wasn’t. It really is a weird situation and it does make you kind of reflect a little bit."

Those reflections have convinced him he's ready to play.

“Yeah, I’m dying to get back at this point,” Matthews said. "I’ve enjoyed the time off and kind of hanging out at home, but I’m ready for ball to start back up again.”

The Falcons and other NFL teams are attempting to remain on course for a 2020 season by having virtual offseason meetings. Allen sees his coaches and teammates by video conference.

He can't say when he'd feel safe to stand beside those teammates in a real huddle. He awaits guidance from NFL and government leaders.

“I’m anxious to see, to tell you the truth.”

Still, he's preparing himself physically and mentally for when the call comes to report.

“I’m just going to keep working and if we get delayed a little bit longer, I just keep going,” he said. “If it starts tomorrow, I feel like I’ll be ready.”