At least eight players on the UCLA football team tested positive for coronavirus, according to the director of Los Angeles County’s public health department. 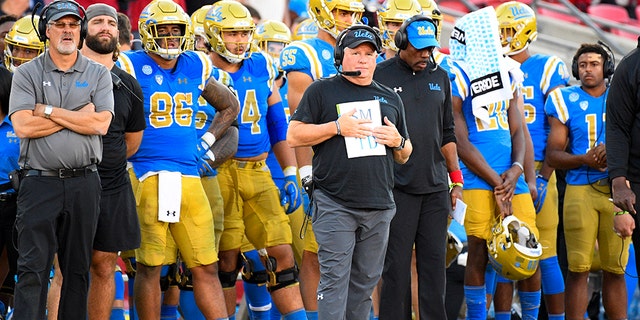 UCLA head coach Chip Kelly looks on during a college football game between the UCLA Bruins and the USC Trojans on November 23, 2019, at Los Angeles Memorial Coliseum in Los Angeles, CA. (Getty)

The NCAA Board of Governors reportedly said the future of the 2020 college football season must be decided by August 21. At least half the teams in each division must agree to have a regular schedule in the autumn for the season to move forward.

Athletes who choose to sit the season out had their scholarships guaranteed and have until August 14 to decide whether or not they will participate.

“Our decisions place emphasis where it belongs — on the health and safety of college athletes,” NCAA President Mark Emmert said, according to The LA Times.

This news comes two weeks after the NFL and its players agreed to cancel the league's preseason schedule this year.

The NFL Players Association, along with team owners, agreed to scrap the entire 2020 preseason and also opted to reduce the size of training camp rosters.

The league also said it expects to spend about $75 million on COVID-19 testing for players and other personnel this season.

White House and Congress Remain Far From Any Stimulus Deal

White House and Congress Remain Far From Any Stimulus Deal