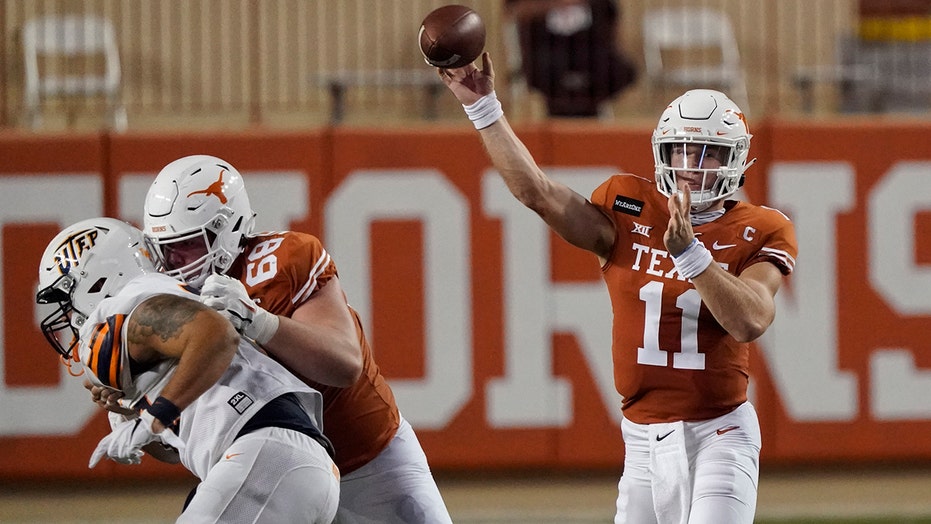 The stadium was mostly empty and the Texas players beat a quick path off the field when it was all over rather than lingering for the traditional singing of “The Eyes of Texas."

About the only thing normal for the No. 14 Longhorns Saturday night after months of coronavirus disruptions and social justice demands and protests was that they finally got to take the field against UTEP.

Even that was a little weird considering how many teams aren't playing this season and how some that are have already had games postponed.

But Texas made quick and easy work of the Miners (1-1) as Sam Ehlinger threw a career-high five touchdowns in the first half of a 59-3 romp that coach Tom Herman called “cathartic.”

Ehlinger threw a 78-yard touchdown to Joshua Moore on the first play. The second-leading passing in program history finished with 426 yards. He left the game midway through the third quarter with Colt McCoy's single-game records for yards (470) and touchdowns (six) easily within reach had he stayed on the field.

Moore's first touchdown since 2018 came on an inside route when he burst past one diving defender and outran two more with an easy path to the end zone. Ehlinger's final touchdown pass came on a 6-yard toss to walk-on Kai Money in the final seconds of the first half.

Texas' original schedule had the Longhorns visiting defending national champion LSU this weekend, in a rematch of their 2019 classic. But that game was scrapped as the Big 12 and Southeastern Conference retooled their schedules amid the coronavirus pandemic.

With social distancing rules and limits in place, Texas announced a crowd of 15,337 at a stadium that typically holds close to 100,000. The school required students using a special student season ticket package to pass a rapid COVID-19 test on Friday before they could go to the game. The school paid for the tests and reported 95 positives out of 1,198 administered. No other ticket holders were required to be tested.

“Obviously, it didn't feel normal, but I’m thankful to be out there with my teammates,” Texas junior safety Caden Sterns said. “It felt really good to get out there.”

While the crowd was small, it still gave a full-throated sing-along to the “The Eyes of Texas” before the game. The song had came under intense scrutiny over the summer amid social justice protests on campus and around the country.

Some Texas athletes, included Sterns, had demanded the school drop the song because of its history involving minstrel shows and actors in blackface decades ago. The school administration met other demands to rename some campus buildings and other measures, but refused to drop the song.

Once the game started, Texas was dominant. The Longhorns led 45-3 by halftime and rolled up nearly 700 yards of total offense. Texas didn't allow a sack in 47 pass attempts and the defense allowed only 233 total yards in new coordinator Chris Ash's debut.

The “Eyes of Texas” was played again after the game ended. Instead of gathering to sing it, most players immediately started streaming to the locker room tunnel without stopping. Texas players wore a “WeAreOne” patch on their jerseys.

“I don’t know that that was any kind of voice or demonstration," Herman said of the quick exit from the field. "We were just saying our good games and pleasantries to the opposition and it was over and now we’re heading to the locker room.”

UTEP: The Miners came in feeling pretty good after a season-opening victory that matched their win total of each of the previous two seasons. But they were overpowered at the line of scrimmage and overwhelmed by Texas' speed while Longhorns receivers zipped through and around the UTEP secondary.

Texas: Ehlinger is still the engine that will drive the offense under new coordinator Mike Yurcich, but he's got some new weapons, They include a quick-tempo attack that moves even faster than anything Texas has used in recent years. A touchdown pass to tight end Cade Brewer and second quarter TD throws to graduate transfers Brenden Schooler and Tarik Black show he's got a lot of targets to choose from despite losing his top two receivers from a year ago.

“I hope we can continue to spread the ball around to those guys,” Ehlinger said. “There’s too much talent not to.”

Texas has nowhere to go but up. Not everyone ahead of Texas played this weekend, but of the ranked teams that did play, the Longhorns were among the most impressive. They overwhelmed an inferior opponent and avoided any serious missteps.

Texas: The Longhorns take a week off before going on the road to Texas Tech to start the Big 12.