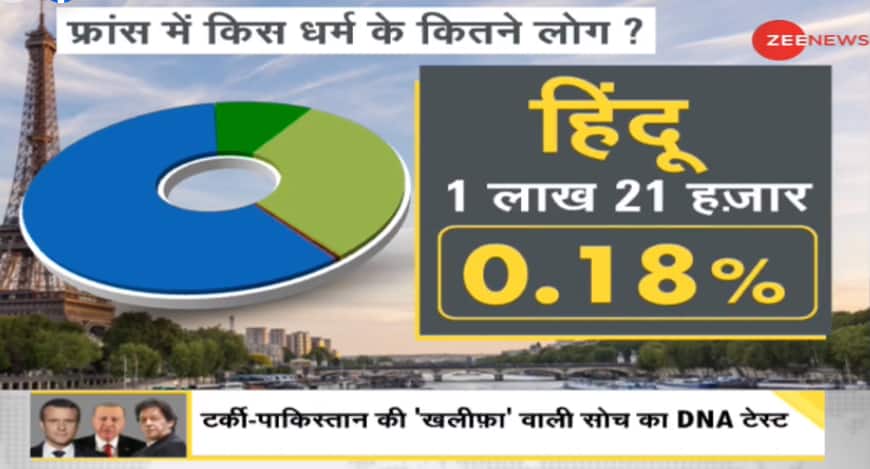 New Delhi: French President Emmanuel Macron, who has commenced a war against radical Islam, is being trolled globally and criticized in many countries of the world for waging a decisive battle against Islamic terrorism following the assassination of a school teacher, Samuel Paty.

The French President clearly stated that there is no longer a place for radical Islam in France. This has irked those countries that consider them to be the leader of the Islamic bloc and they have started opposing France. Today, Hashtags like Boycott French products and Boycott France trended on social media.

Turkey's President Recep Tayyip Erdogan also criticized the French President and even questioned the mental state of his French counterpart. This led to tension between the European Union and Turkey.

Several EU officials harshly criticized Erdogan's comments and the European Commission today said that the Turkish leader should change his approach if he does not want to derail the bloc's attempts at renewed dialogue with his country. European Council President Charles Michel blamed Turkey for resorting to "provocations, unilateral actions in the Mediterranean and now insults."

In an unusual move, France has also announced that it was recalling its ambassador for consultations, after noting that Turkey had called for a boycott of French products. The move, if taken, could add a layer of economic ramifications to the deepening diplomatic tussle.

Pakistan's Prime Minister Imran Khan is also speaking the same language of Turkey, accusing the French President of spreading Islamophobia. He further said that Emmanuel Macron has no understanding of Islam. It also summoned French Ambassador Marc Barety on Monday to lodge a "strong protest" against the publication of caricatures on the Prophet and comments made by French President Emmanuel Macron.

Pakistan reiterated that freedom of expression should not be misused as means to attack or hurt public sentiments or religious beliefs and fan inter-religious hatred, hostility and confrontation. Amid the political barbs, neither Erdogan nor Imran Khan has publicly condemned the killing of the French teacher. The general secretariat of the 57-nation Organization of Islamic Cooperation (OIC) was among several bodies and groups that have denounced the killing.

Although most countries in Europe are secular and leaders there are always proud of being secular. European leaders have been afraid of Islamophobia, as they feared if this word is added to their name then their political branding will get damaged.

Most of the European nations had opened their doors for Muslim refugees and now these refugees are talking about Sharia. France is suffering the most damage due to this radical Islam.

On the contrary, Macron has vowed that he will not give up, and the abuses hurled at him will not cow down his spirit. Tweeting on Sunday night, in English and Arabic, Macron said, "We will not give in, ever." The French Presdient, however, affirmed, "We respect all difference in a spirit of peace" Another presidential tweet said in bold print "We are ONE."

The opposition of France which started in Turkey and Pakistan has now reached other parts of the Islamic nations. Muslims in the Middle East and beyond on Monday broadened their calls for boycotts of French products and protests, as a clash over depictions of the Prophet and the limits of free speech intensified.

According to reports coming in, Kuwaiti stores pulled French yogurts and bottles of sparkling water from their shelves, Qatar University cancelled a French culture week, and calls to stay away from the Carrefour grocery store chain were trending on social media in Saudi Arabia and the United Arab Emirates.

Of the total French population of 6,63,53,270, the number of Muslims is more than 66,35,000. Of this, Christians have the highest number as 38 million people believe in Christianity, which comprises 57 percent of the total population.

This number is followed by the highest number of people, 2,08,34,000, who do not believe in any religion, and this number of comsists of 31 percent of the total population.