Darkness of lantern era over; single vote can save Bihar from becoming `bimar`: PM Narendra Modi

Darkness of lantern era over; single vote can save Bihar from becoming 'bimar': PM Narendra Modi 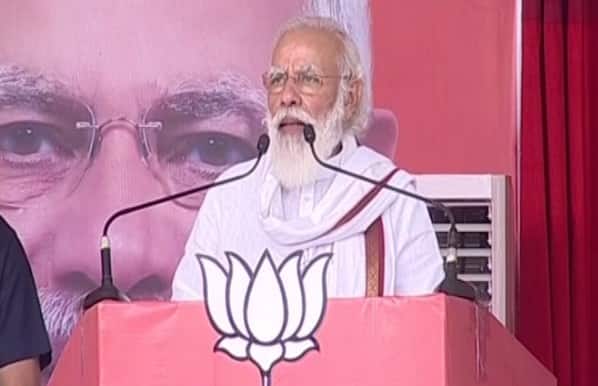 New Delhi: Prime Minister Narendra Modi on Wednesday (October 28) highlighted Bihar`s past to question Bihar`s future, and said the days of the lantern were over, taking a dig at the main opposition RJD, which ruled the state for 15 years.

In his Patna rally, which was his third on Wednesday, the Prime Minister said, "Who can fulfill the aspirations of the poor and the middle class of Bihar? Those who looted Bihar, can they do it? Those who single-handedly thought of their families and did injustice to everyone will never realise Bihar`s expectations. Only the NDA can do it."

Sharing the stage with Chief Minister Nitish Kumar, PM Modi said, "Atal ji (former Prime Minister) used to say that in Bihar in-bound supply of electricity is less while it vanishes more. The darkness of the lantern era is now over. Bihar`s aspirations now are of continued electricity supply, of LED bulbs."

He also said that just like the people of the state can save themselves from COVID-19 with a mask, similarly with a single vote they can save Bihar from becoming "bimar" (sick).

PM Modi said, "In the last decade and a half, Bihar has strongly stepped up the move from misrule to good governance under the leadership of Nitishji. Due to the efforts of the NDA government, Bihar has come a long way from inconvenience to convenience, from darkness to light, from distrust to trust, from kidnapping of industries to opportunities."

He further said, "Earlier it was rare to find a doctor in the hospital. Now facilities like medical colleges and AIIMS are in place here. Earlier, there was a demand in the villages that somehow the ravine should be spread but now people now desire wide roads that remain in good condition in every season."

The Prime Minister stated earlier general railway stations were also a dream for Bihar but now the stations are connecting with modern facilities, there is also an aspiration to start new rail routes, adding "Those who thought only of their family, did injustice to every single person of Bihar, also took away the rights of Dalits and Backward and deprived, will those people understand the hopes of Bihar?"

PM Modi said, "Earlier there was a demand for ring road in Patna. When the ring road was built, then the demand for the metro increased. Today when the work on Patna Metro is underway, the expectations of similar facilities have increased in other cities."

He also talked about unprecedented reforms being done from education to governance, from farmer to labour, from the ease of living to ease of doing business, adding "Today, after three and a half decades, India has received the new National Education Policy has been received."

PM Modi said, "There is every possibility of becoming an IT hub in Bihar. Here in Patna too, a big IT company has opened its office. New opportunities have opened for youth in Bihar. In past years, a dozen BPOs have opened in Patna, Muzaffarpur, and Gaya."

He said, "If there was no `Trishakti` of Jan Dhan, Aadhaar and mobile, then in the corona period, the ration rights of poor people of Bihar would have been usurped, like previous years," adding "Development is the way forward, setting new dimensions."

"Now crores of countrymen need fast internet in the village. The campaign to deliver optical fibre from village to village within 1,000 days has also started from Bihar. The goal is to complete this work in every village of Bihar in a few months," he added.

Addressing another rally in Muzzafarpur today, the Prime Minister said that those who are promising development of the state are the ones who have earned the bad name for closing down industries in Bihar.

Notably, polling for the second phase would take place on November 3 and for the third phase on November 7, while the counting of votes will be held on November 10.

J-K: Militants kill street vendor from Bihar in Srinagar, injure one from UP in Pulwama | India News