Chris Cuomo’s coronavirus-induced fever may have subsided but the CNN anchor was red hot on Monday.

The longtime cable host, 49, had a mini-existential crisis on his SiriusXM show, lashing out at his lucrative primetime gig and blasting President Trump as being “full of sh-t.”

“I don’t want to spend my time doing things that I don’t think are valuable enough to me personally,” Cuomo said. “I don’t value indulging the rationality, hyper-partisanship.”

Cuomo said his battle with COVID-19 has made him rethink his values and question his position as a public figure.

“I don’t like what I do professionally,” he said. “I don’t think it’s worth my time.” 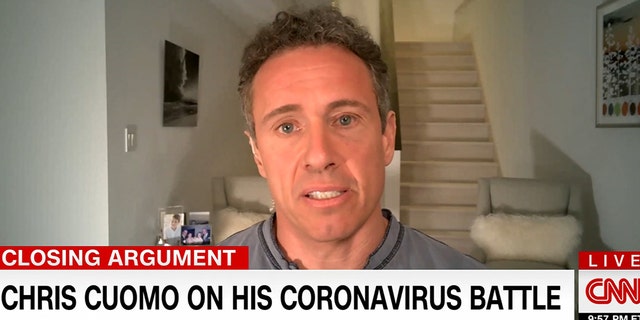 CNN's Chris Cuomo, speaking on his SirusXM radio show Monday, said his battle with COVID-19 has made him rethink his values and question his position as a public figure.

Cuomo then launched into a tale about a “loser biker” who confronted him on Easter Sunday for being outside his Southampton home with his family despite his coronavirus diagnosis.

CNN'S CHRIS CUOMO ADDRESSES COROANVIRUS DIAGNOSIS: 'THIS IS A FIGHT' BUT 'WE'RE GOING TO ALL GO THROUGH THIS TOGETHER'

“I don’t want some jackass, loser, fat tire biker being able to pull over and get in my space and talk bullsh– to me, I don’t want to hear it,” he said.

Cuomo said he wishes he could have acted like a regular Joe and told the biker to “go to hell.”

“That matters to me more than making millions of dollars a year… because I’ve saved my money and I don’t need it anymore,” he said.

“I want to be able to tell you to go to hell, to shut your mouth… I don’t get that doing what I do for a living.

“Me being able to tell you to shut your mouth or I will do you the way you guys do each other.”

Speaking about his job as the host of CNN’s “Cuomo Prime Time,” the Queens-born anchor said he doesn’t want to spend his time “trafficking in things that I think are ridiculous.”

Like “talking to Democrats about things that I don’t really believe they mean” and “talking to Republicans about them parroting things they feel they have to say.”

He also wants to stop analyzing the president, “Who we all know is full of sh-t by design.”

As a public figure, Cuomo said he has to tolerate other people’s opinions of himself — and it’s just not worth it to him anymore.

“I’m basically being perceived as successful in a system that I don’t value,” he continued. “I’m seen as being good at being on TV and advocating for different positions… but I don’t know if I value those things, certainly not as much as I value being able to live my life on my own terms.”

This Day in History: April 14

Officer Near Minneapolis Kills Motorist, and a Crowd Confronts the Police