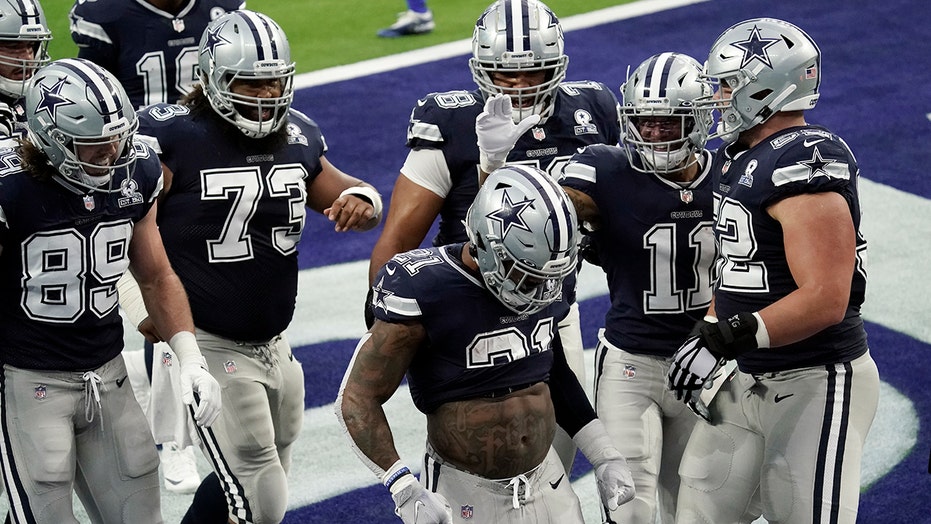 The NFL kicks off a new season on FOX

Dallas Cowboys star Ezekiel Elliott showed off the perfect tattoo Sunday night during his first game of the 2020 season against the Los Angeles Rams.

Elliott caught a 19-yard touchdown pass from Dak Prescott in the second quarter to tie the game. When Elliott returned from the end zone he showed off a “Feed Me” tattoo on his stomach.

CAM NEWTON GETS INTO KERFUFFLE WITH DOLPHINS PLAYERS AFTER PATRIOTS WIN, EXPLAINS OPPONENTS WERE REACHING FOR CHAIN

The running back is known for his “feed me” celebrations after touchdowns. Dallas was feeding him early and often. He would later score his second touchdown of the game right before the end of the second quarter on a 1-yard rush.

The Ohio State product is in his fifth season with the Cowboys and is looking for another Pro Bowl selection. In four years with the Cowboys, he’s earned three Pro Bowl and one All-Pro selections. He’s led the league in rushing twice in those four seasons.

Dallas narrowly missed making the playoffs and Elliott hopes to rectify that this season. The running back has been a part of two playoff teams – 2016 and 2018. He’s made three appearances in the postseason.