Abu Dhabi: Police have issued a cautionary message to residents using hand sanitisers and gloves in kitchens, as they are highly flammable materials.

People should avoid exposing hand sanitisers and gloves to open flames, especially in the kitchen.

In its advisory, Abu Dhabi Police said: “Families should not approach open flames in a kitchen immediately after using a hand sanitiser, as it is considered a flammable material, so be careful and adhere to the requirements of fire safety.” 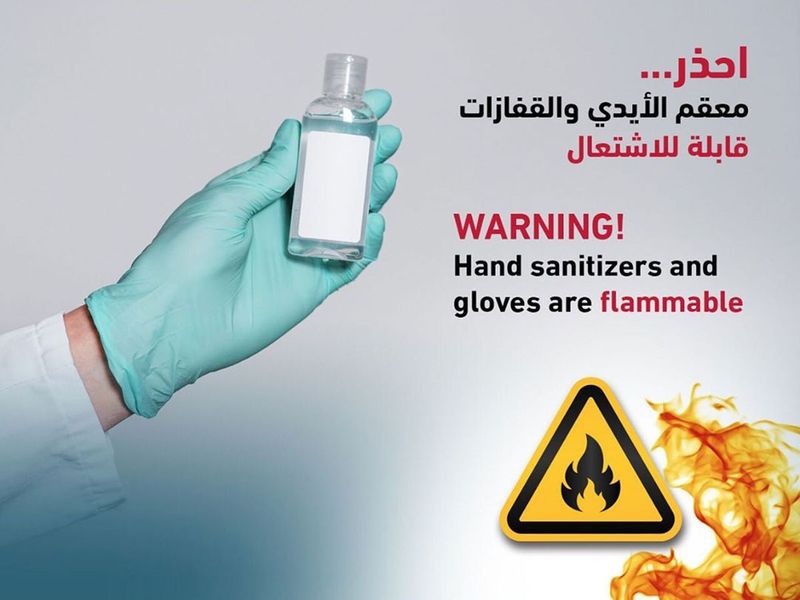 Families should not approach open flames in a kitchen after using a hand sanitiser as it is considered a flammable material, according to an advisory issued by Abu Dhabi Police. Image Credit: Supplied

Residents were also cautioned against exposing such types of highly flammable materials away from high levels of heat.

“Alcohol-based hand sanitisers are classified as a Class 1 flammable liquid, and children should not be allowed to have access to, or use hand sanitisers, unless supervised by an adult,” he said.

“These fire concerns are not the only safety issues associated with it. When used as directed, they are considered to be safe. But the improper use of hand sanitisers pose a risk to children and adults. For example, ingestion can result in poisoning,” said Capt. Al Midfai.

Alcohol-based hand sanitisers (ABHS) contain ethyl alcohol, which readily evaporates at room temperature into an ignitable vapor, and is considered a flammable liquid. Although the incidence of fires related to ABHS is very low, hand sanitisers should be stored safely and bulk dispensers should be installed and maintained correctly.

Before entering the kitchen, it is advised to wash hands with soap and water.

Pope at Mass: “I thank God for their heroic example”