Today, May 7, 2020, the first batch of Indian citizens are being repatriated from Dubai and Abu Dhabi, UAE. Thousands have applied to be allowed to fly back to the subcontinent from the Emirates. Every passenger goes through a rapid COVID-19 screening before being allowed to check in. 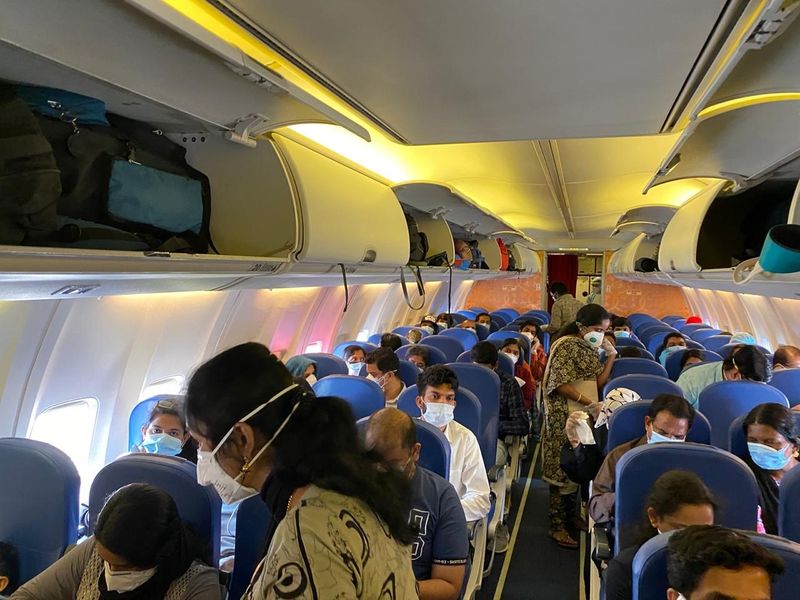 The first passengers on board Abu-Dhabi-Kochi flight shortly before take off Image Credit: Supplied

No suspected COVID-19 cases among passengers so far

There are no suspected COVID-19 cases among the first batch of passengers being repatriated today. So said Consul General of India in Dubai Vipul, who was at the airport to oversee the repatriation services, adding that 155 people checked in by 3.30pm. 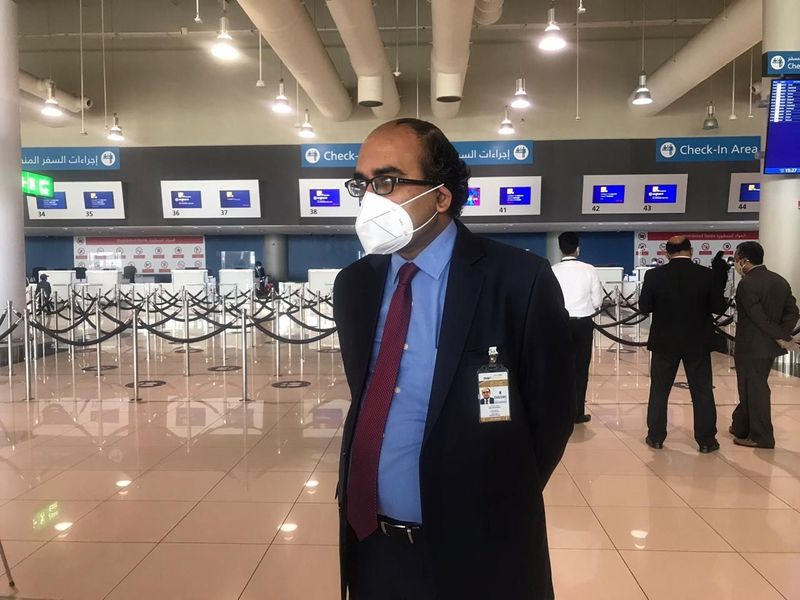 “All of them have cleared the tests,” he told Gulf News.

These included 18 pregnant women, five infants and 12 senior citizens and three people including identical twin brothers Jackson and Benson Andrews who have been stranded in Dubai Airport for 50 days.

Members of a medical team wearing personal protection equipment conduct COVID-19 "rapid test" for the first batch of passengers at Dubai International Airport being repatriated to India from the UAE on Thursday, May 7, 2020. Image Credit: Gulf News/Anjana Kumar

He said the criteria of selection included medical cases, loss of jobs, pregnant women and senior citizens. Those with complications and financial issues were also picked.

“I don’t buy the argument that ticket prices are expensive,” Vipul said. 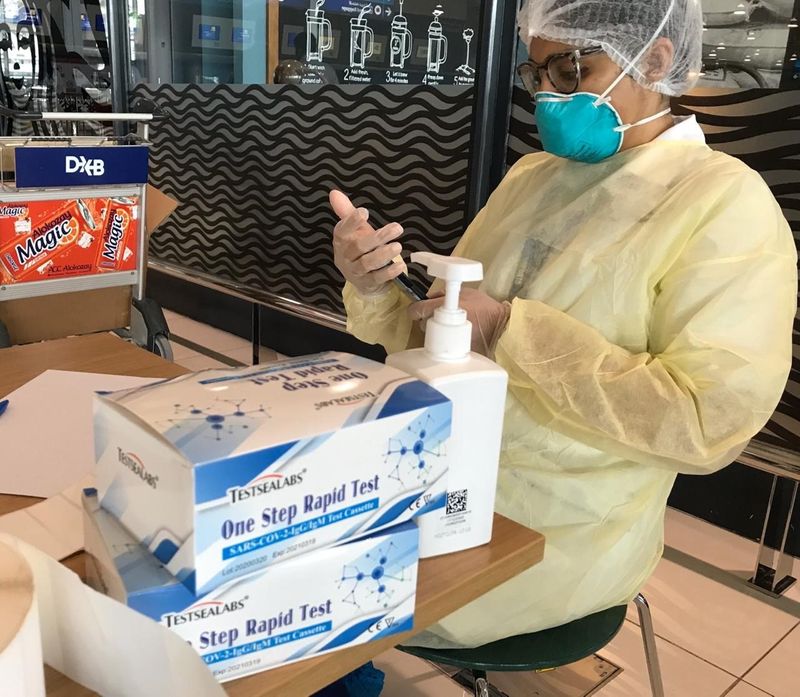 He said some workers have been told be on standby to see if they get a chance to fly in case anyone with a ticket fails in the medical screening and tests or has any immigration issues.

Vipul added that there will be two flights to Chennai tomorrow, he added.

Thanking the UAE government and health authorities for their support, Vipul appreciated the social distancing measures observed at the airport.

Sitting beside a row of trolleys used by passengers before him, Indian expat Ajith Pullanikottil, 43, called a representative from the Indian Consulate to check if he can get in the first repatriation flight of Air India Express to Kerala. 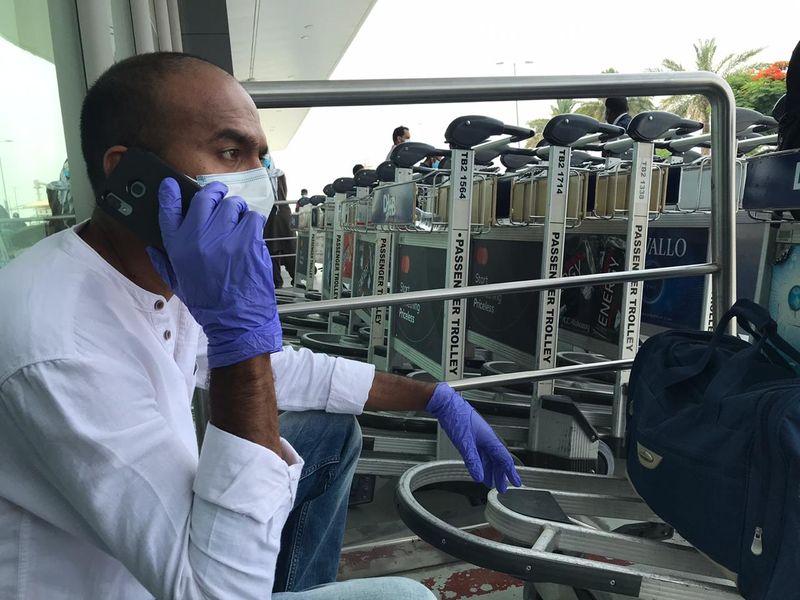 Indian expat Ajith Pullanikottil, 43, checking if he can get in the first repatriation flight of Air India Express to Kerala from Dubai. Image Credit: Angel Tesorero / Gulf News

Dubai: Sitting beside a row of trolleys used by passengers before him, Indian expat Ajith Pullanikottil, 43, called a representative from the Indian Consulate to check if he can get in the first repatriation flight of Air India Express to Kerala.

“I arrived before 12 noon. An official from the consulate told me I was put on the waiting list,” Ajith told Gulf News, adding: “I really hope to get in this flight. My mother passed away two days ago and my mind is still in a daze.”

Several residents who were put on waiting list were also outside Gate 2 at Dubai International Airport (DXB) Terminal 2. Airport security was tight. Only passengers with confirmed tickets were allowed to enter the terminal.

Ajith was carrying only a duffle bag with clothes good for only a couple of weeks and a laptop. Wearing a white shirt, blue jeans, a face mask and a pair of gloves, has been waiting at the airport for around three hours before a staff called his name.

He hoped it would be his first step on his way journey back to his home in Palakkad district, Kerala, India.

Flight crew get into their PPEs

All the crew members will put on their PPE gear before take-off. They have also been specially trained in repatriation safety, health and hygiene protocols. 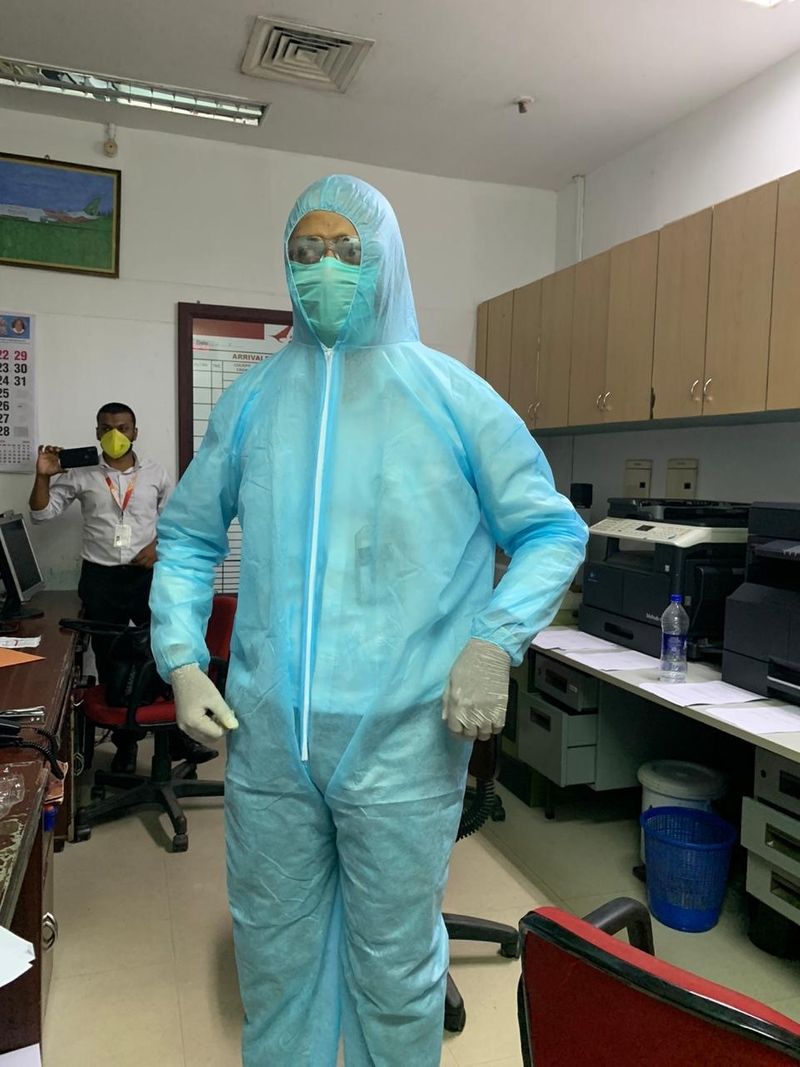 A flight crew member getting into his PPE. Image Credit: GN 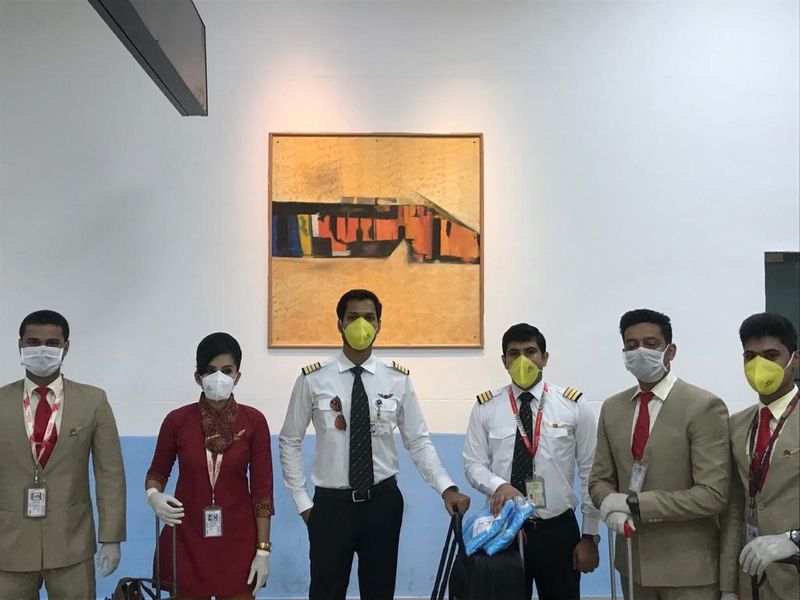 Some Indian families are going home, hoping to start life anew, including Muneeruddin, 50, who lost his job on March 1. With no immediate job prospect, he decided to leave the UAE with his wife and three children.

While the father is happy, son Ahmed Wafi , 17, is sad to leave the country. “I was born and raised here. I wish we could have lived here longer,” he told Gulf News.

'I couldn't say goodbye to my mother'

It will be an emotional homecoming for Arun Babu when he reaches Kerala. His mother recently passed away in India. “I’ve been desperate to go home. I was not able to say goodbye to my mother, but at least I will be able to see her resting place now and pay my last respects.

Is she one of the oldest to travel?

Susheela, a long-time resident of the UAE, who has been living here with her son, daughter-in-law and two grand children, is 86. She has mixed feelings about going back. 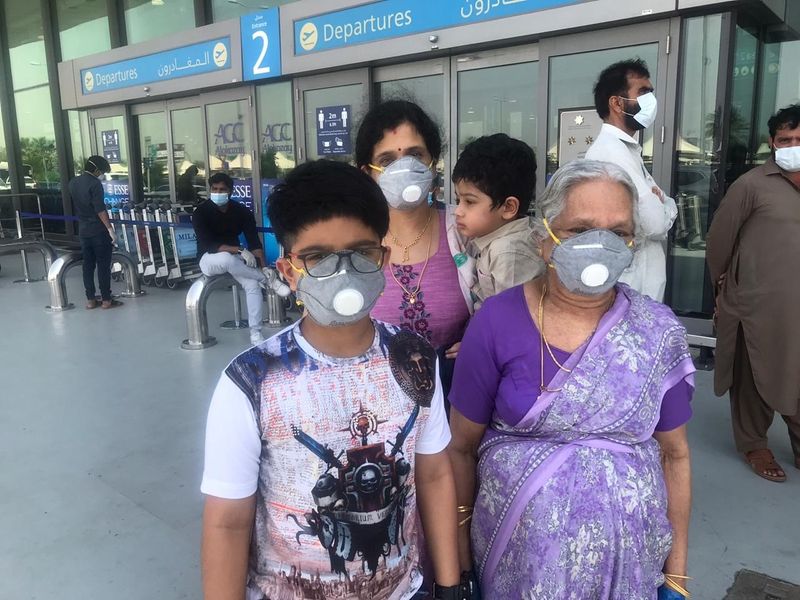 She said: “My son will continue with his job in the UAE, but the rest of us are leaving for good. This is because of the COVID-19 situation. It has been a tough decision to leave a country we have loved so much. Maybe in future we shall return.”

Dubai: Outside Gate No 2 at Dubai International Airport (DXB) Terminal 2, Indian expatriate Somi Joss, 30, was waiting for his pregnant wife to get past the immigration counter and was about to board the flight.

It was an anxious moment for the expectant father who accompanied his wife to the airport. Only passengers were allowed to enter the terminal. Airport officials were at the gates, strictly checking passports and tickets.

The couple bid an emotional farewell, but avoided giving each other a warm hug. No tearful goodbyes, only nervous anticipation that Sneha Thomas, 27, who is now eight months' pregnant, will be home soon.

Sneha is just one of the 354 Indians who are expected to take the first two flights out of the UAE to Kerala on Thursday as the Indian government began its largest evacuation mission for its stranded citizens around the world due to the coronavirus (COVID-19) pandemic.

A group of passengers who are scheduled to fly to Kozhikode on the first COVID-19 Indian repatriation flight have begun streaming in to Terminal 2 at Dubai International Airport.

Wearing masks and gloves, the passengers are now waiting for medical screening and check-in services to begin.

“I told my wife to keep me posted and call me once she gets her boarding pass. I’m both excited and anxious. My wife is traveling alone – she is carrying only one 20-kg luggage – but I’m also happy that she will finally be home to give birth to our first child,” Joss told Gulf News.

Joss said upon reaching Kozhikode International Airport, Sneha will be met by government officials, but since she is pregrant, she is not required to stay in a government quarantine centre. “Sneha will stay at her mother’s house in Wayyanad,” Joss added.

Keeping Joss company at the airport was his brother-in-law, Sebin Thomas, 26, also from Wayyanad, who himself is stranded as a tourist in Dubai for three months.

'We feel so lucky'

Another expectant mum has made her way to the airport. Aparna Lal is now 33 weeks' pregnant and is happy to be able to take the flight back home. She was accompanied by her husband, Rahul. “We feel so lucky. It would have been very tough for us to handle the delivery amid the COVID situation,” the couple, who are travelling together, told Gulf News. 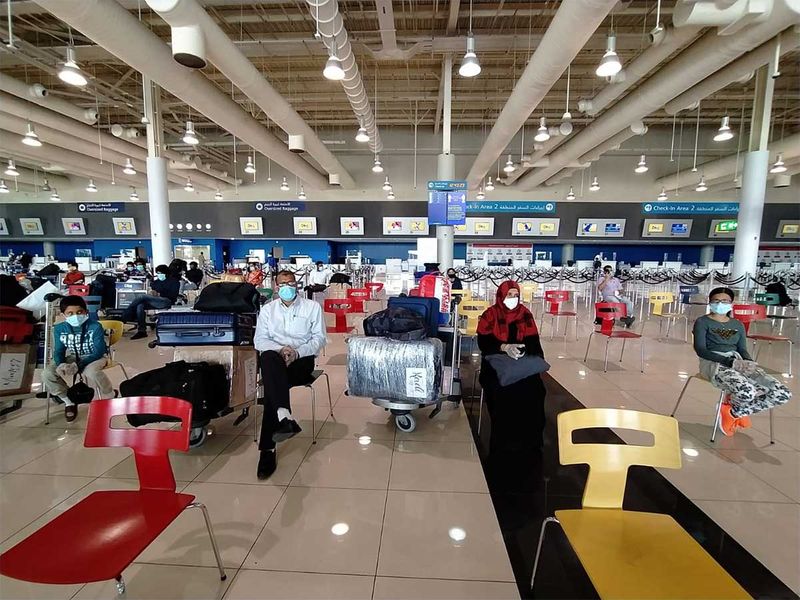 Airport officials allowed entry to the departure terminal only to passengers with tickets.

Naif resident Mahamood P.P., 60, was among the first to reach the airport as he was not informed about the change in the flight schedule, he told Gulf News.

“I reached here at 9.30am as I didn’t get any information about the 2.10pm flight getting rescheduled to evening,” he said.

Suffering from a heart disease, Mahamood, who works as a juice-maker at a shop near Naif Police Station, said he had stepped out of his room today for the first time in two months.

“As there were many cases in Naif, I never went out because of my health condition. Since I was not in contact with anyone else other than my roommates, who also never went out, I didn’t go for COVID screening. I was worried that I might be exposed to infection while waiting for the tests,” he added.

He thanked the Indian Consulate for giving him priority to fly home. “I need to go for my heart check-up. So I wanted to fly home as soon as possible.” 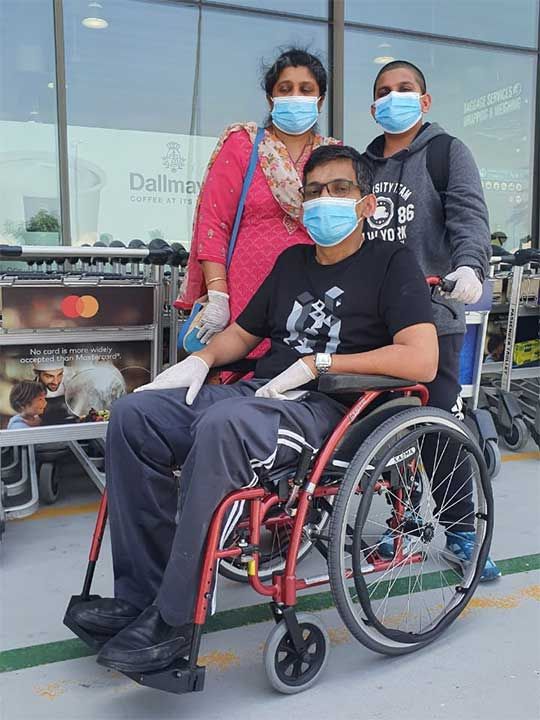 However, he said his son, a civil engineer who came here searching for a job, is not flying back though he is on a visit visa.

“Since the UAE government has allowed people on visit visa to stay here till December, he has decided to try his luck in getting a job,” said Mahamood.

Sneha Thomas, who is eight months' pregnant, was among the first to arrive at the airport.

Her husband Somi Jose came to drop her.

Thomas is among 11 pregnant women flying on the Dubai-Kozhikode flight on Thursday. 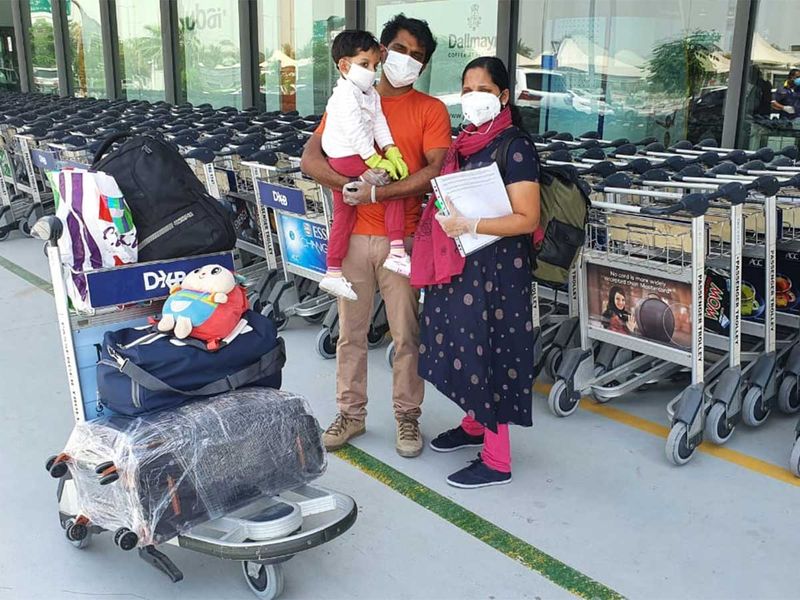 Sharjah resident for 30 years, Mohammed Ali Yaseen, who is also the secretary of the Kerala Muslim Cultural Centre in Sharjah, said he was flying home as the restaurant he was running had to be closed due to a demolition plan for the building.

“Three months ago, I got a notice to vacate the building and I had to close the restaurant. I was looking for another shop. But then the coronavirus pandemic hit us. Now there is no point in me opening a new shop as those that are already operational are not getting enough business.”

He said he decided to drop the plan and go home for now. “My visa and licence are still valid. I will try to come back when this pandemic ends and things are better.” 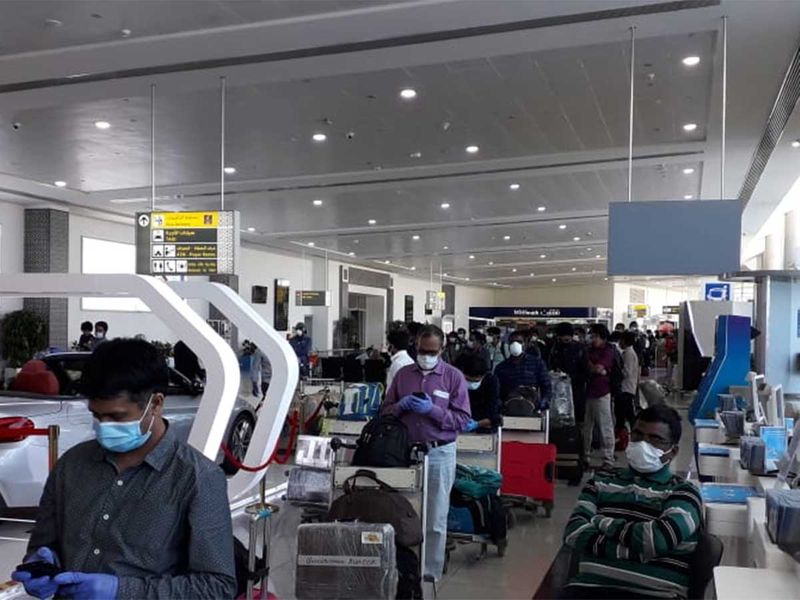 Meanwhile, at Abu Dhabi International Airport, families with children were given priority to proceed towards the check-in counters at Terminal 3. Passengers coming in were mostly women who were on visit visas. Pregnant women and the elderly, too, were given priority. 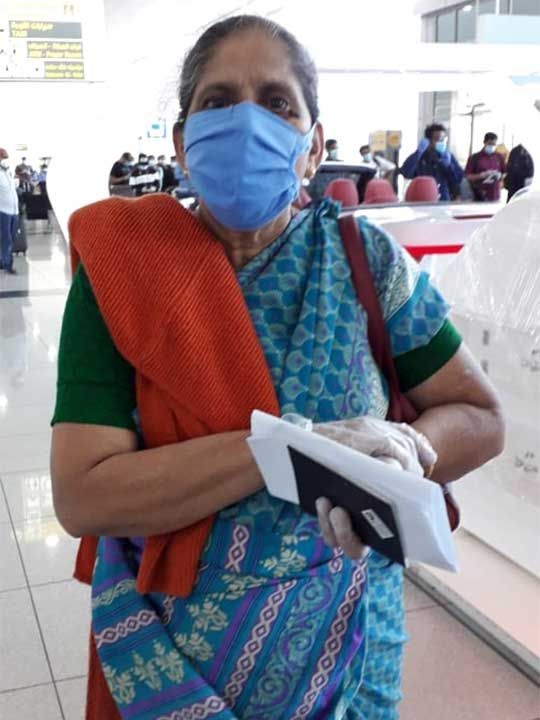 Shantama T.R., 79, is happy to go back as she has run out of her medicines for a chronic disease. Image Credit: Anwar Ahmad/Gulf News
Previous Post

Best monitors under $200 you can get right now – CNET