COVID-19 crisis: The first repatriation of Indians from the UAE was a smooth take-off

Abu Dhabi/ Dubai: A total of 363 passengers – 354 adults and nine infants – flew home on the first two repatriation flights from the UAE to India on the first day of the world’s largest evacuation exercise named “Vande Bharat Mission” taking place due to COVID-19 pandemic.

Weeks of anxious waiting ended for the passengers, wearing masks and gloves when they finally took off, with no single person being offloaded due to suspected COVID-19 symptoms. While some permanently left the UAE, which they called home for years, several others were set to return once the coronavirus mayhem ends. 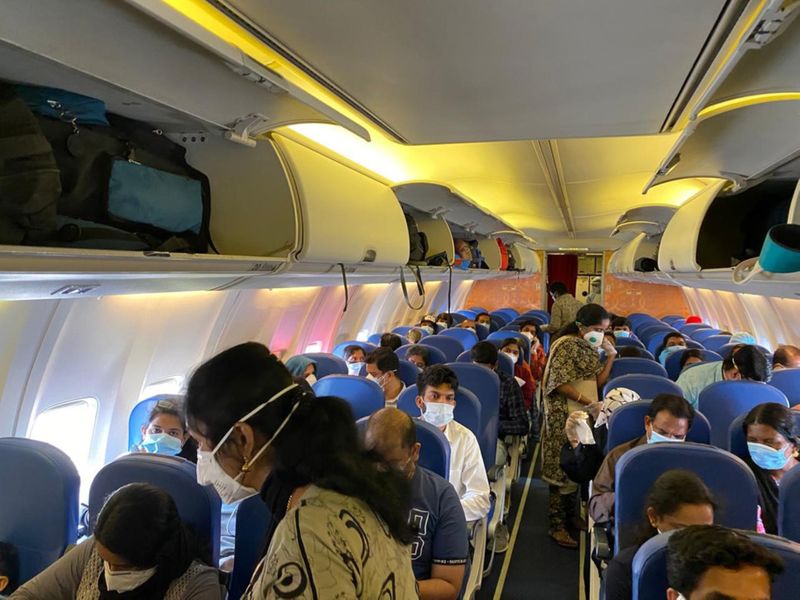 Air India Express flight IX452 from Abu Dhabi to Kochi became the first flight to take off at 5:07 pm while IX344 from Dubai to Kozhikode departed at 5:46pm, Indian officials confirmed to Gulf News.

Ajith Pullanikottil, 43, who was on the waiting list to fly home after his mother died, got the “last” ticket from Dubai after another passenger, Rasheed M, a waiter who lost job, could not fly due to huge fines for overstaying in the country after his visa expired in December, 2019.

“Destiny is with me in this sad time,” the only son who was flying for his mother’s last rites told Gulf News.

Other passengers mainly included pregnant women and their accompanying family members, people with medical emergencies, jobless workers and housemaids in distress, families with cancelled visas, a few students and stranded visitors and tourists, including twin brothers Jackson and Benson Andrews and another passenger who got stranded in Dubai International Airport for 50 days.

After the first 12 days of roughing it out in the airport and the subsequent stay in a luxury hotel, the twin brothers, who got stranded on their way home from Lisbon, said they were finally relieved that they are flying to India.

“But it might take some more time for us to reach home and see our parents as we will have to be quarantined after reaching there,” said Benson.

Kerala has announced that all passengers except pregnant women, young children and the elderly, will have to be quarantined in government-arranged facilities for at least seven days before their COVID-19 test would be done.

Indian Ambassador to the UAE Pavan Kapoor confirmed to Gulf News that not a single passenger failed the medical screening and rapid tests for COVID-19 antibodies prior to departure.

“There were so many people with medical issues. But there was not a single case of suspected COVID-19,” he said.

The envoy said the seating capacity of both the flights were restricted to 177 to leave some seats for onboard isolation in case of emergency.

The babies were mostly accompanying their pregnant mothers. More than 35 of the total passengers were pregnant women, who included Athira Geetha Sreedharan from Dubai, who had moved the Supreme Court in India to seek early evacuation of women like her who wanted to fly home for their delivery.

Kapoor said the patients, who flew from Abu Dhabi, included a woman in her 40s seeking renal transplant and another brain tumour patient.

Naif resident Mahamood P.P, 60, was among the elderly patients who flew from Dubai. Suffering from a heart disease, Mahmood, who works as a juice maker at a juice shop near Naif Police station, said he stepped out of his room for the first time in two months to catch the flight for his medical checkup back home.

Susheela,86, was among the oldest passengers. A long-time resident of the UAE, she shared mixed emotions about leaving the country for good along with her daughter-in-law and two grandchildren.

Sharjah resident for 30 years, Mohammed Ali Yaseen, who is also the secretary of the Kerala Muslim Cultural Centre in Sharjah, said he was flying home as the restaurant he was running had to be closed due to a demolition plan of the building. “I will try to come back when this pandemic ends and things are better,” he said.

Several people who had lost their jobs were also on the first flights, the missions said.

Both Kapoor and the Indian Consul General in Dubai Vipul personally oversaw the repatriation services at the airports and appreciated the excellent cooperation of the UAE authorities in facilitating medical screening, social distancing and disinfection measures.

“We are thankful to the Ministry of Foreign Affairs and International Cooperation, civil aviation authorities and health authorities for their support,” Kapoor said.

Vipul said the consulate had issued free tickets to the three passengers who were stranded in the airport and thanked the UAE authorities for facilitating their stay and accommodation along with the rest of the passengers who are still waiting for their repatriation flights.

The diplomats said their teams in cooperation with community volunteers have been striving their best to facilitate the repatriation of those with the most compelling reasons.

More than 200,000 Indians have registered for flying home while 10 flights were scheduled for the first week of repatriation that began on Thursday.

An 11th flight from Dubai to Kochi has been added on May 12 and there would be two flights from Dubai to Chennai tomorrow (Friday).

Serkis: ‘Hobbit reading will take you on an adventure’

Serkis: ‘Hobbit reading will take you on an adventure’