Coronavirus survivor heals from a coma and his mom’s death

Sohail Anjum appeared positive and upbeat for someone who’s endured a two-month-long ordeal that included a lengthy battle with COVID-19, a medically-induced coma and learning that his mother had died from the virus while he lay sleeping.

The former Dubai resident, who moved back to the UK last year, spoke to Gulf News days after he was discharged from a hospital, battle weary but eager to speak about the perils of the ongoing pandemic.

“It’s been an emotional homecoming. I guess I’m not used to seeing mum around anymore,” said Anjum, from resting in his newly installed patient bed as his body heals from the onslaught of the virus. “She would be the first person I would see whenever I came home and she was constantly checking up on me, like mothers do.”

Sohail Anjum days before he was released from the hospital after a waking up from a coma Image Credit: Supplied

Anjum’s voice may be weak, but his steely determination to speak up about the realities of the coronavirus has him soldiering on.

“I want the world to wake up and realise we are not out of the woods just yet. The reality of COVID-19 is horrifying and it needs to be taken seriously,” said Anjum. “People have already started moving out and about but the pandemic is far from over.”

“There could be asymptomatic carriers among us and we wouldn’t be aware. People still need to take this very, very seriously,” he stressed.

Forty-seven year old Anjum’s ordeal began early in March, when the threat of the coronavirus pandemic was still very much in its infancy. While he isn’t sure where he may have come into contact with the virus, he does believe that his daily commute on the London Underground could have exposed him without him even being aware. Things, as he said, were different back in March when the virus was still not being taken seriously in the UK.

“Back then, we had three markers that determined probable cause of being tested for the virus: fever, severe cough and shortness of breath. I started out with an itchy throat and a migraine,” recalled the British national, who knew something was amiss because he never even had headaches in the past. “I couldn’t get through the NHS (UK’s National Health Service) helpline so I went to my local GP to get checked up.”

With his symptoms not setting off any flags, the media executive was sent back home with the prognosis that he was suffering from a nasal or a viral infection and a dose of paracetamol would do it. However, Anjum’s condition only worsened over the following days, with a low-grade fever and severe discomfort.

Sohail Anjum weeks before he was diagnosed with coronavirus Image Credit: Supplied

When Anjum reached out to his GP a second time, he was promptly informed that his condition may be the early stage of the flu and he was told to continue with his dose of paracetamol.

“My condition kept worsening with a cough now fully developed and severe shortness of breath,” recalled Anjum. “Here I was, miserable and sick and couldn’t get anyone to take my condition seriously and I was reading that actor Idris Elba had somehow managed to get tested for the coronavirus without any symptoms.”

By March 20, Anjum had had enough and rang up his younger brother Aqueel Anjum Mohammad to take him to the local A + E, the Croydon University Hospital.

“As soon as I was taken in, the hospital checked my oxygen levels and took me straight into one of the wards. I was there for a few hours before a consultant came up to me during the middle of the night to say that they needed to put me in a medically-induced sleep. I was so tired at that point, that all I recall saying was ‘do what you have to do’ and that’s all I remember.

“I woke up almost a month later — I was in an induced coma 23 days — and had to be taken off the ventilator and woken up slowly. They transferred me to the CTU soon after and the first person I asked about was my mum.”

Dealing with the aftermath

Sohail Anjum in the hospital in the UK Image Credit: Supplied

Unbeknown to Anjum, mere days after he was placed in a medical coma, his mother Rashida Mohammad started showing the first symptoms of the virus.

The 81-year-old Rasheeda suffered from a previous chronic illness and was at high risk of being infected by the virus. With her condition worsening, the family, including her husband and daughter-in-law, took the call to have her taken to the same hospital where Anjum was fighting his own battle.

Two days after she was admitted, Rasheeda died on a floor below Anjum’s, never getting a chance to see her son or the latter being able to say his goodbyes.

Anjum stated that he was almost certain when he woke up that his mum had passed.

“I had a suspicion she had died. It may sound strange, but it came to me in a vision,” said the older son, pausing for a few minutes before he continued. “I learnt she was admitted to the hospital after a few days after I was put to the sleep, complaining of a shortness of breath. We never even got to say goodbye.” 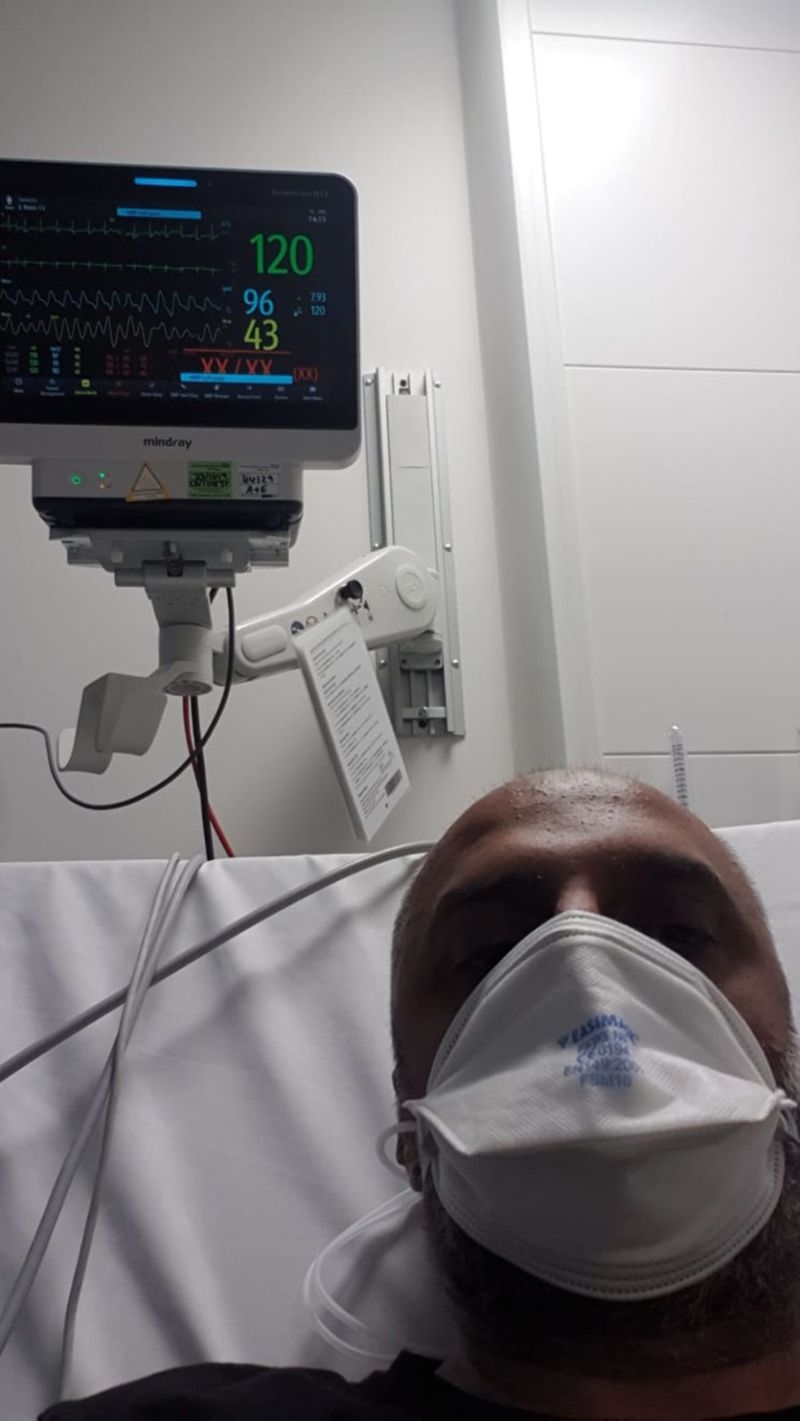 Sohail Anjum credit the NHS and the first responders for healing him Image Credit: Supplied

In his weakened state, Anjum also learnt of his own condition from his brother over phone conversations. “My oxygen requirements were 80 per cent when I was brought in and had severe pneumonia. The NHS staff had pumped me with a course of heavy antibiotics and had given my family a 50 per cent chance that I would pull through. It could have gone either ways.”

He continued: “At one point during the treatment, I got blood poisoning. My brother was getting daily updates from the doctors and it was touch and go. Aqueel then told me that my vitals started improving after mum passed away. I firmly believe it was her blessings that pulled me through from certain death.”

Recovery for the active young man has been a slow and painful process. Anjum revealed that he was completely immobile, being unable to stand or walk in the immediate aftermath. “My muscles had shut down due to lack of movement for more than a month and the nurses had to do everything for me until I was ready for physiotherapy.”

While his days and nights were long in the recovery bed, Anjum also had to watch two patients die in his ward. “One of the patients was an elderly gentlemen who appeared disorientated. He was trying to climb out of bed and the next thing, he was slumped back against the pillow. I pressed the emergency buzzer, but it was already too late.”

The second patient, according to Anjum, was on an adjacent bed, who died days later due to too much fluid in his lungs. 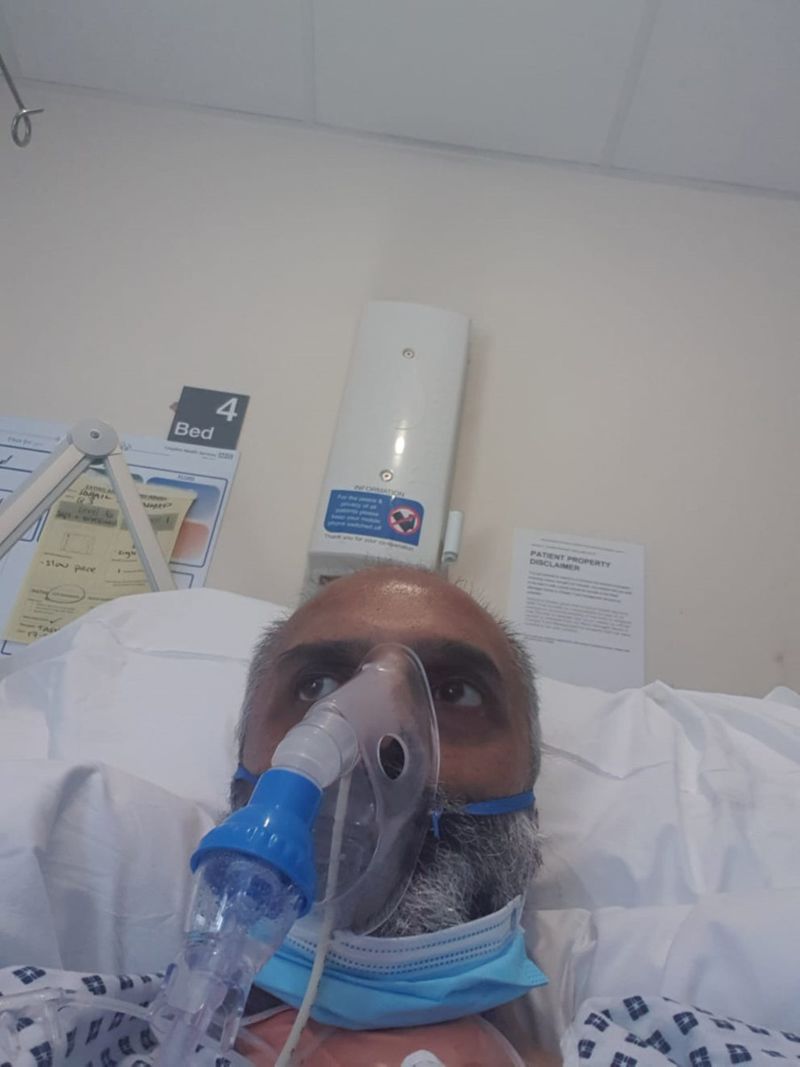 His days in the hospital were bleak, but Anjum’s spirit refused to let him give up the fight. Finally, on May 1, he was given the all clear to be discharged from the hospital and was ready to heal at home.

“As they wheeled me out of the war, all the nurses lined up on both sides and applauded and encouraged me. I was a success story in this pandemic and if it wasn’t for the NHS and their dedicated staff, I wouldn’t be here today talking to you. They medical staff and the first responders are the true heroes here,” he said.

Spending close to 40 days in the hospital, Anjum is happy to be alive and home, but is acutely aware the healing is far from over.

“I have a patient bed installed at home now, with an occupational therapist and a physiotherapist who will be visiting me regularly. My wife Humeira is now the man of the house and continues to take care of us and encourages me to walk every day and I have crutches to support me. Baby steps, she says and that’s what my healing will be,” he said.

The clean-shaven young man who was wheeled into the hospital in March has exited today with a salt and pepper beard, which Anjum joked was his ‘Gandalf the Great’ impersonation, a reference to the famous character from ‘The Lord of the Rings’, which he plans to grow out.

Anjum added that his office, a local TV channel, has also been very supportive through his ordeal and has a job waiting for him once he’s back on his feet. 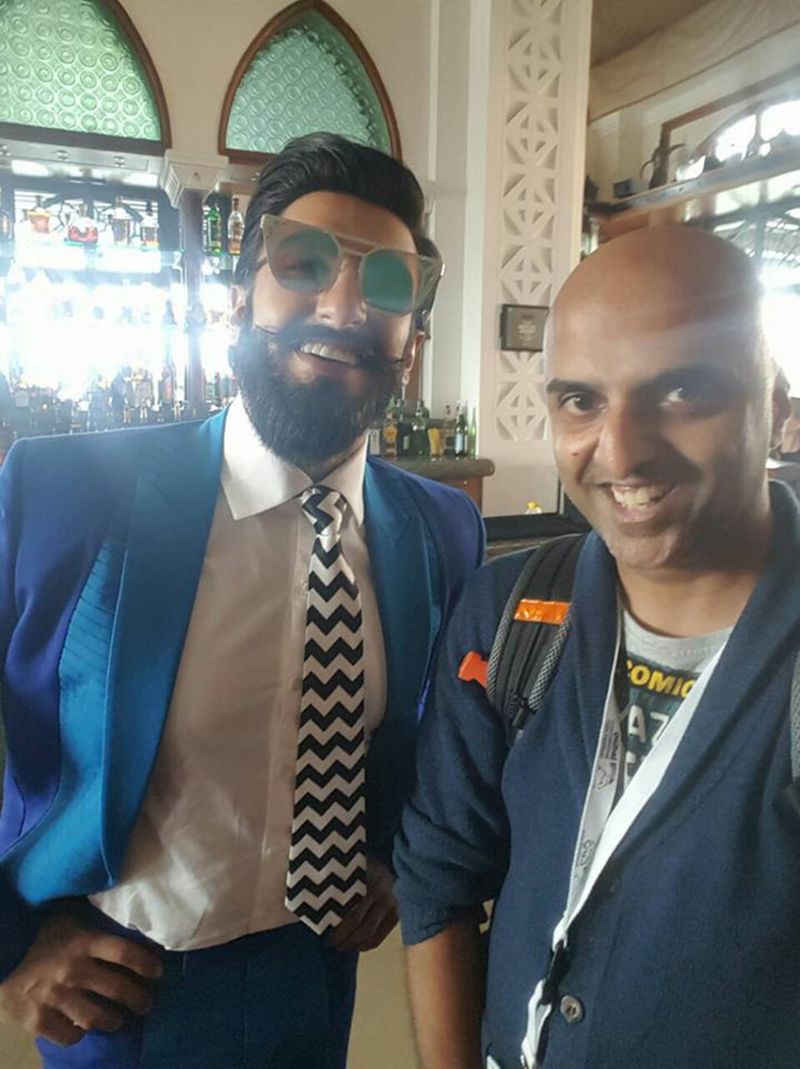 “The outpouring of love and support has been amazing,” he stated. “Friends here in the UK, those in Dubai and in Pakistan have been calling and messaging with words of encouragement. Even celebrities who I have interviewed over the years, such as Abhishek Bachchan, have asked after me, while Pakistani singer-actor Ali Zafar was sweet enough to record a special video message once he learnt that I had come out of the coma.”

Sohail Anjum in the UAE, where he lived between 2013 and 2019 Image Credit: Supplied

While Anjum still has a few months of healing ahead of him before he can return to work, the young son wants his first outing to be a visit to his mother’s grave.

“It will be an emotional moment. I didn’t expect her to go so soon,” said Anjum. “She was poorly over Christmas and the doctors had suspected pneumonia at the time but we thought she was getting better. This was all so sudden that we never got to say our goodbyes. I need that for both of us.”

Joe Wicks: The Body Coach is assisted by wife Rosie for PE lesson