Coronavirus in Africa: ‘No time for half measures in helping the economy’

Coronavirus in Africa: 'No time for half measures in helping the economy'

Not only could coronavirus "cause thousands of deaths" in Africa, but it has the potential to "unleash economic and social devastation", according to the head of the World Health Organization for the continent, Matshido Moeti.

Her words are a reminder that the pandemic is not only a health emergency.

A year ago, the World Bank's Africa Pulse report was forecasting sub-Saharan economies to grow in 2019 and 2020 by around 2.8%.

A fragile rate, disguising some more promising news, but now the bank forecasts that the region will fall into its first recession in 25 years, with the overall economy shrinking by somewhere between 2.1% and 5.1%, because of the impact of the spread of Covid-19.

The World Bank says the effects of Covid-19 on the continent can essentially be broken down into three areas:

The price of oil, although it has recovered slightly, is far below what it needs to be to help Nigeria's government to budget properly, or to pull Angola out of recession.

Copper prices have been on a downward slope for nearly a decade. But in the last month, coronavirus has pushed them off a cliff. That is extremely bad news for exporters such as Zambia.

Until very recently, palladium and platinum were the darlings of the mining industries in South Africa and Zimbabwe, because of their use in catalytic converters in vehicles. But when coronavirus fears closed car plants across the world, the prices of the metals halved in a matter of days.

Foreign direct investment (FDI) has slowed to a trickle.

In 2018, according to the UN's trade and development body, Unctad, FDI into the continent was on the rise and looking good. But now, Unctad says that as a result of coronavirus, investment could fall by as much as 15%.

Remittances had a strong year in 2019.

The World Bank estimated that $49bn was sent home by Africans in the diaspora, $2bn more than 2018.

It was thought that 2020 would be even better. But now that so much of Europe, the US and China are in lockdown, jobs are being lost and remittances are under serious threat.

Countries including The Gambia, Zimbabwe and Liberia, where a quarter of GDP is made up of remittances, rely on the money and goods sent from abroad. Without them, large numbers of people have huge holes in their personal budgets.

It is estimated around 67 million tourists came to Africa in 2018, and the money they spent supported more than 20 million jobs, contributing about 8% of the continent's GDP.

The coronavirus has grounded whole airline fleets, emptied hotels and closed tourist attractions and restaurants. The outbreak came at a time when tourism was increasing in Africa, especially from China, and now economists feel the sector will take a big hit.

An African Union report said that it could lose at least $50bn and two million jobs connected to the industry.

The price of lockdowns

But in the short term, the immediate economic hardship for many Africans is being felt through the lockdowns. 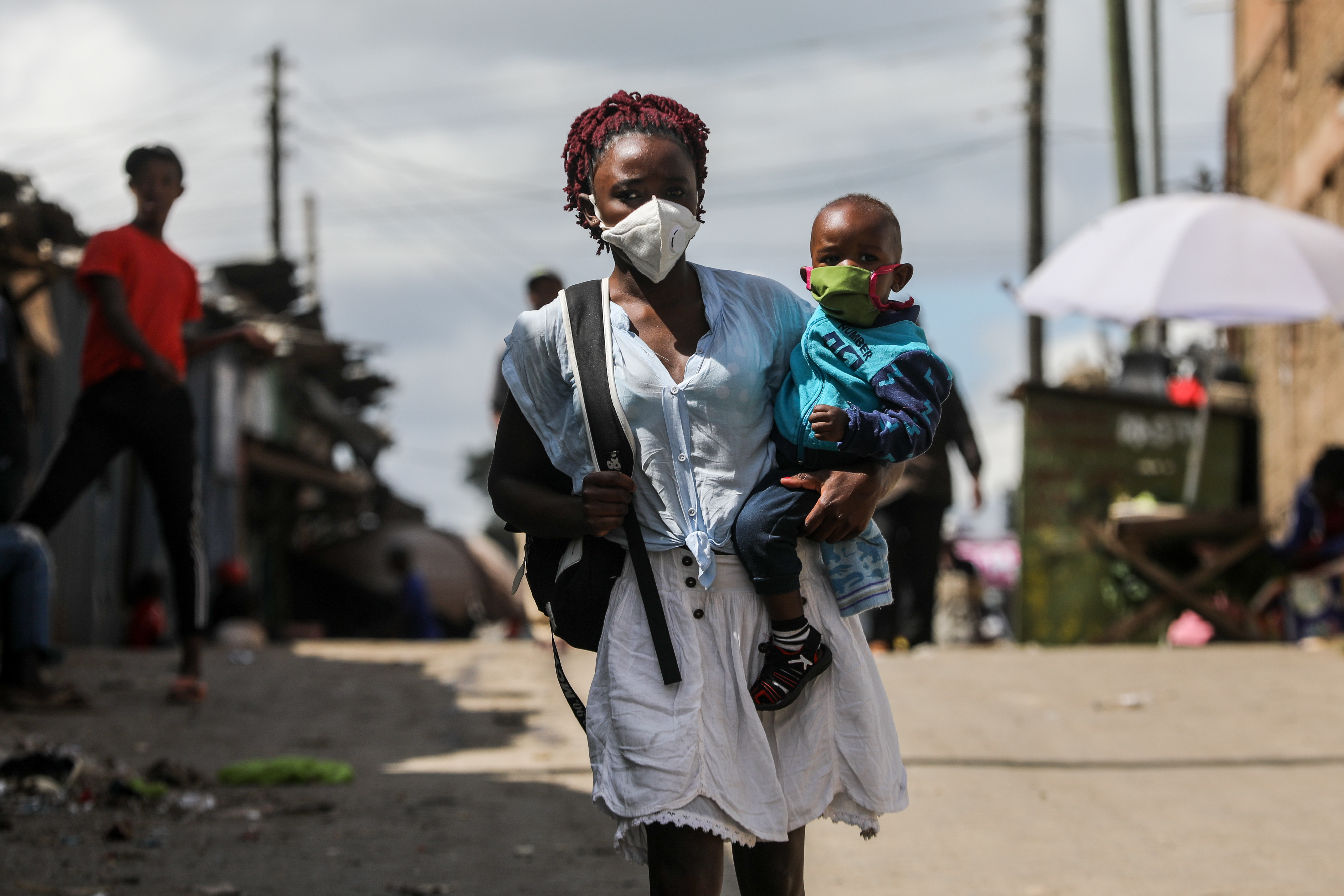 To varying degrees, several African governments have placed restrictions on their citizens from curfews to social distancing, from travel bans to a prohibition on alcohol sales.

Seen by some as crucial to stop the spread of coronavirus, the measures have been met with different levels of success and in many cases have had to be adapted.

But they come with their own warning.

"Social upheaval is very likely if the measures are not accompanied by relief and stronger social safety nets for the vulnerable populations," said Brahima Sangafowa Coulibaly, a senior fellow and director of the Africa Growth Initiative at the Brookings Institution.

"The populations in confinement could face the uncomfortable choice between the certainty of death by starvation or some risks of death by Covid-19, unless the government steps up the relief efforts."

The rising cost of debt

One further consequence of the virus will be a growing debt repayment bill.

Plunging commodity prices, weaker currencies and ballooning deficits mean African governments are spending more on their debts rather than ploughing it into healthcare.

The simple answer is for creditors to offer debt relief. And this week, that has been forthcoming from one quarter at least.

The IMF announced that it would be giving debt relief to 25 countries, including 19 in Africa. The cessation of interest payments for six months goes some way to answering the recent calls led by Ethiopia but it is only a small part of the picture.

There has been no mention yet of restructuring of long-term debt, including write-offs for the poorest African nations.

Getting to that stage is more complicated than it once was.

Almost a quarter of a century ago, when the IMF and World Bank set up the Heavily Indebted Poor Countries (HIPC) debt relief programme, African nations mainly owed money to wealthy countries and multilateral institutions.

But nowadays, private lenders play a much bigger role, a fact that is illustrated by the rise in Eurobond issues, bought by private investors, by various African governments in the last 10 years.

Whether private lenders and holders of Eurobond issues are willing to forgo interest payments immediately is unclear.

"The complicated structure makes it harder, undoubtedly. But let's do what we can," said Masood Ahmed, president of the Center for Global Development in Washington.

The IMF and the World Bank have put about $64bn of global aid on the table to fight coronavirus. Ethiopia says that is not enough and that at least $150bn is needed in Africa alone.

While rich countries have the luxury of low interest rates to finance huge stimulus programmes to help weather the coronavirus economic storm, that option is not available to most African countries.

African central banks have been cutting interest rates, but as fewer people have mortgages and bank loans than in more developed economies, this does not have the same impact.

South Africa has also said that it will put $66m aside to help small-scale farmers, so that food production can be supported. Other African governments, like Nigeria, have pledged financial support for the most vulnerable people, but there is not much evidence of this so far.

But if governments try to borrow more money, the debt repayments will rise. Tim Jones, from the Jubilee Debt Campaign, argued because of that, simply dishing out more aid cash is not the answer.

"Without a moratorium on debt payments, it's not going to stay in country. It's going to be used to pay back various creditors," he said.

So far, Africa seems to have escaped the rapid escalation of infections that have characterised the outbreaks in some European countries and the United States.

Many believe Africa is experiencing the lull before the storm in this sense.

But on the economic front, the continent is already feeling the effects of coronavirus with the loss of jobs and a profound slowdown in activity, which could push some parts of Africa further into life-threatening poverty.

Some observers are already suggesting that more lives could be lost in the fight against Covid-19, than to the disease itself.

To stop this, Abebe Aemro Selassie, head of the IMF's Africa Department, feels policy makers need to be thinking outside the box.

"Now is really not the time for half measures," he said.

Coronavirus: Fears of spike in poaching as pandemic poverty strikes