Coronavirus crisis: Dozens of Americans stranded in Tonga appeal for help to get out as cyclone hits

Coronavirus crisis: Dozens of Americans stranded in Tonga appeal for help to get out as cyclone hitsclose

America Together: Uplifting images of Americans pulling together during coronavirus pandemic

Every day and in every community, the coronavirus pandemic is bringing out the best in Americans. Take a look at some inspiring images of Americans pulling together in a time of crisis.

Tonga is a small parcel of paradise that has become a living hell for dozens of Americans stranded there.

On March 21 – as coronavirus shook the globe – flights from Tonga to Fiji and New Zealand were abruptly canceled with no prior alerts or notifications, Americans on the island claim, leaving hundreds of people stranded with no way home.

"We are aware of four full flights out that were abruptly canceled, (people) on them had been confirming throughout the week, and everyone was taken by sudden surprise when they (were not allowed to board)," Dr. Jason Weeks, a U.S.-based physician attempting to coordinate options for getting Americans home to their families, told Fox News.

Tonga, with a population of just over 100,000, is made up of a cluster of more than 150 islands. It is a Polynesian sovereign state and archipelago, ringed by Fiji, Samoa, Vanuatu, Wallis and Futuna, and New Zealand's North Island. 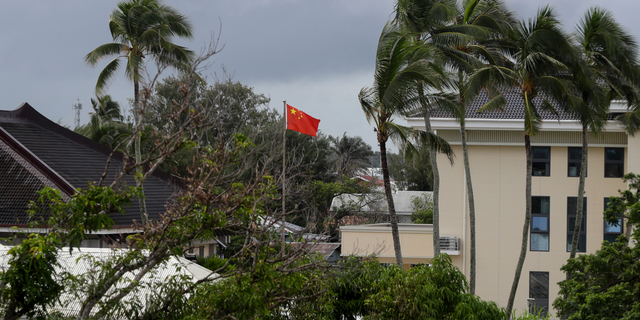 In this April 8, 2019, photo, a Chinese flag flies outside the Chinese Embassy in Nuku'alofa, Tonga. (AP)

It currently has no recorded cases of coronavirus and has taken stringent border control measures to limit any individuals from entering its terrain.

According to Weeks, there are at least 60 Americans of all ages who have come forward with pleas to get home, but there is believed to be more than 100 – with many more unable to access the internet as a result of ongoing inclement weather. Among them is one expectant mother – who is gravely concerned about medical resources – and an older man who has now run out of his heart medication, which is not accessible in Tonga.

"Two charters were sent to Tonga to recover a National Geographic film crew, and a Mormon family sent a jet for a missionary couple," Weeks said. "No one has been in or out of Tonga since. That was the 21st and 23rd of March."

All flights out of Tonga must fly through Fiji, and then on to New Zealand, Hawaii or Los Angeles. Some U.S. citizens said that they reached out to their closest embassy in Suva, Fiji, and to the airlines, "with nothing but an empty response." Many of those left aground have formed a Facebook group entitled "US Citizen and Residents stuck in Tonga," swapping nuggets of information and sharing tales of torment.

Making matters worse, the region was battered by Cyclone Harold last week, crippling swaths of Tonga. It has rendered many without power or Internet access for days. Several of the Americans there are pooling resources with other families to get through the blackout.

Tanya Lata told Fox News via email that she and her husband Danny had been visiting Tonga for their combined birthday celebration when family at home in the U.S. cautioned that President Trump might shutter the U.S. border. They immediately visited a Fiji Air booking office to ensure they were on the next available flight home, scheduled for the following day, March 21.

"When we arrived at the airport, we were denied boarding as they were only allowing Fijian citizens on the flight due to the border closure," Lata, an Oregon-based nurse, explained. "Per the attendant, there were only five individuals who were allowed to board. We have three kids away from our home in Oregon. They are currently in California with their uncle waiting for our return." 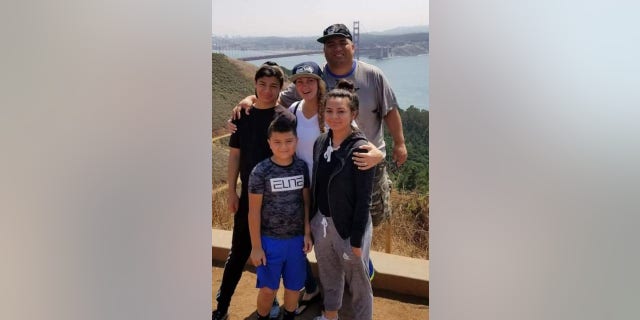 Lata stressed that their eldest has a seizure disorder "and has had an increase in seizure activity due to lack of sleep, loss of appetite, and stress of being away from home and worrying about (her parents)."

"My husband is a Chef at a retirement home, and I am a Registered nurse for our local hospital in Salem, Oregon," she continued. "We need to get home to our family and back to work to assist our co-workers currently on the frontlines caring for those directly affected by COVID-19."

"Most of these travelers are already two to three weeks past their expected stay, have run out of money, have no way home, and have families looking for their security and support during such an uncertain time here in the US where they belong," Weeks, who has been helping to take care of the Tongamoa family in Georgia, lamented.

Salesi Tongamoa, 36, who works two jobs in his hometown of Marietta – in junk removal and in bar management – to support his young family had traveled to Tonga at the beginning of March to lay his father to rest. As the pandemic began its sudden escalation, he moved his flight to the earliest available – informed it was March 21.

The airline said there should not be a problem, Tongamoa recalled, but on arrival he was told by airport workers that he was not even permitted to go inside. 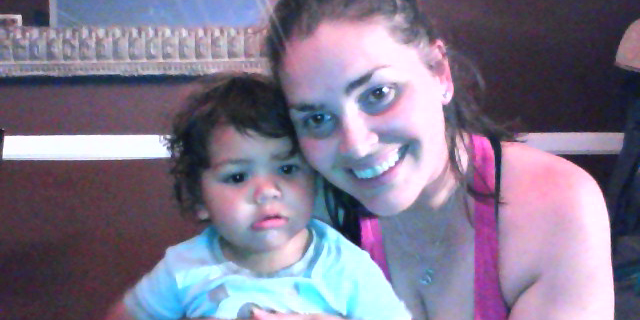 The family of Salesi Tongamoa, 36, who works two jobs in his hometown of Marietta – in junk removal and in bar management – to support his young family had traveled to Tonga at the beginning of March to lay his father to rest. (Provided)

"There are no options at this moment, we aren't being told anything," he underscored, reflecting on his three children aged 10, 6 and 1. "My wife has been taking care of them and worry if I will ever hold my family again. This is my world. If any of them get sick, and something happens, I don't know if I can ever live knowing I am miles and miles away and helpless."

But finances too are fast faltering, Tongamoa said.

HOW IS THE CORONAVIRUS MUTATING INTO DIFFERENT STRAINS?

Some of the stranded Americans told Fox News that they were given a sliver of hope earlier this month, when they received a notification from the Embassy in Fiji about a flight out of Fiji to New Zealand on April 13 and were urged to quickly book a seat as the seating was limited. But the hope turned out to be a false one, some opined, and were informed the flight was for New Zealand passport holders only. 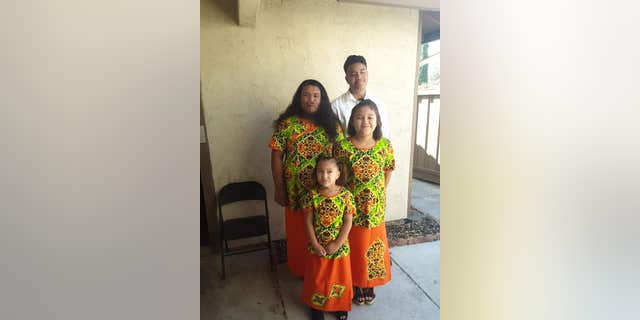 Salote Kalilea Grewe is desperate to get home to his children in the U.S. (Provided)

Then there is Salote Kalilea Grewe, 37, a dispatcher from Antioch, Calif., who also emphasized that he was not informed his flight was halted until three hours prior to takeoff.

“It is so important for me to get home I have four children that have no mother in America, and all of them are under the age of 16,” he said. “Every day is a struggle to see them through messenger, trying to hide the feelings of giving up from them. The truth is I give up every day but when I see their faces on messenger it gives me hope.”

Grewe added: “I would do anything just to hold them again. I've been away from them for a whole month and it is eating me up inside that I can't do anything to see my babies again.

“If anyone out there that can hear me please help me to get home to my babies. I just want to hold my babies again.”

The U.S. State Department did not immediately respond to a request for comment. However, the department cautions on its travel advisory, published on March 31st and almost two weeks after the Tonga shutdown, that U.S. citizens who live abroad should avoid all international travel.

On Monday, Secretary of State Mike Pompeo took to Twitter to praise the coordinated efforts of U.S. embassies and consulates around the globe in bringing some 700 Americans home amid the devastating pandemic.

Huawei ban: Full timeline as it warns against disrupting its role in Britain’s 5G rollout – CNET

Hope US Funding Will Continue In COVID-19 Fight, Says WHO Chief

Hope US Funding Will Continue In COVID-19 Fight, Says WHO Chief