Clashes broke out along the Greece-Turkey land border Wednesday morning as Greek authorities fired tear gas and stun grenades to push back hundreds of migrants trying to illegally cross into their country.

The fracas near the border village of Kastanies comes after Turkey made good on its threat to open its borders and send migrants into Europe last week.

Turkish President Recep Tayyip Erdogan, whose action triggered days of violent clashes along the border, said his country is unable to cope with a new wave of Syrian migrants and refugees, and demands Europe’s support. 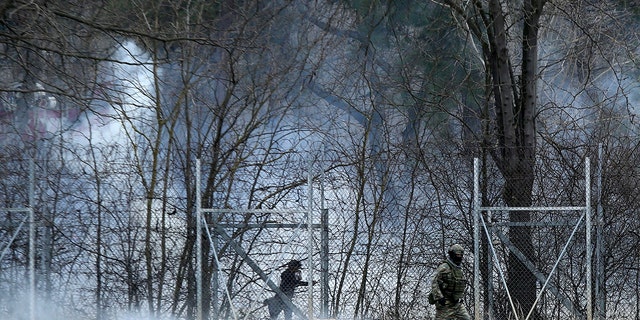 A Greek army officer patrols as a migrant is seen at the Turkish side at the Greek-Turkish border in Kastanies on Wednesday, March 4, 2020. Facing a potential wave of nearly a million people fleeing fighting in northern Syria, Turkey has thrown open its borders with Greece to thousands of refugees and other migrants trying to enter Europe, and has threatened to send "millions" more. (AP Photo/Giannis Papanikos)

“It’s done, the gates are open,” he said Monday. “You will have your share of this burden now.”

Turkey is home to more than 3.5 million Syrian refugees.

Turkish authorities claimed one person was killed and five wounded in the clashes after Greek police and border units fired tear gas, black bullets and live rounds at a group of migrants gathered between the Turkish and Greek gates of Pazarkule and Kastanies. 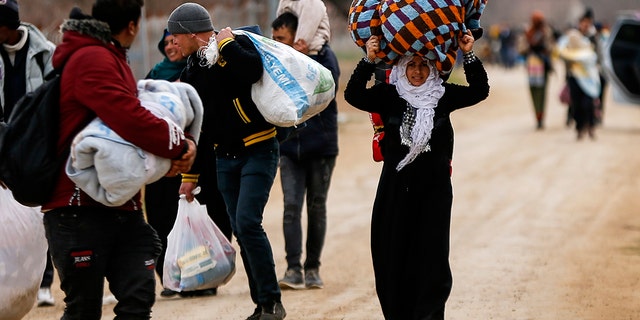 A woman carries her belongings as she walks with other migrants at the Turkish-Greek border in Pazarkule on Wednesday, March 4, 2020. Greek authorities fired tear gas and stun grenades Wednesday morning to repulse a push by migrants to cross its land border from Turkey, as pressure continued along its frontier after Turkey said its own border with Europe was open to whoever wanted to cross. (AP Photo/Emrah Gurel)

The Greek government denied any migrants were wounded or killed by Greek authorities.

“The Turkish side creates and disperses fake news targeted against Greece. Today they created yet another such falsehood,” Greek government spokesman Stelios Petsas said. “There is no such incident with fire from the Greek authorities.”

On Wednesday, Turkey’s ambassador to the United Kingdom, Umit Yalcin, accused the European Union of “betrayal, hypocrisy and selfishness” for failing to uphold its agreement to stem the flow of Syrian refugees and migrants into Europe.

“We did our fulfillment of our commitment and they did not do anything,” Yalcin told Sky News, referring to the accusation by Ankara that Brussels failed to meet the terms of the migration deal struck in March 2016. “And because of that – enough is enough. We are overloaded. We cannot control millions and millions of people.” 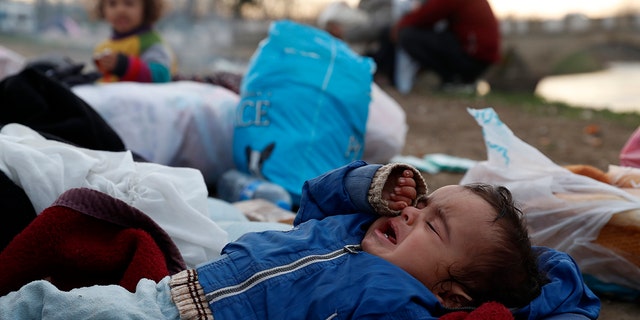 A baby cries as migrants gather next to a river in Edirne, Turkey, near Turkish-Greek border on Wednesday, March 4, 2020. Facing a potential wave of nearly a million people fleeing fighting in northern Syria, Turkey has thrown open its borders with Greece to thousands of refugees and other migrants trying to enter Europe, and has threatened to send "millions" more. (AP Photo/Darko Bandic)

He continued: “We only ask for fair and equal responsibility-sharing and burden-sharing. We only want to see the fulfillment of that deal, not more.”

The March 2016 deal said that Turkey agreed to stop migrants and refugees crossing into Europe in return of $6.6 billion and enhanced EU-Turkey ties, including visa-free travel for Turkish citizens.

“It is a betrayal, hypocrisy, and selfishness and it is not sincere, it is not fair,” Yalcin said. “If they can only fulfill their commitments in that agreement I think that would be wonderful.”

During the clashes earlier Wednesday, reporters on the Greek side of the border heard what sounded like gunfire, though it was unclear whether this was live ammunition.

A group of people could be seen carrying something which could have been a person between them and running to the Turkish border post. Shortly afterward, an ambulance was heard leaving.

Reporters on the Turkish side of the border saw at least four ambulances leave the area. 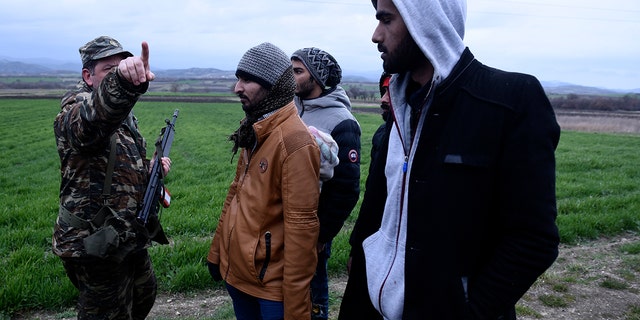 A Greek army officer detains migrants in the village of Ardanio at the Greek-Turkish border on Wednesday, March 4, 2020. (AP Photo/Giannis Papanikos)

The head of emergency services at Edirne's Trakya University Hospital, Burak Sayhan, told journalists six people had been admitted to the emergency department Wednesday, including one who was dead on arrival. He said one person had been shot in the head, two had gunshot wounds to their lower and upper extremities and one had a broken nose.

The mass movement of migrants and refugees to Greece's borders, the majority of who appeared to be from Afghanistan, has appeared organized. Buses, minibusses, cars, and taxis were organized in Istanbul to ferry people to the border, while some of those who managed to cross have said they were told by Turkish authorities to go to Greece and that the border was open.

Greek authorities said there were about 15,000 people along the Greek-Turkish land border on Wednesday. They said that between Saturday morning and Wednesday morning, they had blocked 27,832 attempts to cross the border, and had arrested a total of 220 people who managed to cross.

Italy to close all schools and universities amid Coronavirus surge