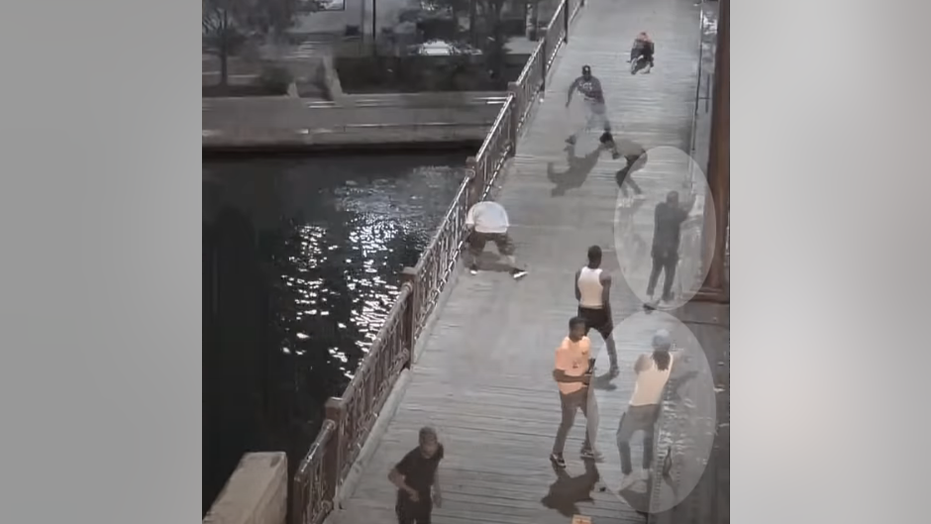 The shooting, on a bridge along the Chicago River around 2:30 a.m. local time Sunday, left a man dead and a woman wounded, authorities said.

"Detectives are seeking to identify persons who were involved in, or witnessed, the shooting," police said.

The nearly four-minute video shows a group of about 10 men walking on the Wabash Avenue Bridge before a few of them look off toward the street. Police highlight one man wearing black pants and a black T-shirt who then pulls out a gun and holds it in his right hand.

A few moments later, the man opens fire, as another suspect behind him appears to pull out a weapon and fire off a few rounds.

Chaos quickly ensues as people scramble for cover and drop to the ground.

The man killed was identified as Gregory Crawford, of Maywood, according to the Chicago Tribune. He died at a hospital after being shot once in the neck while driving. His female passenger was shot in both arms and was taken to the same hospital.

The shooting was part of another bloody weekend in Chicago that left a total of 10 people dead from gun violence and 60 wounded – including 10 minors, police said.

Police on Wednesday were still attempting to identify the bridge shooters who they considered "armed and dangerous." They advised residents that if they see the individuals or their vehicle, they should call 911 rather than approach the suspects.

Anyone with more information is asked to contact Area Three Detectives at 312-744-8261 or submit an anonymous tip at www.CPDTIP.com.

Amid India-China tension, IAF to boost Rafale capabilities with HAMMER missiles from France

Amid India-China tension, IAF to boost Rafale capabilities with HAMMER missiles from France