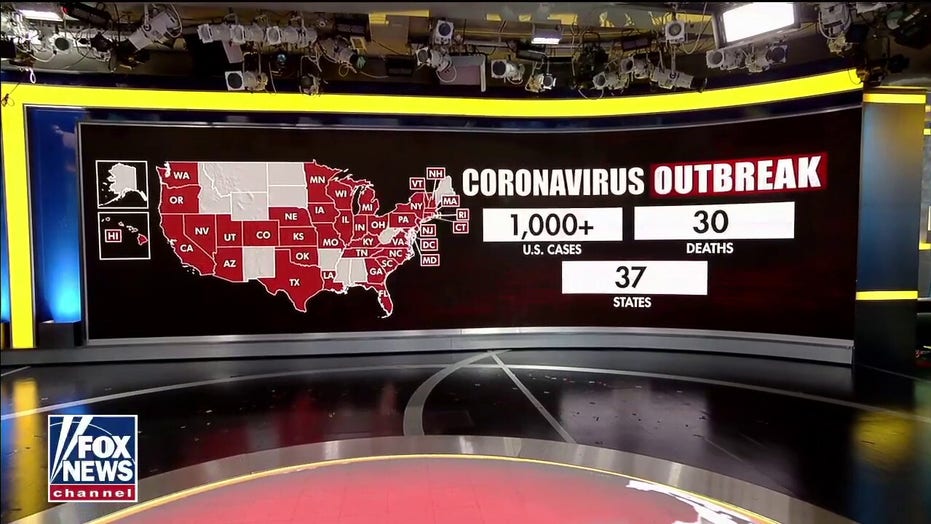 Over 1,000 people in 37 states infected with coronavirus

30 people in the United States have died from coronavirus as the National Guard creates the nation's first containment zone in New Rochelle, N.Y.

Chicago announced Wednesday it is canceling its annual St. Patrick’s Day parades amid concerns about the spread of the coronavirus.

The annual St. Patrick’s Day parades in Chicago on March 17 are some of the largest in the country, attracting more than a million people a year, with many spectators traveling from other states to watch the Chicago River dyed green for Ireland.

WASHINGTON BANS GATHERINGS OF 250+ PEOPLE IN SEATTLE AREA, OTHER STATES REACT AS US GRAPPLES WITH CORONAVIRUS OUTBREAK

The city said in a press release that it will continue working with organizers from Chicago’s downtown, South Side, and Northwest Side parades, as well as the annual Dyeing of the Chicago River, to reschedule these events at a later date and ensure the health and safety of Chicago’s residents and visitors.

“The health and safety of Chicago’s residents will always be our highest priority and like many other cities across the nation and globe, we are postponing this year’s parade as a precautionary measure to prevent any additional spread of COVID-19,” Mayor Lori Lightfoot said in a statement. “I want everyone to rest assured that your City and State continue to work around the clock to stay ahead of this issue and ensure everyone remains protected, informed, and safe.” 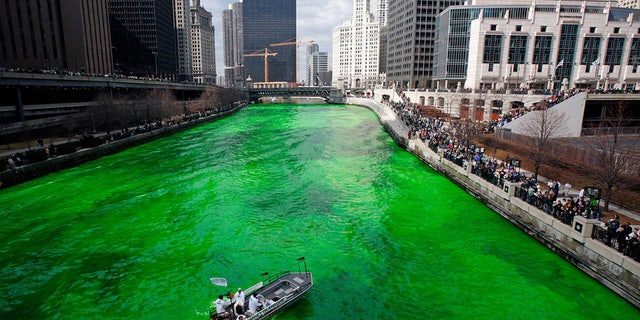 Chicago’s downtown, South Side, and Northwest Side parades, as well as the annual Dyeing of the Chicago River are to be rescheduled amid coronavirus concerns. (REUTERS)

“We all know what the St. Patrick’s Day celebrations mean to us in the city of Chicago — but as elected leaders, we can’t take any chances with the health of our residents,” Gov. JB Pritzker said in a statement.

“Because of what we’ve seen nationally and across the world of the increased risk of large gatherings, this was the right call,” he continued. “Now that we’ve reached the stage where we’re seeing regular new cases—reflecting additional spread within our communities—we have to make every effort to minimize further spread.”

Illinois has recorded at least 19 cases of COVID-19 as of Wednesday. The number includes the eight new cases in the state identified Tuesday by the Chicago and Illinois departments of public health.

The city of Chicago made the decision to postpone the official St. Patrick’s Day Parade following guidance and information from public health experts, including the Centers for Disease Control and Prevention (CDC), the press release said.

St. Patrick’s Day parades in Dublin and Boston have also been canceled. New York City, which also hosts the largest parade in the U.S., had not postponed the event as of Wednesday morning.

New York City Mayor Bill de Blasio said Tuesday he had no plans to cancel the St. Patrick’s Day parade there at that point but officials would continue to monitor the situation.

“We see transmission in the home as the leading element, and transmission from people who had close physical proximity. It needs that direct connection. It doesn’t entirely fit to cancel big events,” de Blasio said in a press conference Tuesday. “Now, we’re going to watch that day to day, hour to hour. At a certain point we might say, ‘The numbers are telling us something different.’”

New York State saw the second-highest number of cases of the coronavirus Wednesday morning, with 173 people infected. Gov. Andrew Cuomo announced Tuesday he was sending in national guard troops to enforce a 1 mile-radius “containment area” surrounding a synagogue in New Rochelle, a town in Westchester County, about 17 miles north of Manhattan. The Young Israel synagogue is the epicenter of the outbreak in Westchester County, where most – 108 – of New York State’s cases were recorded.

Coronavirus: Up to 70% of Germany could become infected – Merkel

Coronavirus: Up to 70% of Germany could become infected - Merkel