The MLB season is looking increasingly precarious as the St. Louis Cardinals continue to deal with a coronavirus outbreak affecting its team.

The Milwaukee Brewers’ home opener against St. Louis was scrapped on Friday just hours before the first pitch after two Cardinals players reportedly tested positive. The team said in a statement that they learned Thursday night about the results from samples collected Wednesday.

Players and staff were instructed to isolate themselves in their hotel rooms.

On Saturday, The Athletic reported that between four and six additional members of the team and staff had tested positive. An MLB insider reported that the game, scheduled for later that night, had also been postponed.

Neither the Cardinals nor MLB have confirmed the new cases but another large-scale outbreak within the league would likely threaten the already fragile, shortened season.

The Cardinals played the Minnesota Twins earlier this week, who then went on to play the Cleveland Indians on Thursday and Friday. The Twins have not reported any positive cases as of yet. 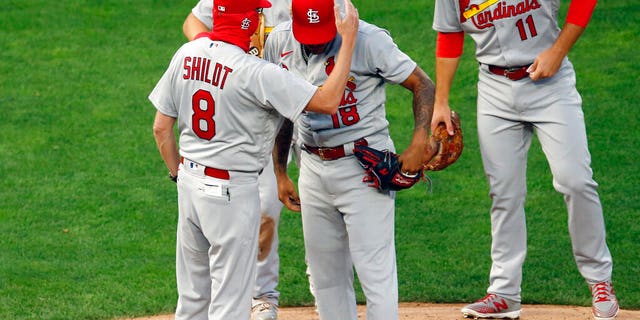 St. Louis Cardinals manager Mike Shildt (8) consoles pitcher Carlos Martinez on the cap as he pulls him following a solo home run by Minnesota Twins' Josh Donaldson in the fourth inning of a baseball game Tuesday, July 28, 2020, in Minneapolis. (AP)

The first team to be hit hard by coronavirus were the Miami Marlins. Their first reported case was last week but the total number of infected members now stands at 21, a source told The Associated Press on condition of anonymity.

The Philadelphia Phillies played the Marlins during that time period and no player tested positive. They did, however, have a coach and clubhouse attendant test positive.

Manfred and Clark talked about what needs to be done to finish the season, a person familiar with the conversation said. The person spoke to the AP on condition of anonymity because of the sensitivity of the situation.

The conversation between Manfred and Clark, first reported by ESPN, comes amid growing evidence that the spread of infection threatens to overtake efforts to play ball.

Given the tight timeline imposed by the MLB for regular-season games, if the schedule gets too thrown off, Manfred may be forced to cancel the season.