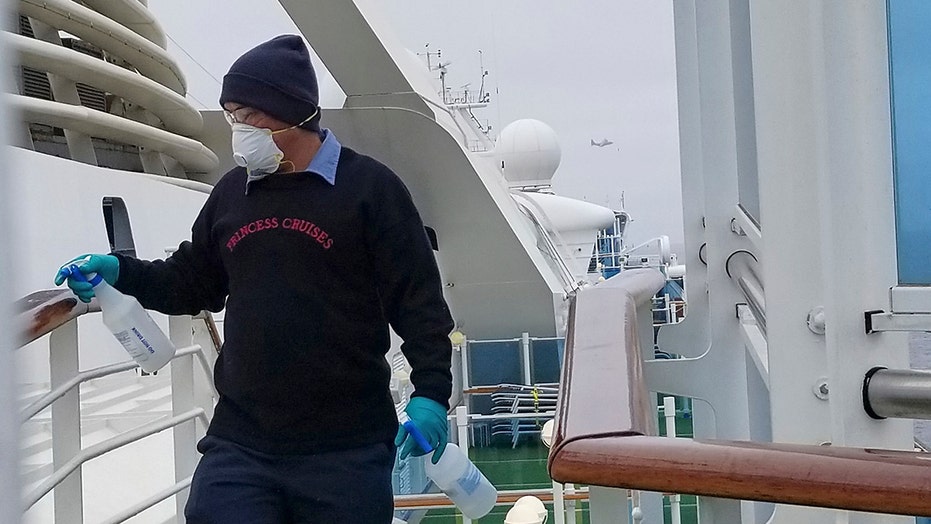 The potential legal and civil liberties implications of the coronavirus. Hank Greenberg; President of the New York Bar Association weighs in.

A passenger aboard the Grand Princess cruise ship with stage 4 cancer fears she may miss her next round of chemotherapy if she's forced to stay on the quarantined boat, currently stationed off the coast of California.

Kari Kolstoe of North Dakota, 60, and her husband Paul, 61, said they booked the cruise to help ease the stress of her medical treatments, according to Reuters. Her chemo is supposed to begin again on Monday, but it's unclear if she will be released in time to make it to the hospital.

“It’s very unsettling,” she told the outlet in a cellphone interview from the ship on Friday. “It’s still a worry that I’m going to not get back.”

The ship was headed from Hawaii to San Fransisco but was prevented from docking after 21 people began showing symptoms of the novel coronavirus, or COVID-19. California Gov. Gavin Newsom declared a state of emergency during a news conference on Wednesday and said the ship would be prevented from docking.

Vice President Pence, who is leading the U.S. response to the outbreak, confirmed the news on Friday and said the 21 symptomatic patients had tested positive for the virus, Fox 29 reported.

SXSW CANCELLED DUE TO CORONAVIRUS CONCERNS

Kari Kolstoe also told Reuters she's concerned about being exposed to the virus because her cancer puts her at an even higher risk of infection.

“I’m very at risk for this,” she added. “Me staying on here for a lot of reasons isn’t good."

She suffers from a rare form of neuroendocrine cancer that has spread throughout her entire body and weakened her immune system. This means she may not be able to fight off the disease if she ends up contracting it.

“God is with me. I know he is,” Kari Kolstoe told Reuters. “I recently lost my dad, and I just believe he’s up there, going to fix this little situation somehow, and I’m going to test negative and get to go home and get some treatment.”

On Thursday, 46 passengers and crew members were swabbed and the samples were flown to a lab in Richmond, Va. There were 24 negative samples, and one was inconclusive. Of the 21 infected individuals, 19 of them are crew members and two of them are passengers.

Those who are infected are expected to be quarantined, but their housing situation has yet to be determined. The ship is carrying more than 3,500 passengers to a non-commercial port over the weekend to test everyone on board.