A California UPS worker with a stash of weapons, 20,000 rounds of ammo and body armor was arrested after cops said he threatened a mass shooting at his workplace.

“He alluded to a mass shooting in his text messages,” Capt. Dan Pistor told the Associated Press. “I definitely think we avoided a tragedy.” 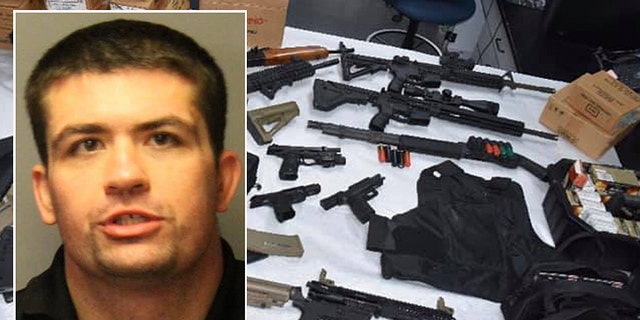 Mugshot for Thomas Andrews, 32, and photo of weapons cache seized from his home in Sunnyvale, Calif. (Sunnyvale Department of Public Safety)

Cops said Andrews had threatened to shoot up the UPS facility in Sunnyvale in texts to his boss.

He was arrested Sunday after a car chase with police, Fox 2 San Francisco reported.

“Several tactical backpacks containing ammunition were staged at the front door of the apartment where the suspect resides,” they said.

Pistor told the AP Andrews was upset with his employer, but he didn't know the specifics of those grievances.