A San Francisco woman has been at sea for nearly three months as she attempts to row her way across the Pacific Ocean.

Lia Ditton, 40, a licensed captain and self-described "professional adventurer," left San Francisco on June 17, embarking on a nearly 2,500-mile journey toward Hawaii — in a 20-foot-long rowboat — alone and without a support crew.

She's documented the journey on her website, where she describes encounters with sharks, dangerous weather, large waves, and fears of her boat overturning.

"Some days I am haunted by visions from the capsizes — water entering the cabin as if water were a person stepping inside," she wrote two weeks ago. "Then there are days like today, where I think the only thing missing from the equation is a slightly larger boat, some sails, a few more crew, and a lunch with fresh tuna!"

Another entry detailed an encounter with a large shark that woke her up early one morning.

"'Biff!' There is a soft blow to the stern. 'Biff!' Another one. Something is rear-ending the boat! My head torch illuminates a 10ft shark at the back of the boat. 'What to do, what to do… I can't have the shark damaging my rudder!'" she wrote. "His eye balls glint in the light. I keep the light trained on his head now, continuously, not to aggravate just to annoy until he backs further and further away."

Ditton hopes to set the fastest ever time for a solo crossing from San Francisco to Hawaii. Due to poor conditions and challenges from her small vessel, she abandoned her quest for the 52-day speed record set in 2014 by Rob Eustace and instead focused on beating the women’s record of 99 days, reports said.

According to her daily posts, titled "Lia's Log," Ditton is on day 84 of her journey and has traveled 1,992 nautical miles so far. She has only 105 nautical miles till she reaches the island of Oahu, where Honolulu is located.

Just three days ago she posted another encounter with a shark, along with a video, on Instagram.

"There is an explosion of white water a foot beyond my left oar. I sock the oar into the boat in one swift movement and watch," she wrote. "The predator is a dark mass with a flattish head – a shark. A yellowfin tuna darts towards the boat streaming blood."

According to the Discovery Channel, the early portion of her trip across the Pacific was impacted by a tragedy involving a fellow distance rower. 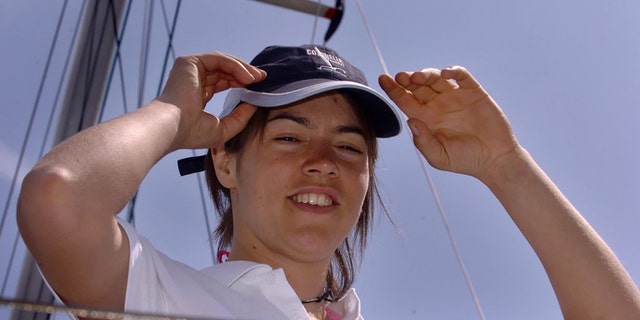 Angela Madsen, an American Paralympian rower, was on a similar journey from Southern California to Hawaii, but lost her life during some "routine in-water maintenance."

"As I rowed into the hours of darkness last night – striking out yet again for deeper water – little did I know, tragic news was being shared," Ditton wrote on Instagram. "To receive this news, while trying to cross the same body of water has left me with few words. I am still trying to metabolize what has happened."

"This morning I decided to sing. When I could do so without choking up, I filmed myself singing The Poor Wayfaring Stranger. The song is an enchanting Irish ballad, that always meets my sadness with equal beauty," she continued.

According to her website, Ditton was the youngest competitor and only woman to complete the 2,803-mile OSTAR 2005 single-handed transatlantic race — that sees participants travel across the Atlantic Ocean from Britain to the U.S.

Upon completion of the journey across the Pacific, Ditton is expected to break the women’s world record set by Roz Savage back in 2008, according to Hawaii News Now. She’s expected to arrive in Hawaii on Friday.

Ditton is originally from the United Kingdom. You can follow her voyage here.