raw video: A California woman set a trap for thieves at her home

This homeowner in California is just trying to flush out crime.

The Porterville resident recently decided to deter potential thieves in her neighborhood by setting up a motion-activated sprinkler.

"Our flood light didn’t seem to scare them off, so we decided to have a little fun with a motion-activated sprinkler that has an impressive amount of pressure," Katie Camarena wrote on Facebook.

According to Camarena, there have been recent issues with thieves coming into the neighborhood to "try and steal tools out of vehicles" in addition to "anything else they can get their hands on." 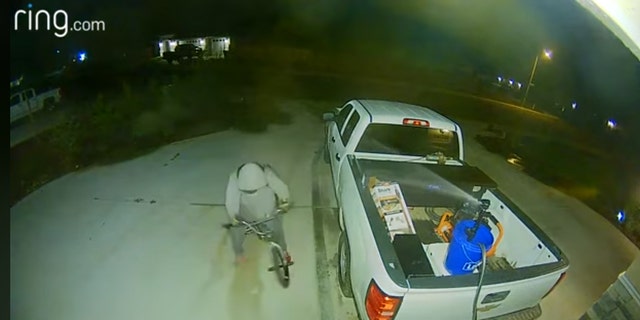 A person can be seen getting sprayed by a motion-activated sprinkler on Tuesday in California. (Ring Facebook Video by Josh and Katie Camarena)

In a video posted to Facebook by Camarena, someone on a bicycle who came to her home on Tuesday can be seen getting hit with a powerful jet of water after setting the sprinkler off.

The person on the Ring video then ducks away and peddles off.

Camarena said she got the sprinkler right off of Amazon.